Is The Man Who Is Tall Happy? Review 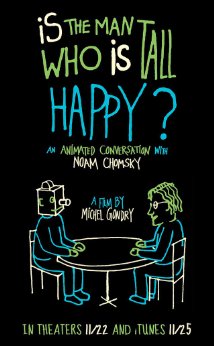 AKA: Is The Man Who Is Tall Happy?: An Animated Conversation with Noam Chomsky
Genre: Animated Documentary/Philosophical
Year Released: 2013
Distributor: IFC Films/Sundance Selects
Origin: France/USA
Running Time: 88 Minutes
Rating/Recommended Audience: PG
Related Films/Series: N/A
For Fans Of: Noam Chomsky: Rebel Without a Pause, Of Stars and Men
Notes: N/A
Fun Facts:
-This animated documentary was created by none other than Michel Gondry. He’s the same filmmaker responsible for Eternal Sunshine of the Spotless Mind, The Science of Sleep, and Be Kind Rewind. That’s not even getting into the several music videos he directed for artists like The White Stripes, Bjork, Kanye West, Radiohead, etc.
-It made it’s film debut at MIT, not some kind of film festival.
When I heard that there was an animated documentary that existed, I was quite intrigued. I had never seen a full-on documentary done this way. The closest experience I had was watching Danielson: A Family Movie, but only some scenes were animated.
This documentary was definitely something else.   Is the Man Who Is Tall Happy? is a conversation put to film with French director Michel Gondry and the esteemed linguist/political activist Noam Chomsky. The dialog the two of them have is accentuated with surreal images that correlate to whatever topics they talked about such as philosophy, language, childhood memories, and other subjects.   I must say that I did not expect the whole thing to be this way, but the animations themselves were quite creative with Gondry doing most of the work himself. I hadn’t seen this much autonomy in animation since Makoto Shinkai made Voices of a Distant Star. The visuals are a creative mix of stop-motion, hand-drawn animation, sketches, photographic backgrounds, and the occasional live-action shot (mostly of Chomsky talking) superimposed by various backgrounds and foregrounds depending on the scene.
I found the content of these conversations to be interesting most of the time. I certainly knew that there wasn’t going to be any stupidity going on given how intelligent Noam Chomsky is and Michel Gondry was legitimately curious about learning certain philosophical things. Gondry even admits to feeling stupid around Chomsky after some of the conversations, so he tried to re-frame some questions or add some context to them. It did give some conflict to this documentary and the situation was understandable since Gondry’s English is far from perfect (he even said so in the film) and he had trouble grasping certain concepts or even pronouncing some words like “endowment”. However, there were times that got really boring during their verbal exchanges like in the last third of the movie. I felt that certain points were repeated or were just too off the cuff.
While the exchanges were very intelligent, I thought that the overall message of the film was schizophrenic. I get that it was just a conversation with a film director and a linguist, but I didn’t know what Gondry was trying to achieve other than the fact that it was an animated take on them talking. Even the title of the film doesn’t make sense until the last 5-10 minutes of it’s running time and it comes out of nowhere. If you like Chomsky’s language theories and research, then I can see you liking it, but the people who enjoy his political insight will be disappointed with the exception of the scene where he talks about the Anti-Semitism in his neighborhood during his childhood. That was really intriguing when he mentioned dealing with it, but it was too brief.
While the visuals are very unique and eye-catching, I did find the documentary to be a bit pretentious and it had some flaws. The artwork is the strongest part of Is the Man Who Is Tall Happy?, but some of the designs were self-indulgent. That self-indulgence even bleeds into some of Gondry’s brief monologues. His ideology on live-action films vs. animated ones were fascinating, but I raised my eyebrow when he mentioned that he was more concerned about Noam Chomsky’s health than his own mother’s. Wow, Michel. Just wow. I also had trouble understanding what Gondry said a few times because of his thick French accent. There were animated subtitles which helped, but some of them were written in some elaborate cursive fonts.
Is the Man Who Is Tall Happy? is a quirky piece of animation with the undercurrent of philosophical talks with two people. There is a good amount of creativity which I certainly laud, but some of the content, while sagacious, can be tiresome and tends to be self-indulgent (especially on Gondry’s end being the filmmaker and animator). While this isn’t the best work for either men involved, it was a good watch although there were some shortcomings.
Adjustable Point System:
Add 2 points if you’re a Michel Gondry or Noam Chomsky fan
Subtract 2-3 points if you can’t stand philosophy
Pros:
-Quirky and effective visuals
-Substantive conversations
-The self-deprecating humor by Michel Gondry was effective
Cons:
-Conversational format can be a turn off
-Pretentiousness from the presentation and some of the questions
-The ending is too rushed despite being based on a real event to cut off the film
Final Score: 7/10 Points
Content Warning: This film doesn’t have that many objectionable things, but the content will go over children’s and even some adult’s heads given the intelligence involved in these animated conversations. The only real objectionable things were the words “hell no” being used in one of the animated scenes and where Noam Chomsky tells a story where some carpenters are smoking weed during one of their breaks. It’s a tame presentation more or less for most of the film.