The Garden of Words Review 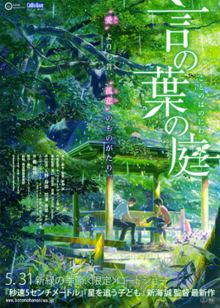 AKA: Kotonoha no Niwa
Genre: Drama/Romance
Year Released: 2013
Distributor: Sentai Filmworks
Origin: Japan
Running Time: 46 minutes
Rating/Recommended Audience: TV-14
Related Films/Series: Your Name, Weathering With You, Your Name (upcoming American live-action remake),
For Fans Of: 5 Centimeters Per Second, Honey and Clover, Whisper of the Heart
Notes:
-This review covers the Japanese version.
Fun Facts:
-This film has won the 2013 Kobe Theatrical Film Award and it even won the title of the “Year’s Best Animation” award from iTunes in their Best of 2013 list.

-The Garden of Words is the first Makoto Shinkai film not to feature Tenmon as the composer.

-Half of the scenery in The Garden of Words involved using real life photographs being drawn over with Adobe Photoshop. That’s not surprising given how realistic Shinkai’s backgrounds ban be in several of his films and his independent nature of animating dating back all the way to Voices of a Distant Star.

-The main character Takao Akizuki is voiced in the Japanese version of the film by Miyu Irino who has voiced Sora in the Kingdom Hearts games, Haku from Spirited Away, and has even done the Japanese dub voice of Vince LaSalle from Recess of all things.

I’m not going to lie to anyone here. Makoto Shinkai was one of those anime auteurs that I used to follow when he started getting buzz in America. Ever since I saw Voices of a Distant Star, I looked forward to his other works. I’ve also seen The Place Promised In Our Early Days and 5 Centimeters Per Second, but I stopped following anime close to the time that Children Who Chase Lost Voices was released. That’s not any fault of his, I just fell out of anime at the time.   Once I got back into Japanese animation and found out that he released more movies since 5 Centimeters Per Second, I thought I would check out this film from Shinkai and see how he’s progressed through the years.

To be honest, I have to drop my bias and critique this film for what it is for better or worse.

The Garden of Words is a short movie involving a 15 year old student named Takao Akizuki. He often skips school on rainy days as he’s drawn to the rain as opposed to sunny days like most people. He regularly goes to this garden, but he meets a woman by the name of Yukari Yukino who always brings beer and chocolate with her. They start talking after she responds with a Tanka (a Japanese poetry form using five lines) before leaving. Takao also has a hobby of making handmade shoes when he’s not at school.

Even seeing just the first few seconds of The Garden of Words, my jaw dropped after seeing how gorgeous the animation was. Not that Shinkai has ever slacked in the animation department despite Voices of a Distant Star showing it’s age right now, but he really outdid himself here. There’s photo-realistic backgrounds, intense attention to detail like raindrops stuck on a train window for a couple of scenes, and the lush, yet still natural usage of coloring and shading. You can take a screen capture of any part of this movie and call it art. The visuals are just that good.  The music provided by Daisuke Kashiwa was excellent as well. It is a disappointment that Tenmon wasn’t in this production, but there were some pieces that invoked that composer’s work in Shinkai’s previous films. The background music used during Takao’s speech to Yukino was powerful and really accentuated the emotions here. The ending theme “Rain” performed by Motohiro Hata (it’s actually a cover song originally by Senri Oe who wrote it in 1988 [coincidentally the same year Miyu Irino was born]) fit the theme of the movie so much.

As much as the visuals and music were top-notch, I have to admit that I was underwhelmed and even felt awkward watching The Garden of Words which pains me to say this. This film had a lot of things going for it and it does have a promising start. As someone who enjoys poetry, I liked the lyrical narration that Takao provided in certain scenes. The fact that Tanka poetry was used made me geek out when that poetry form was used as a plot point between the two characters. With that being said, it did feel rushed and there were some plot holes especially when it came to Yukino’s backstory. They do explain some of it, but they never have a chance to show it as much as they could have.

This also brings me to the most awkward element of the film. Takao is 15 while Yukino is 27. That raised some red flags to me and even more so when Yukino’s job was revealed later on which made the situation worse. I know some of this was intentional on Shinkai’s part as he’s deconstructing drama and romance tropes with the age dynamics, but this felt uncomfortable to me. When Takao was sketching and tracing Yukino’s feet to make a shoe prototype, I thought to myself “please don’t go there with these two.” Sure, the part where Takao lambasts Yukino near the end did help in that they didn’t go there with these two characters, but there was an element of being unrealistic since no 15 year old would wax that eloquently while deconstructing the flaws of an adult no matter how obvious it would be. I also hate to be that guy, but I did think a little bit about the plot after watching it and wondered if (pardon the metaphor) the shoe was on the other foot. Would this plot still be made if this was a 15 year old girl meeting a 27 year old man? That realization made The Garden of Words unintentionally creepy in a way.

I really wanted to give The Garden of Words really high marks because it was a Makoto Shinkai work, but this is not one of his best pieces in his filmography. While the amazing production and and scoring make this appealing to fans of animation, but some rushed elements of the plot and the awkward deconstruction of romance movies hinders it from giving me an enthusiastic recommendation. While The Garden of Words is far from horrible, I felt that this little film could have and should have done more with the story and characterization.

Adjustable Point System:
Add 1-3 points if you’re a Makoto Shinkai fan.
Add 1 point if animation quality is the only thing that matters to you.

Cons:
-The “relationship” between Takao and Yukino has bad implications
if the genders were reversed.
-Underdeveloped backstory with Yukino
-Rushed plotting

Content Warning: This got a TV-14 in Sentai Filmwork’s release on DVD and Blu-Ray. I can see why. Sure, there’s nothing in the way of violence besides one brief fight scene and there wasn’t any language in the Japanese language track I saw, but there are some sexual elements being spoken about despite not being seen. Yukino’s past is definitely questionable which is part of the reason why she’s quitting her job in an environment where that wouldn’t be acceptable. The biggest warning is the friendship with Takao and Yukino. Takao is 12 years younger than Yukino. Even though this isn’t a smutty movie, their interactions will raise eyebrows once Yukino’s age is revealed even though it’s already implied that she’s older since she drinks beer in the garden.