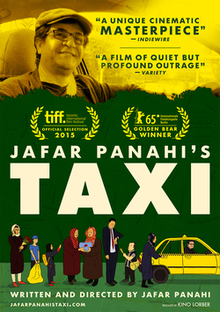 AKA: Jafar Panahi’s Taxi, Taxi Tehran
Genre: Docufiction/Comedy/Drama
Year Released: 2015
Distributor: Kino Lorber
Origin: Iran
Running Time: 82 minutes
Rating/Recommended Audience: PG-13
Related Films/Series: N/A
For Fans Of: This Is Not a Film, Drifts, A Taste of Cherry, Ten (Abbas Kiarostami film)
Notes: N/A
Fun Facts:
-Taxi was filmed with only three cameras: A regular consumer grade camera mounted on the dashboard, a point-and-shoot camcorder, and an iPhone. Also, none of the cameras ever get footage outside of Jafar Panahi’s car.

-This won the 2015 Golden Bear Award from the Berlin International Film Festival. Would you like to know which other films have won that award? Spirited Away, Magnolia, and even the original Disney version of Cinderella. Think about that.

-Taxi is the 3rd film that Jafar Panahi has created while serving his government sanctioned ban on making films, but it was the first one since then where he actually filmed something outside of his house.

One of the reasons why I started Iridium Eye is because of my boredom with several commercial films. There are the same old stories, characters, and tropes parading around the silver screen and I got bored of it. There are also some great movies out there that not many people haven’t seen unless they are knee deep in world cinema or at least the film festival circuit. Movies have become so safe in their storytelling and creations.

Taxi by Jafar Panahi is NOT one of those movies.

This docufiction film deals with Jafar Panahi going undercover in the streets of Tehran as a cab driver and picking up various passengers along the way. That may seem dull, but all of the passengers have their own stories and ideologies that Panahi hears while picking up and dropping off people. Some of them are superstitious like the two women who believe their pet goldfish have a sacred connection to their lives. There are some like one of the first passengers who openly declares that people such as thieves that steal tires deserve the death penalty while conversely a woman who’s picked up close to the same time believes in rehabilitation for prisoners. There’s even a pirate video salesman who lets people rent or buy pirated copies of things like The Walking Dead, The Big Bang Theory, alongside works by Kim Du and even Akira Kurosawa.

The interactions between Panahi and his passengers offer so much entertainment and insight on the culture around them. The whole film takes place inside the taxi which can be a bit claustrophobic, but I think that’s a brilliant artistic choice. It could be a metaphor of creating something in a constrained environment especially given Panahi’s legal troubles with his films daring to go against his home country’s guidelines for making movies and for censorship being a common action that’s taken against filmmakers in Iran.   When I first saw Taxi, I thought this would be another docudrama in the vein of This Is Not A Film, but I started to realize that this was a fictional work as I kept on watching. Despite being a fictional work, it doesn’t resort to mockumentary antics or reality show cliches. I can actually believe those interactions and situations happening. Even with Panahi’s penchant for neo-realism and cinema verite styles, I was surprised by how well the lines between fiction and fact were blurred. During my first viewing, I totally fell for this being a docudrama until the scene where the goldfish bowl breaks when he’s driving the aforementioned two women. The second time I watched it, I noticed things I never did before like how Omid the pirate video clerk was aware that a couple of passengers were non-professional actors. Sure, he was one of the few people who knew that Panahi was the cabbie, but his comment on that situation was just in passing and it only dawned on me the second time around. That was some brilliant writing and filming.

The best interaction hands down would be the scenes involving Panahi and his real-life niece Hana Saeidi. Those two were a riot together. He’s late to pick her up from school and once he drives over to the school where she’s waited an hour to see him, they have this hilarious stare down. Hana lambasts her own uncle for being late while comparing herself to the main girl from his own movie The Mirror (also referenced in This Is Not A Film), tells her friends that her director uncle would come in a nice car, and berates him for keeping promises to everyone except his niece. After she gives him the riot act, he just casually smiles and says “…and hello to you, too.” I was in stitches after watching that scene. Hana is just hilarious as this chatterbox who also wants to follow in Uncle Jafar’s footsteps in being a filmmaker since she brings her camera along to make a movie for a school project while fretting about whether her film would be distributable.

The cinematography won’t impress anyone, but they’d be missing the point. In theory, anyone with access to a regular-grade camera and a smartphone could probably pull something like this off from a visual standpoint, but the low-budget nature works very well. Jafar Panahi knows how to make quality films without the budget of a Steven Spielberg or a Stanley Kubrick. It’s about the execution of the filming, the storytelling, and the usage of making do with what he has regardless of his film ban or not.

The plot may confuse people for being a slice-of-life thing, but that’s just the tip of the iceberg. Sure, the interactions are quite believable, but the casual viewer may have to pay more attention as to what’s going on. There’s the cultural elements that some people may not be aware of, but some of those factors are self-explanatory. The ending does come out of nowhere, but let’s just say it’s a callback to a conversation Jafar Panahi has near the beginning of the film and a metaphor about artistic censorship, and I’ll leave it at that.

Speaking of censorship, that’s the biggest motif of the film and it’s beautifully handled in overt and subtle ways. The scene where Panahi is looking at an iPad containing pictures of an assault case was interesting because the viewer doesn’t see the pictures. Hana’s concerns about making a distributable film come up as she’s trying to follow her teacher’s instructions. She’s so adamant about her project that she scolds a boy stealing money to give it back (context: she caught the thief on her camera) not because it’s the right thing, but because it would make her film compliant with her teacher’s instructions which mirror the Iranian’s government’s restrictions on filmmaking. I won’t go into all the details about all the guidelines, but the one that stood out to me was the rule that filmmakers can’t use “sordid realism.” By sordid realism, they mean to make the movies realistic, but they can’t show things that are dark and/or depressing. Jafar Panahi responds to Hana’s concerns by saying “There are realities they [the Iranian government] don’t want shown.” This was so fascinating to me because even though the Hollywood system doesn’t have the constraints like Iran does especially the religious aspect, but I don’t think the sordid reality issue is too far off from here. I mean, certain themes are almost never shown in a typical commercial film such as poverty or genocide unless it involves another country (see Slumdog Millionaire or Hotel Rwanda, respectively), racial discrimination unless it involves certain aspects of the Civil Rights movement or at least Jim Crow America (Selma or The Help, anyone?), or even some historical events. It reminded me of Danny Glover’s attempts to make a movie about Toussant L’Overture, the Haitian Revolutionary, but never got a chance to get the funding because the execs didn’t want to make a period piece war drama like that because that event involved Haitian slaves rebelling against their French masters. Just because a studio is in a first-world country, it doesn’t mean that they don’t have their own restrictions as to which films get the green light to be shown to millions of people.

Taxi is a brilliant film that is incredibly brave. The character interactions are splendid with all the different passengers around. The neo-realistic cinematography adds to the veracity and grit displayed. The themes on censorship are impeccable and the film portrays the ramifications of being censored with some of the conversations involved. Taxi may not be a film for everyone, but I recommend people to give it a chance to see this bold docufiction that blends fact and fiction into a fine piece of cinema.

Adjustable Point System:
Subtract 1-2 points if you only like big-budget films.

Cons:
-Claustrophobic filming
-The ending can throw some people off-guard.
-Some plot holes with some passengers’ stories

Content Warning: I’d say teens and up. There’s one scene where a passenger suffers from a motorcycle collision and he is quite bloody. There’s also some brief strong language with some of the characters including a kid who drops some strong profanity when he’s talking to Hana. Personally, younger viewers won’t get Taxi’s themes and may get bored.