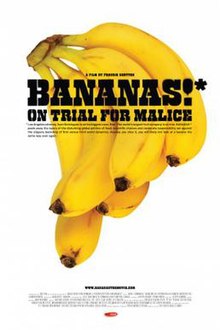 AKA: Bananas!*: On Trial For Malice
Genre: Documentary/Legal Drama
Year Released: 2009
Distributor: Oscilloscope Laboratories
Origin: Sweden/Nicaragua
Running Time: 87 minutes
Rating/Recommended Audience: PG-13
Related Films/Series: Big Boys Gone Bananas!*
For Fans Of: The Corporation, Black Gold, Food Inc., Fast Food Nation, King Corn, Fresh, The World According to Monsanto, Mickey Mouse Goes to Haiti
Notes: N/A
Fun Facts:
-Juan J. Dominguez, the lawyer featured in Bananas!* has been awarded for his work ever after the events that took place in this documentary. He was named the Latino Attorney of the Year from the Hispanic National Bar Association in 2013 and Attorney of the Year from the Consumer Attorneys of California.

-Bananas!* almost got banned from US distribution by the Dole Food Company because of alleged defamation, but they eventually dropped the suit.

-Nathan Larson scored this documentary. He’s the ex-guitarist from Shudder To Think and played bass for Swiz. He’s also married to the lead singer of Swedish band The Cardigans who you might know for their song “Lovefool” which was big in the 90s.

You won’t be looking at bananas the same way again after watching this documentary from Swedish filmmaker Fredrik Gertten.

I became exposed to the strangely punctuated Bananas!* after doing research while reviewing The Corporation (review coming soon at the time of this post). It was produced by Canadian filmmaker Bart Simpson who helped establish a fund to protect filmmaker’s 1st Amendment rights and I stumbled across this doc. I remember watching some similarly themed docs in the past like Food, Inc. and Black Gold, so I wanted to see how this held up.

Bananas!* deals with a legal case that was unprecedented before. The documentary flips between Los Angeles and Nicaragua. In the latter location, Dole has set up banana plantations and get impoverished workers in the rural part of the country. There’s some issues that have happened since the 70s though. They’ve underpaid workers, make their banana employees be treated like donkeys while carting off these crops, but the biggest ailment would be the use of pesticides, namely DBCP AKA Nemagon. The company would fire cannons loaded with this chemical that puddles would occur over the plantations and the exposure to the chemicals have caused several workers to become sterile. Cuban-American attorney Juan J. Dominguez caught wind of the story and flew over to Nicaragua to help the workers stand up to Dole.

I never paid that much attention to the produce and agricultural industries, but I might have to after watching Bananas!*. Seeing the conditions of the banana plantations being doused in chemicals while the workers couldn’t fight back was just heart-wrenching. This wasn’t done in Managua or any of the other major cities in that country, it was in a small rural community where the people are poor and some of them were even illiterate. The scenery in Nicaragua shows this lush land, but it was adulterated by the corporate presence. I also appreciated Juan being into law for the right reasons and for being someone who’s wanted to take on large multi-national entities whenever they’ve done something wrong. I can feel his frustration since so many companies have gotten away with things that any normal person would be jailed for if they did the same thing. This situation also beats the crap out of white man’s burden syndrome by having a Latino man going into Nicaragua. Juan is fluent in Spanish, knows the cultural aspects, and even he’s known what it’s like to be poor since he came from a lower-class family from Cuba before moving to America when he was ten. He even mentions that he “kissed the ground” once him and his family got to Miami. That was a huge plus and adds to the human element unlike other documentaries such as OT: Our Town no matter how well-intentioned they may be.

Several scenes revolve around getting evidence, testimonies from some of the workers, and bringing the case to the courtroom. Juan and his team collect interviews from the Nicaraguan workers which was great despite the practicality of the situation. It was good hearing the stories from the workers themselves instead of having others speak for them. No, the translator in the courtroom doesn’t count. He was only repeating what the plaintiffs were speaking to the Anglos in the trial. Some of the video evidence of the maltreatment of the workers was saddening. The image of one young man walking barefoot while being attached to a conveyor of bananas was just cruel. He was treated like a donkey moving the fruits around. Some of those images will invoke emotions out of anyone.

The cinematography is well done. The visuals are certainly of high quality. They even through cityscapes and landscape footage as good in-between footage. The visuals do get fuzzy and pixelated during the courtroom scenes which were jarring compared to the other portions of the films. It wasn’t the filmmaker’s fault on that one despite the drop in quality because it was from a third-party source for the live camera feeds.

They do show the other side of the story, but only in the courtroom. You see Dole’s CEO/President David Delorenzo testifying and Rick McKnight who is the company’s lawyer. It was frustrating hearing some of the defense stories. Sure, there was honesty as to how they got into the business and many of those reasons were innocuous, but it was frustrating with all the victim blaming and other bad things that were presented in the court. One quote that caught my eye that had some subtle horror to it was “Nicaraguans are the friendliest people in Central America” and that’s why Dole wanted to do business in that country. That quote may sound innocent out of context until you compare it to other events such as Christopher Columbus saying that the Tainos and other native tribes being loving and “wanting to share with everyone…They would make fine servants.” That connection came at me instantly. I know it’s not the same thing as Columbus and his men killing and raping the natives, but the workers were still being taken advantage of by predatory business practices all to save more money.

While Bananas!* has a lot of high quality content, I wish this documentary could’ve been better in certain ways. I’m not going to bash Juan’s efforts to help the Nicaraguan workers. He deserves all the praise in the world about it. One scene that did hinder him in a way that I don’t think the filmmakers realized was the scene where he’s driving around LA in a bright red Ferrari. I know he’s a lawyer in California, so he’s going to have a lot of money, but he still flaunts it. Not to mention his reasoning for getting a red Ferrari was because of his Cuban heritage where he wanted something loud and ferocious. Besides that, some of the testimonies were conflict were contradicting. It was hard to tell if they were pressured to lie to save their lives or they did it just because. That made me sympathize with some of them even less. During the later portions of the trial, Duane (a lawyer on Juan’s legal team) returns from the court after making some winning arguments against Dole. Juan suggests that they should get some Cuban-themed drinks. One of the drinks involves pineapple juice in the mix.

I double facepalmed when they did this. Good on Duane for refusing the pineapple mixed drink and for getting a beer instead, but shame on the rest of the team for buying something from their opponents in this legal case. That was only a brief scene, but it alone prevented me from giving this a 10/10.

The last fifteen to twenty minutes was hit and miss for me despite the obvious realism of the situation. I’m going to mention some minor spoilers while doing my best to avoid some of the bigger ones from the ending. Juan’s team refuses a settlement offer and decide to take this case all the way to trial. Some of the results were disappointing even though I felt that some of those things would happen in the final verdict. The final verdict itself isn’t the final nail in the coffin against corporate abuse. The war is just beginning. Dole’s lawyers even felt smug about what happened and they brought up some points that I had a hard time arguing against. One quote that I found important was from Byron, who’s the son of one of the banana workers. “The general doesn’t care how many people die. He just wants to win”. That was very powerful. The fact that this movie almost didn’t get released in America did make me sympathize with Fredrik Gertten and company. It’s an issue I’ve been trying to pay more attention to after finding out movies like Jungle Emperor Leo almost got banned in North America for stupid reasons.

Bananas!* is an eye-opening documentary that will make you think about buying produce. I thought it was great how they let the workers tell their stories and to see lawyers do the right thing to fight for corporate accountability and proper worker treatment. The footage was great and is top-tier in that regard when it comes to documentaries without being overproduced. I did get concerned with some hypocritical scenes (the Dole Pineapple juice scene REALLY didn’t help) and some aspects of the ending having some downer elements while still having positives. I would still recommend Bananas!* to any open-minded person out there.

Pros:
-Great cinematography
-Powerful testimonies and evidence for the plaintiff’s case
-Duane is one of the best lawyers despite not being the main focus

Cons:
-Some hypocritical scenes
-Some parts of the ending are sad despite being real
-The legal strategy should have been improved

Content Warning: There’s some swearing, but it’s not a big deal. There are some disturbing images with the workers in their pesticide-infested plantation. There’s some talk about sterility and testicle cancer involved with some of the workers. One scene has a nude picture in the background.