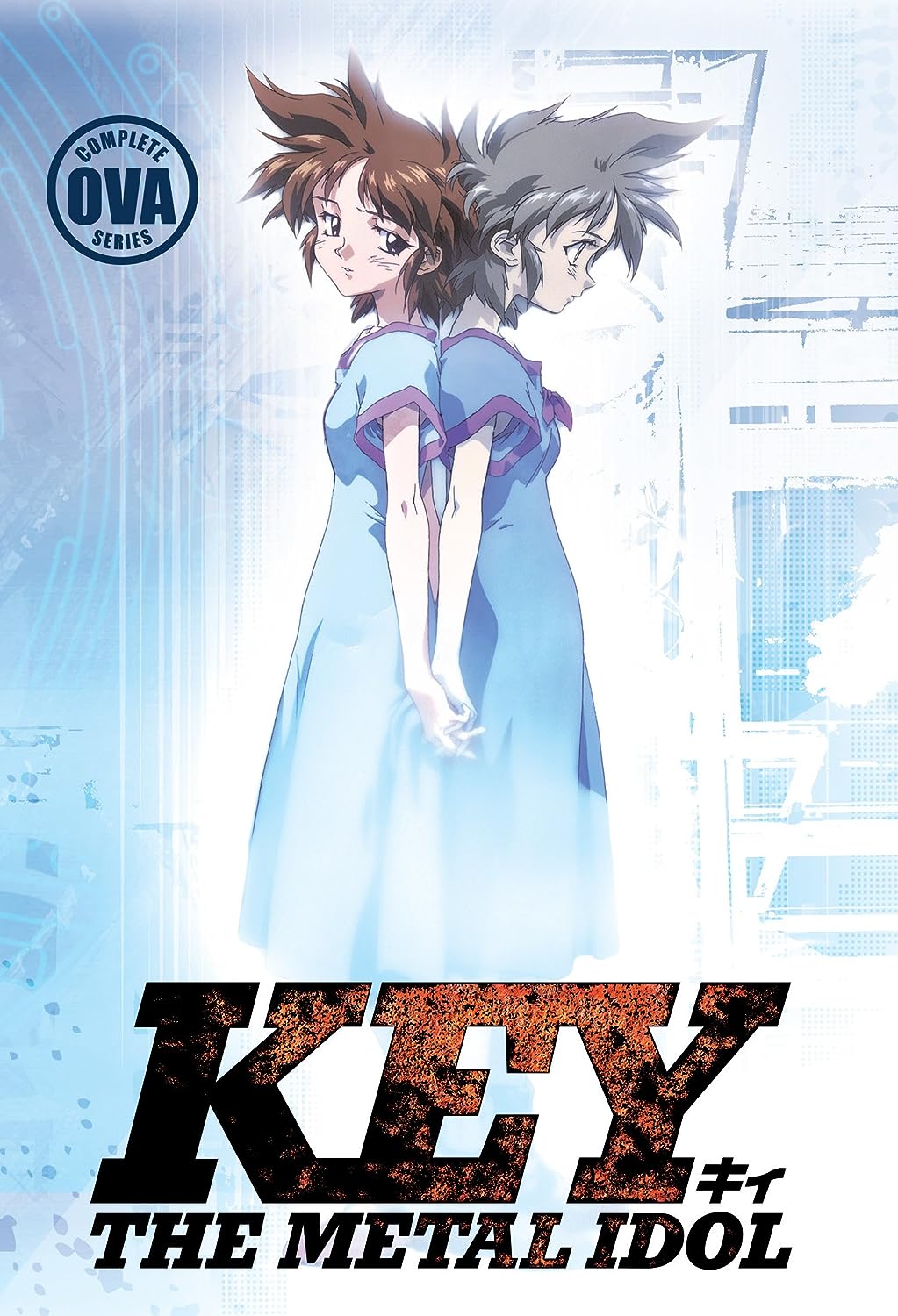 Discotek has been on a roll by rescuing anime licenses left and right.

I was thankful that they did so after Viz Media lost the license to this experimental OVA series. I watched it months ago and found out that Discotek was going to re-release it in February 2017. Good on them for doing that.

Key the Metal Idol is definitely not a typical anime series. The episodes can be as much as a TV series or movie length like the last two episodes. This was made before Evangelion was a gleam in Hideaki Anno’s eyes and I’ve wondered if Rei Ayanami is based on the title character given their emotionless demeanor and both of them are in series dealing with robots.

The story is about Tokiko “Key” Mima who is a robot who finds out that her “grandfather” Dr. Mima is dead. On a cassette player, there’s a recorded message for her to find 30,000 friends in order to become fully human. She leaves the rural Mamio Village and goes to Tokyo where she can realize Dr. Mima’s goal.

It sounds mainly straightforward, but there is a cast of characters and lots of plot twists to make this an intriguing watch. Rounding out the main cast is Sakura Kuriyagawa who works multiple jobs to help herself and Key. There’s Shuichi Tataki, who’s a self-proclaimed martial arts otaku who also helps run a fan club for a certain singer. Wakagi is Key’s no-nonsense bodyguard who has some secrets about her life. There’s even a cult leader by the name of Prince Snake-Eye who is sleazy, but is a lot more well-meaning than he comes across. The singer that Tataki supports is Miho Utsuse who is shrouded in mystery despite making music that’s really popular.

The storytelling is surprisingly good. There’s a lot of subtlety with the dialog and character interactions that foreshadow and lead to some unexpected events. The element of mystery lingers over it which made me want to watch more and more. It was definitely the case with Key’s personality. Most of the time, she’s emotionless and extremely socially awkward around people. There are moments where she does become human for a few seconds and she becomes very emotional showing sadness, joy, and pure anger in one scene. After a few seconds, she reverts to her robot form and doesn’t remember what just happened with her.   The animation is okay, but nothing too groundbreaking. This came out in the 90s which definitely shows with the animation style and some of the cultural artifacts. Key the Metal Idol was made by Studio Pierrot which isn’t a great place for quality animation production unless it’s the occasional fight scene for any Shonen Jump-related series they’ve animated like Yu Yu Hakusho, Naruto, or Bleach to name a few. At least there was more effort put into it compared to other 90s Pierrot productions, so I do appreciate that.

In addition to the quality plot and characters, I really liked the satirical aspect of the music industry probably more than I should. This paragraph will contain some minor spoilers, so I’m just going to warn you in advance about it. Anyways, Miho Utsuse’s management company/label is Production Minos which is owned by the main villain’s company Ajo Heavy Industries. She’s singing these songs behind the scenes as robots are her backing band and a robot clone of her is on stage where her voice is passing through. What people don’t realize is that the same technology used to make these automated fake musicians is also manufacturing arms. I thought that was a great connection just like how media companies are either bought up by larger conglomerates that control various aspects of the media or have ties to other industries including some weapons manufacturers. I’ve never seen this done in an animated context before, so it was very fascinating how the people who buy her albums and go to her shows also fund another shady business and not even realize it.

While there are praiseworthy things about Key the Metal Idol, I do have to bring up some of the flaws. The biggest one is episode 14. Sure, there’s a lot of important things, but my patience was tried as most of the 95 minute episode involved Tataki and Wakagi dumping loads of exposition to fill in all the plot holes. That was unnecessary despite having a purpose. At least the final episode more than made up for that. Also, the English dub was mediocre. Key shouldn’t have any effects on her voice to sound like a robot in that version. The Japanese track was good, but I couldn’t stand Sakura’s voice which annoyed me for being too high-pitched for her character. I did prefer the English dub voice for Sakura there. I also thought that they could tone down some of the sexual elements. It’s not pornographic, but I didn’t see a point for some of the nudity scenes. Sometimes it worked with Jinsaku Ajo being a sexual deviant that he is, but it wasn’t necessary for other scenes.

Key the Metal Idol is certainly a hidden gem from the 90s that may have influenced other anime series that came out years after it. The story is creative and there’s legitimate artistic merit despite the aged animation. This is something you can binge watch in little blocks, but watch out for episode 14 though. It’s certainly something that’s underrated and was cleverly written.

Cons:
-Aged animation
-Episode 14 being an exposition dump
-Some unnecessary sexual undertones in some scenes

Content Warning: In the original Viz release of Key the Metal Idol, they gave it a 13+ rating. I STRONGLY disagree. There’s plenty of blood in the fight scenes and one particular death involves a human head getting crushed. There’s some language, but it’s way stronger in the English dub. There’s some nudity with some shower scenes, graphs, and with some female androids. Not to mention there is some disturbing sexual undertones and overtones. The way the lead villain Jinsaku Ajo fawns over his female robots will make you want to throw up in your mouth.