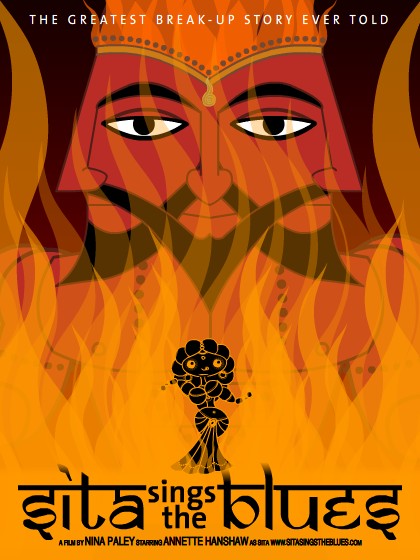 AKA: N/A
Genre: Experimental/Fantasy/Musical
Year Released: 2008
Distributor: GKIDS
Origin: USA
Running Time: 82 minutes
Rating/Recommended Audience: 13+
Related Films/Series: N/A
For Fans Of: It’s tough to say which films are just like Sita Sings the Blues given the unique nature of the animation involved.
Notes:
-The original self-released DVD was used for reviewing purposes.
Fun Facts:
-Sita Sings the Blues is based on the ancient Indian tale of Ramayana while making a parallel with creator Nina Paley’s life.

-Nina Paley is a staunch free culture/copyleft advocate. This film even uses a Creative Commons License even after GKIDS gave it major distribution.

-The singing scenes used recordings from the 20s of singer Annette Hanshaw, but she was hit with copyright infringement during the first release of this film. The rights have been cleared now.

-Dan Green (Yugi from Yu-Gi-Oh!, Genya from Giant Robo, the adult version of Leo/Kimba from Jungle Emperor Leo) helped out in voice production.

What’s this? I’m reviewing an American animated film for once? Someone, please check up on me!

Okay, in all seriousness, this is a first for Iridium Eye since independent American animated features are so hard to come by especially something that isn’t distributed by Disney, Warner Brothers, Dreamworks, and the other usual suspects when it comes to animation. Once again, I went to GKIDS for their distributed filmography and discovered this particular film.

Sita Sings the Blues is about two paralleling stories while using several methods of animation. The first story is an adaptation of the Ramayana. It’s an old Indian story that deals with the title character Sita who falls in love with the exiled prince Rama. They become wedded, but she gets taken by Ravana who is the demon king in the land. She longs for Rama to rescue her and to be with her beloved while being blindly devoted to him. The second story takes place in real life. Nina Paley lives in an apartment in San Francisco with her husband and cat. Her husband Dave gets a job opportunity in India which starts as a six-month stint but eventually becomes longer due to an extended contract. Being thousands of miles away creates both physical and metaphorical distance between the both of them.

I will say that Sita Sings the Blues has a unique presentation going for it. This film uses a mix of several animation forms such as shadow puppets, Indian art, cut paper animation, stop-motion, vector graphic animation, flash animation, rotoscoping, photography, and squigglevision like some surreal mosaic. I thought it was quite original from a visual standpoint which is something I admire. Sita Sings the Blues is a truly unique movie much like Strings or how Haibane Renmei was in terms of anime. One highlight of this movie is the “Sita’s Fire” scene which needs to be seen to be believed while having an awesome song attached to it. I won’t provide context to that scene, but it’s quite enjoyable and it could be a music video in isolation from this film.  The parallel stories were interesting, and I thought it was great to find the connections between the Ramayana and Nina’s life. The distance between Rama and Sita mirroring that of Dave and Nina were linked in intriguing ways. I do admit that I’m a sucker for parallel narratives especially when done right. Wouldn’t it be crazy if anyone did that for a current creative project? Cough! **Hollandus Landing** Cough! Okay, enough self-promotion aside, I did like the ties between this Indian epic and Nina’s autobiographical life.

The musical aspects were well-played despite some of the flaws. I thought the audio clips of Annette Hanshaw being used as Sita’s singing voice worked much better than I expected. I did like some of the stealth puns like how Sita uses bananas as visual aids for telephones (insert obvious Raffi joke here) or in one of the songs, a deer pops up when Hanshaw’s voice says “dear” as she refers to her lover. The “Rama’s Great” song was better than it had any right to be. It has this nursery rhyme melody while bursting into big sounds. What really made this great was the usage of the lyrics with the accompanying ball bouncing over the words like those Disney sing-a-long VHS tapes I remember watching as a little kid. That was hilarious in its presentation. However, after mulling it over with the usage of the music, I had an epiphany. Sita Sings the Blues is a glorified jukebox musical. Most of the music involved the Hanshaw songs with very few original songs. That wasn’t always the best choice because I really don’t like jukebox musicals. I know movies and shows such as Across the Universe, Moulin Rouge, and Glee have their fans, but I don’t want to see this in a movie that’s supposed to be artistic.

I did have some umbrage with the Sita/Nina parallels despite making the plots interlace with each other. I get that Nina Paley was trying to present Ramayana from her perspective which is a nice touch, but how she was written made her into a Mary Sue character. Don’t get me wrong, Rama does become cold to her like how Dave becomes cold towards Nina, but I can’t name a single flaw with both female protagonists. That’s the problem when it comes to fictionalized autobiographies, it allows the main characters to become literal self-insert Mary Sues who are too perfect for their own good or are innocent victims who never did anything wrong. This flaw also revealed the plot holes in Nina’s relationship with Dave and how certain aspects were never explored further like the viewer has to accept everything that’s going on without question. There’s even a controversy involving the adaptation of Ramayana. She did tweak some of the characters to fit the coalesced narrative of her relationship with Dave which I get, and Nina has even admitted that Rama wasn’t portrayed in a positive manner compared to the original story. To be fair, some of the shadow puppet characters do touch on some aspects and flaws of the characters, but I felt that Nina Paley may have been over her head in parts of the film and not been that in-depth with Indian culture. I’m not saying that someone like her has the right to be clueless, but when you’re dealing with cultures and ethnic groups that are different than you, it’s really imperative to research your stuff when you’re making art.

Sita Sings the Blues is a fresh and original movie that has effort, but not all of it translated on the screen. The production is impressive despite the limited budget compared to her Hollywood counterparts. The music is a treat even though most of it isn’t original. There were some legitimately funny moments and some emotional scenes which could make most viewers intrigued. The animation is creative although it can be schizophrenic despite the intentions and aesthetics to match parts of the overall story. It’s a unique animated film that is better than what big studios have been churning out for years, but it could have been so much more.

Adjustable Point System:
Add 1 point if you really care about originality and creativity  above everything.
Subtract 2 points if you want all animated parts to look alike.

Pros:
-Unique presentation and artistry
-Great usage of music
-The parallels between Ramayana and Nina’s life

Content Warning: This animated movie isn’t quite as adult from an objectionable standpoint as South Park or Family Guy, but I wouldn’t recommend it for the kids. There are a couple of swears used in it and some sexual references involved. The Mother Earth character is nude, so that would bar the kids despite her limited appearances. The violence gets surprisingly gory despite the bright visuals with one part showing Sita singing while there’s a river of blood and severed demon limbs in the background. There’s even an element of fridge horror with Rama walking over and kicking a pregnant Sita. I get that it’s supposed to be comedic, but that scene is way darker than it had any right to be.