Please Vote For Me Review 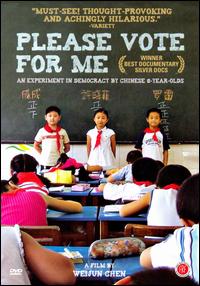 AKA: N/A
Genre: Docudrama/Political
Year Released: 2007
Distributor: First Run Features/Red Envelope Entertainment
Origin: China
Running Time: 58 minutes
Rating/Recommended Audience: G
Related Films/Series: N/A
For Fans Of: Dinner With the President, Rushmore, Campaign! The Kawasaki Candidate
Notes: Special thanks to my friend Anna Thomas for telling me about this documentary.
Fun Facts:
-Please Vote For Me has been viewed on the BBC and with PBS’ Independent Lens programming block.

-This is part of the “Why Democracy?” film series which details how democracy is viewed by independent filmmakers around the world.

-Wuhan is the 7th largest city in China with over 7.5 million people living directly in that city.

Even though I’ve reviewed films and documentaries with political elements and other undertones, I do confess that I’ve had my issues with them. Long before I started Iridium Eye, I’ve seen some political pieces in passing and several of them have left a bad taste in my mouth. I’m not going to name any names, but I’ve seen stuff that’s hyperpartisan (on both sides of the American sociopolitical spectrum), poorly researched, or just an excuse to smear movements or people. I wanted to opt for something with a good impact, but something that isn’t so callous.  …and then came this little movie I was told to check out with a fascinating concept.

Please Vote For Me is a short documentary that takes place in Wuhan, China. There’s an elementary school called the Evergreen Primary School in that major city where there’s an experiment that happened to a group of third graders. For the first time ever at Evergreen, a class will assign a class monitor through a voting process. Three kids are chosen as candidates to be class monitors in Mrs. Zhang’s homeroom. There’s Cheng Cheng, a chubby boy that enjoys watching TV and singing. There’s Xu Xiaofei, who’s a very shy girl who has trouble speaking up. The last kid is Leo Lei. He’s been the class monitor for two years in a row in previous homerooms at Evergreen and he has a tendency to boss others around even before this inaugural election in the school. The rules of this class monitor election are simple as they try to get votes from their classmates. They have to perform at a talent show, debate each other, and deliver a speech before the class’s election day.

I must say that the concept of Please Vote For Me is quite unique and insightful. Sure, here in America, most schools have student councils, class presidents, class representatives, and other similar positions. However, in China, this is a HUGE deal. We’re talking about a country that operates under a communist republic, so the fact that this third grade classroom is emulating what would be considered a “Western” ideal in terms of who gets to be in charge. This class experiment was fascinating since the kids were really excited to take part in a democratic process, but at the same time they learn what it’s like to lead and how to be a good leader that the other children can look up to.  The interactions with the three candidates are quite hilarious in their own right. You have all three of them trying to get assistants for their campaign (as per the experiment’s rules), but you also have them bribing some of their friends to get positions like vice monitor or some other lofty positions in this exercise in classroom politics. There are even smear campaigns against the opposition which gets brutal. A lot of the things that happen throughout this documentary mirror most elections, but in an elementary school context. The big one which was somewhat hilarious in hindsight to me were the debates. Yes, there are personal attacks, but they also bring up issues of the campaign trail. I find it to be a bit charming and one time, I said to myself: “Wow, those kids had more mature debates than what happened in the last election.” Keep in mind, these are third graders who are doing this stuff. It was also funny with the talent show because you have them singing and Lei plays the flute for part of his performance.

Even though it is just for a class monitor position, you can tell that this is a big deal for all of them. All the kids at one point cry or have tantrums whenever something bad happens. There’s an emotional roller coaster with all of them and it really shows in their interactions with Mrs. Zheng, the other students, and each kids’ respective parents. One scene that I thought was interesting was Cheng doubting himself on getting votes. This was after Lei brought the entire class to the city’s monorail to check out Wuhan’s cityscape. What gave this bribe disguised as a field trip more gravitas was that Lei’s dad is a police officer for Wuhan’s department and it showed off his father’s connections to various landmarks and the city at large. After being chastened, Cheng wants to drop out, but Mrs. Zheng asks him this question (paraphrased): “If you quit in the middle [of the race], then how will you act in the future?”. That was a powerful piece of dialog. If I can be brutally honest, I wished my teachers told me this when I was their age. Even when I was in high school and college, NO ONE told me this. Xiaofei also learns how to stand up for herself after she’s being made fun of. During one of her earlier speeches, she gets booed by the opposition to the point where she can’t talk over them. Luckily, Mrs. Zheng wanted none of the hardcore smearing and forced the kids to apologize.

This plot had a bunch of twists and turns in it. I seriously had no idea who was going to win this election with different aspects swaying to and fro depending on the situation. You think one student has it in the bag after a debate or a random interaction only for it to switch at an instant. I won’t spoil who wins, but it really came as a bit of a surprise for me, but at least I can see why the candidate won. It made me think about the process at large and how it affected Mrs. Zheng’s class.

While Please Vote For Me is a charming documentary, I’d be lying if I said it was perfect. The biggest flaw is that this documentary is too short. It’s not even an hour long, and I would’ve liked to see at least ten to twenty minutes more in terms of content. Granted, I’ve seen short documentaries such as Hate Crimes in the Heartland or Insane Fight Club II for example, but some better time management could have been done here. I think one thing that would have really given this doc some more impact would be to show more of the aftereffects of the election. Possibly, you can see the next few weeks or months showing how the winner handles their responsibilities after election day in Evergreen Primary School. I would have really liked to see what happened and how the class monitor uses their new authority. Some more background with the families would have been nice, too. I think Xiaofei would have benefited the most from it. She’s being raised by a single mom and you don’t know all the circumstances other than the fact that she’s divorced. That scene where Ms. Xu describes what it’s like for her daughter to not have as big of a support compared to the boys was touching, but some more interaction between the mother and daughter would give her story arc more gravitas.

Please Vote For Me is a quirky documentary about democracy that’s done in a creative way and it’s something anyone can enjoy despite their political ideologies. The class monitor campaign trail was quite amusing in itself with all the work that goes into it. This documentary doesn’t overstay it’s welcome and has a decent story with the time it got, but there should’ve been more of an ending besides a brief clip of the school doing their morning rounds of exercising outside. The interactions of how they unintentionally mirror real presidential elections are quite an insight about the ups and downs of an election process. While being a bit short, Please Vote For Me is a painless watch that’s worth seeing.

Pros:
-Fascinating comparisons and contrasts between the class monitor elections and China’s sociopolitical climate
-Great drama and insight into the candidates
-Lots of witty and funny moments during the campaign

Cons:
-The running time is too short
-Lack of backstory with the children’s families
-The ending should have been expanded

Content Warning: This is a tame documentary. Granted, most of the film takes place in an elementary school, so there wasn’t going to be anything rough despite some profanity-free bullying. Cheng is also shirtless in some of the scenes where he’s at home. Younger kids may not fully get the cultural context with China’s political situation or why the class election is considered to be a huge deal to everyone involved, but they may enjoy the antics of the kids trying to win votes in their classroom.