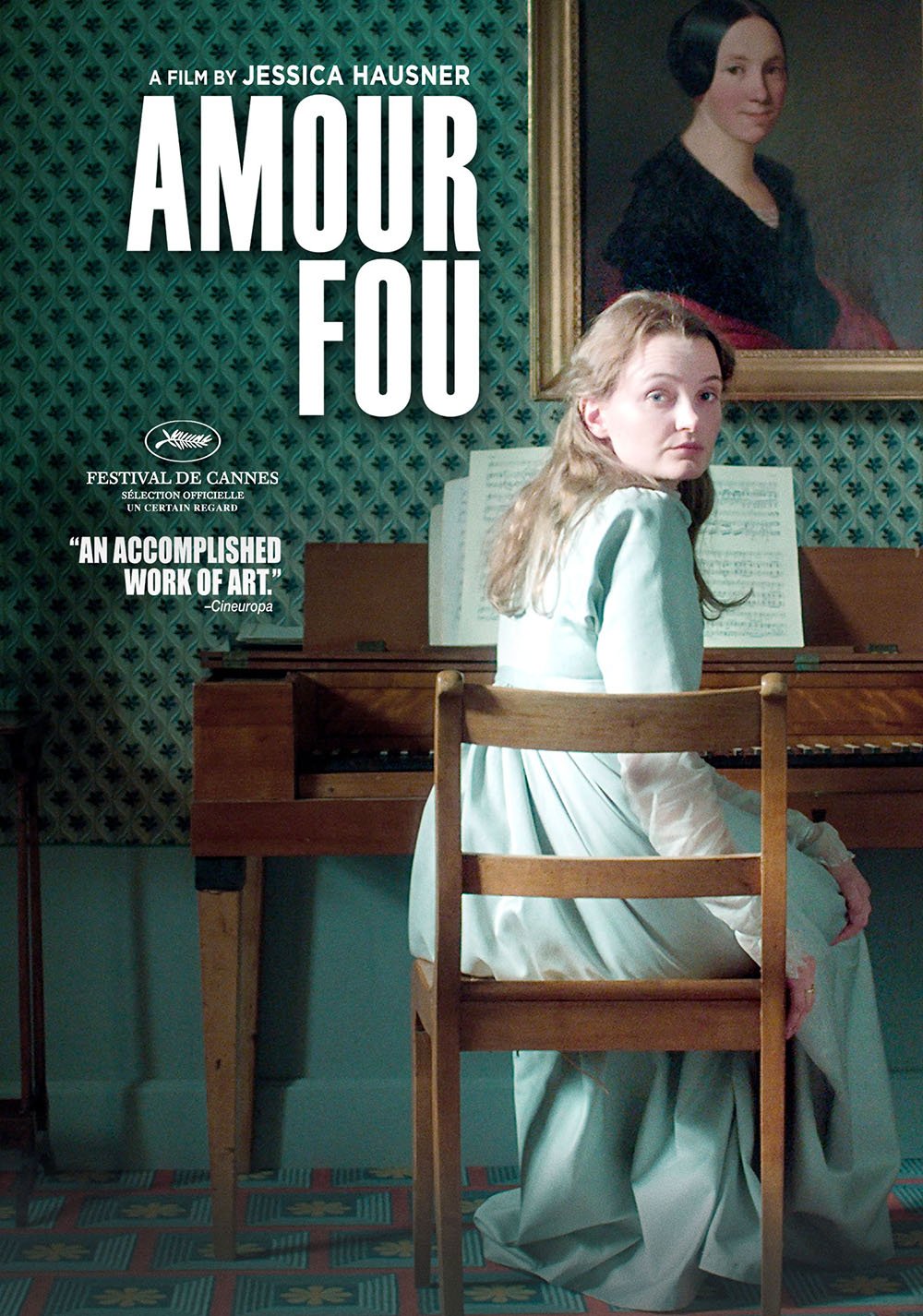 AKA: Mad Love
Genre: Romance/Drama/Tragedy
Year Released: 2014
Distributor: Film Movement
Origin: Austria/Germany/Luxembourg
Running Time: 96 minutes
Rating/Recommended Audience: PG-13
Related Films/Movies: N/A
For Fans Of: The Marquise of O, If You Don’t I Will
Notes: N/A
Fun Facts:
-One of the production companies responsible for this movie is called Amour Fou Luxembourg. Yes, the name of the movie shares the name of one of the production companies that made it.

-A major inspiration for the set design and coloration is the Dutch painter Johannes Vermeer.

-Amour Fou is based on a true story with the poet/author Heinrich von Kleist. In Germany, he has a literary prize and a theater named after him.

So I just watched one of the darkest romance movies out there.
To be brutally honest, I’m not a fan of romance movies. I don’t mind movies with romantic elements in them, but the genre turns me off. There are several movies that aren’t charming at all. There are romantic movies that use what I like to call “fake optimism” with these lovey-dovey cheesy happy endings that make me sick. Don’t even get me started on those supernatural stories, Harlequin dreck, or those godforsaken harem anime shows. No…just no. Then came this little Austrian period piece…

Amour Fou takes place in 1811 Berlin back when the country was addressed as Prussia. There’s this rich woman named Henriette Vogel is having a grand old party full of other people in her social class. Well, most people except for one certain Heinrich von Kleist. He’s a love-stricken author and poet who writes about dark themes such as The Marquise of O (which Henriette likes despite the story having rape as a pivotal moment in the plot). Heinrich does feel compelled to profess his love to Henriette after being rejected by another woman named Marie. There’s a problem though. First-of-all, Mrs. Vogel is already married and has one daughter named Pauline. Second-of-all and the most damning element in this predicament, he wants to make a suicide pact with her since he can’t stand life itself.

Now, do you believe me that this is a dark movie? Because the suicide aspect plays a major motif.

Heinrich is such a melancholic character. Even when he’s severely depressed, he comes across as mildly happy in a contrast to his feelings. It works because he sees death as the main thing he looks forward to more than anything else. He’s very eloquent in his morbidly sad state and he has the right amount of social awkwardness to make that character work in Amour Fou. Heinrich even talks about suicide pacts as if he was making a million-dollar proposal to women, for crying out loud. I do appreciate the actor Christian Fiedel looking just like the person he portrayed. Seriously, the resemblance was uncanny if you saw some pictures of von Kleist. There was a very disturbing aspect to his character that made him much creepier the second time around. It wasn’t the obvious suicidal element, it was the fact that he first professed his love to Marie. After the second viewing, I realized that she was his cousin whom he first gave the suicide pact idea and was heartbroken she wouldn’t accept. Wow, the level of squickiness suddenly got high. I know he focuses on Henriette for a majority of the movie, but I couldn’t shake that off.

Henriette was a decent protagonist despite not having as much personality as Heinrich. She’s a loving mother to Pauline and enjoys her luxurious lifestyle without being overindulgent in it. One thing that I liked about her was her thoughts on her own singing compared to the singer that was hired for the soiree at the beginning of the film. Henriette thinks she’s not that good of a singer while she pities the singer who came to the party because she worries that if that vocalist made a mistake, her reputation would be tarnished. It shows some self-doubt in her which I did appreciate. Once it gets to the part of the film where she gets diagnosed with an illness, her world suddenly changes, and starts seeing where Heinrich is coming from with his philosophy on love.  Yeah, this movie isn’t going to end well.

Taking a break from the plot and characterizations, I must say that the set design is superb. I’m not super familiar with 19th-century Germany, but it looks very accurate. The filmmakers did admit to spending a lot of time to make sure the fashions, culture, and furniture were super accurate to the times. This is some Downton Abbey levels of accuracy right there. The coloration and sets were gorgeous even during the most mundane scenes in Amour Fou. They even got the pianos right by having most of the keys be black and the sharps/flats become white which is the opposite of how pianos have been for decades. Whoever was in charge of the visuals and sets of this film needs more work from other film directors.

One thing I did like was the element of the rich. Around that time in Germany, there was a new tax being implemented where all classes would have to pay their fair share. The reactions to the aristocracy were priceless. They claimed that it was oppressing them and that the underclass should know their place. Amour Fou may have taken place in the 1810s, but those conversations are still going on two centuries later all over the world. Even Henriette’s husband becomes apathetic given his social stature. When she wants to see Heinrich, he doesn’t seem to care about it which shows how awesome of a husband he is (yes, I’m TOTALLY being sarcastic) since he wouldn’t have to lose his comfy position in Berlin even if she were to see another man.

Amour Fou is a dark and complex tale, but it does get stale at times. Sometimes, I feel that Heinrich repeats himself with his morbid sentiments on suicide. I can understand repeating some of the verbiages when going from Marie to Henriette, but I had to say “I get it, Heinrich. You’re a guy that romanticizes death since you think life is too cruel. Shut up already!” Some events while looking great with the cinematography and coloration felt like ornamentation to me. The ending will definitely be controversial even though there’s a twist you won’t see coming in the last ten minutes of the film. The viewer will either be in pure tears or scratch their heads despite the obvious events that transpire  .

This Austrian film was better than I expected despite the low bar I set for it being a romance film. The characterization between Heinrich and Henriette is quite good despite some of the flaws in how they are portrayed. The backgrounds and visuals were certainly eye-catching and quite beautiful. The themes are disturbing, but they certainly are better than most movies in the romance genre. I also enjoyed the usage of music only being played at parties with a pianist or a chamber group. There are no cases of background music laid over the scenes. While Amour Fou has its own issues, I did enjoy this quiet, yet tragic tale.

Cons:
-Can be too quiet in multiple scenes
-The disturbing implications between Heinrich and Marie
-Can be way too dark for some viewers

Content Warning: Teens and up. There are not many objectionable things, but the subject matter is very mature given the storylines. Suicide plays a major role in the plot and characterization although I won’t spoil how it plays on in the final act. The Marquise of O is discussed which is a book that involves a rape scene as a major plot point. There’s implied incest when Heinrich wants his cousin Marie and him to do a suicide pact before he moves onto Henriette which is very uncomfortable once you realize they are related (it’s mentioned in passing).