The Women Who Kill Lions Review 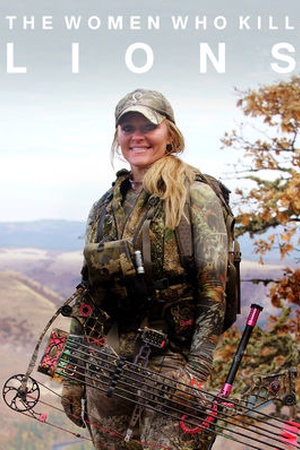 -Director Neil Rawles has also worked on episodes of Locked Up Abroad and See No Evil.

The documentary kick continues as I’ve been discovering some shorter docs to watch. Many of them are ones I’ve never heard of, to be honest with you. Some of the stuff I’ve been putting on my queue has been from the British TV company Channel 4 as they’ve done some made-for-TV documentaries. I was intrigued by the title to see what this was all about.

The Women Who Kill Lions is about the lives of two female hunters. There’s Rebecca Francis, who’s a top game hunter from Wyoming, and Jacine Jadresko, who’s a Croatian-Canadian single mother of one who has enough guns to arm a small infantry. Both of them go all over the world to hunt several different animals across multiple continents. They are into eating some of their kills, taxidermy projects, and they post photos of their hunts on social media. They talk about their home lives and also discuss their strategies as they try to get certain kills. In addition to their lives, they’ve gotten some harsh words from the internet for their hobbies.

The production of this documentary was great. It had a professional movie quality to it. After watching another Channel 4 documentary The Ultimate Guide to Penny Pinching, this was a vast improvement with the visuals. The coloration uses a lot of greens, browns, and tans with some earth tones. They really work with the environment. The visuals make a lot of the locales in Wyoming, Washington State, Croatia, Canada, and somewhere in Africa (I’ll talk about that issue later) look surprisingly idyllic even though there would be some carnage about to happen in the hunting scenes.

I did like how it presented both sides of the hunting argument. Both Rebecca and Jacine make their case of how what their doing is fine and ethical. They both do typical hunting with common animals and they do hunt for food which I don’t have an issue with it. They also argue that hunters are the “true conservationists” when they control the population of certain animals or when they go for more extravagant prey (such as the giraffe scene with Rebecca), they hunt animals who may be sick or could provide meat for the local community. Rebecca and Jacine claim that they love animals despite killing some of them. At the same time, some of the online critiques were legitimate even though they were chock-full of profanity. There were some that questioned their motives, but some went too far. Some of them made death threats to themselves and their families which made both female hunters look oddly sympathetic.

I will admit that the title was misleading. Yes, you do see some scenes and discussions about them killing lions, but I thought more animals got more focus than the lions themselves. I’d even argue that the black-tailed buck that Rebecca goes after in the last third of the documentary got way more focus than any lion did. I did have issues with Jacine’s logic in trying to hunt lions. I will admit that it was ludicrous that she was paying four to five digits to go to the savannas to shoot up a lion. When they get scenes of her looking online, I saw that there was an option to kill a white lion and I will admit, my first thought was “You DO NOT freaking touch Kimba!” In all seriousness, she asks why lions’ lives are worth more than something like a deer’s. I get where she’s coming from by mentioning how those animals are symbols of power and look cool to most people, but where her logic comes to a screeching halt was when she claims that lions aren’t endangered. Jacine, I hate to get all National Geographic here, but that’s not entirely true. Sure, many species would be considered threatened according to IUCN, but there are some endangered breeds out there such as the West African Lion and the Uganda Lion who have very low population numbers. Also, they never mention which parts of Africa the hunters visit to score their kills. I don’t know if it’s for confidentiality purposes should the hunting locales be of dubious legality or the director’s lack of geographic detail of Africa in contrast to mentioning specific places like Wyoming, Washington State, or Croatia, but that should’ve been addressed.

I had some mixed feelings about this issue and not because I’ve never hunted before. If people are hunting to get food in a legal and ethical environment, then I’m fine with that. What I take issue with is some people hunting for sport when they’re going after vulnerable and or/threatened species. I know I’ll get some heat for saying this, but what I thought the women did was excessive and I’d say the same thing if they were men. I did like how they brought up the Cecil controversy when that dentist from Minnesota shot and killed the aforementioned lion while in Africa. He was righteously lambasted for what he did, but I think people went way overboard with the vitriol against Jacine and Rebecca. It’s one thing when celebrities like Ricky Gervais and Miley Cyrus call them out for it, but when people on the internet are making death threats and even rape threats against them, then they have completely lost their argument. I’m not going to defend the people who went way too far, but the women do have to take responsibility whenever they post videos and photos on social media, their websites, et al. Hunting animals like lions, giraffes, grizzly bears, and other wildlife is a controversial thing. When you look for controversy, controversy will find you. They should’ve known the risks of putting themselves out there with their kills.

The plotting of the documentary was a bit strange. You never see Rebecca or Jacine talk to each other, which I was nonplussed about it, but I felt that this documentary was incomplete. There’s this build-up with Jacine trying to prep her son Diesel (really, that’s his name. Insert car joke or Kevin Nash joke here) to go on his first bear hunt, but it gets dropped so fast. The ending was way too rushed and it was still incomplete. SPOILER WARNING: Rebecca stops posting online about her hunting expeditions and the documentary just ends. There’s no follow-up with anything else. I think an extra ten minutes should’ve sufficed.

The Women Who Kill Lions is a controversial documentary and your mileage may vary depending on your thoughts on hunting and conservationism. I did appreciate how both sides of the argument were brought up even though both sides had glaring fallacies in them. The production is quite wonderful, so I couldn’t complain about that. I wished they would’ve renamed the documentary since different types of animals are focused on way more than lions with the exception of the middle of the movie. The documentary wasn’t well-paced and some real-life storylines get abandoned. It was just a slightly above-average doc.

Pros:
-Great visuals and production
-Breaks the stereotype that women can’t hunt
-Presents both sides of the hunting argument

Content Warning: This documentary is for older teens and up. Keep in mind, that there is some hunting action going on and you do see the animals get shot and bleed. The black-tailed buck has blood oozing out of its chest once Rebecca’s hunting party finds it. There’s also a weird fascination with guns with the two of them with Jacine’s army surplus-sized gun closet and with Rebecca fawning over getting hot pink rifles, shotguns, and handguns for her daughters. The biggest objectionable content would be the language where most of it comes from the hate comments. They say some disgusting things with some R-rated dialogue about how these people want to kill the hunters, their families, and also hope that they get violated as punishment for killing the animals.