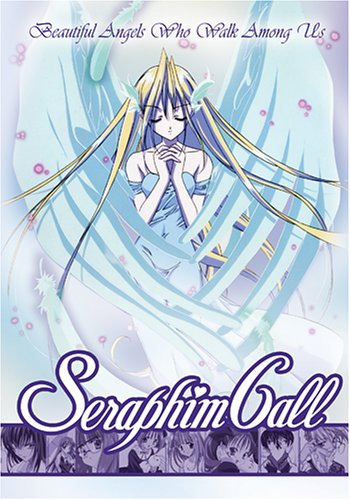 -Hilarious in Hindsight: This wouldn’t be the last time that there would be a character named Shion who also has a twin sister (**cough** When They Cry **cough**). Also, Shion’s voice actress Miki Nagasawa has played a character who shares a name with the other Murasame twin. That would be Sakura Kuriyagawa from Key the Metal Idol which is also her debut role.

-Language pun: Tanpopo’s online screen name is Dandelion. Why is this a pun? Tanpopo literally means Dandelion in Japanese.

Here’s an obscure anime series for you. I remember hearing the name of it years ago, but I never had the chance to see it. Now granted, I’m not a fan of some forms of slice-of-life animes, but I heard that there were some avant-garde and experimental elements, so I was suckered in to watching all dozen episodes.

Was it worth it though?

Seraphim Call is an anime series that deals with the lives of eleven different girls living in Neo-Acropolis. It’s a high-tech artificial island city in the futuristic year of 2010 (hey, this was made in 1999, but I’ll talk more about it later). Each episode highlights each girl with their situation as a tiny vignette in Neo-Acropolis. In the final episode, they all meet each other and it’s revealed that the characters have direct and indirect connections with each other.

When I first heard of the premise and started watching the first couple of episodes, I was instantly reminded of Sentimental Journey for better or worse. Both anime series have a lot of similarities since the two of them of are slice-of-life anthology stories involving female characters, are animated by Sunrise, have twelve episodes each, multiple ending songs performed by that episode’s lead heroine’s VA, and there’s usually some kind of romantic element more often than not. Now, to be fair to Seraphim Call, the last episode does allow the other characters to meet which Sentimental Journey doesn’t do at all. That and Seraphim Call is an original screenplay as opposed to Sentimental Journey being based on a dating sim. The episodes in this anime have a bit of a genre roulette to them. There’s your typical drama or romance thing, but there are stories that have sci-fi elements, two episodes with identical plots but from different perspectives, a one-girl play, an episode is from the perspective of a stuffed animal, and even an episode that parodies both Thunderbirds and Power Rangers: Lightspeed Rescue of all things. There is some creativity with how the stories are presented, but some are better than others.

Let me tell you about some of the highlights in my opinion. My favorite episodes are the ones involving Kasumi Kurenai and Urara Tachibana. Kasumi is this silent and mysterious woman who had a habit of lying down on a fountain and wishing on a 500 yen coin which becomes a huge trend with the girls in Neo-Acropolis. One such girl is Lulu who’s a cub reporter for a news station. She claims to know everything about the legend of Kasumi, but a camerawoman questions her beliefs despite Lulu’s persistence to be exactly like her. Even though there are some predictable things like who the camerawoman really is, the ending is quite intense and there’s a really good message about how people shouldn’t try to be like others. Urara’s episode is presented like the aforementioned one-girl play. She’s on stage monologuing while pretending to talk to other characters as the background turns into different forms of scenery in her life. I thought it was great how her late father was the creator of Neo-Acropolis and her episode gives much needed world-building in that island city. What made this really fascinating is that that Urara is the only character who’s face is seen in that episode and is the only other character besides her father’s spirit who has dialog. There’s a recurring motif of a door standing in the middle of nowhere which I thought was a good metaphor for her closing herself away from the rest of the world as she freaks out when she hears it open or by “sleeping” on the door in a dream sequence. I thought those episodes were good.

There are also some episodes that are just bad and have horrible implications. They involve Hatsumi Kusunoki and the Murasame twins. Hatsumi is a huge tomboy who’s big into sports and hates everything that’s feminine (that and looking like the title character of Suzuka). At high school, she wears boy’s uniforms while the rest of the girls wear sailor skirts. She’s just living her life until this woman named Miyabi stalks her by constantly telling her she’s beautiful, vandalizing the school track by making a message for her, begging her constantly as she desires to have Hatsumi be a model for her art career, and she even gets a job at her high school to be close to her. This made me really uncomfortable seeing this grown woman fawning over a teenage girl. Seriously, Miyabi is loaded with some major protagonist centered morality as she tries to get Hatsumi to be her painting model. She resorts to cheating at swimming to beat the tomboy (it makes sense in context), has her pose in the nude (thankfully, she’s censored), and only uses Hatsumi for her own gain. I’ll come out and say it: Miyabi is a lesbian pedophile. If she were a straight man going after that teenage girl, then someone would’ve called the cops already. The fact that she got hired even though she vandalized the same school’s track is insulting to my intelligence. Now, the Murasame sister episodes had so much more potential. I did find it fascinating how Shion was the cold and calculating sister while Sakura is the naive yet kinder sister. Their episodes have identical dialogue most of the time, but they change the perspectives such as both characters using machines that can simulate other people’s lives. Virtual reality and reality get blurred in that episode and watching Sakura’s episode revealed some things I didn’t pick up on at first. However, everything comes crashing down as both of them not wanting to do with a love letter that may or may not be about either twin, but they resort to kissing each other near the end. Really, Sunrise? First we have an adult woman going gaga over a high school student, and now you’re going to throw in some twin-cest crap with Shion and Sakura? No…just, no.

The rest of the episodes are mainly hit or miss. Most of them are alright, but some I found really boring. Sure, the Ayaka episode with the rescue team subplot was funny, but not overly so. Since Seraphim Call takes place in 2010, it’s funny watching it in 2017 to see what things did or didn’t happen in this decade. There’s video chatting although it’s more advanced than Skype or Facetime though. There’s the usage of robots like Yukina’s Gundam-esque giant robot, robopets including Ayaka’s enormous mechanical chameleon, and some police mechs (Patlabor rip-off!). It’s like there are more futuristic things than what really happened in 2010 and it felt like watching 2001: A Space Odyssey after 2001 or watching Bicentennial Man since the first part of that story takes place in 2005, yet I don’t see any personal androids for sale to this day.

The production wasn’t impressive which is sad because Sunrise was in charge of animating this. I understand that Sunrise has so many sub-divisions, but this isn’t their best. Seraphim Call isn’t a series that needed a high-budget or some ultra-fast action, but there should’ve been more effort. Characters faces aren’t seen in a handful of dialogue scenes such as the last episodes, the action scenes are unimpressive with the robots, and there are b-roll shots that are way too long. Keep in mind, this is the same studio that animated Cowboy Bebop and Outlaw Star only a year prior to this and it came out the same year as Sunrise animated Turn A Gundam which is far superior in the animation department. Just because something doesn’t have that much action doesn’t mean that the animators can just slack off. Case in point: just look at Haibane Renmei, any one of Kyoto Animation’s adaptations of Key’s works (Air, Clannad, and the Kanon remake), or Ghibli’s more realistic movies such as Grave of the Fireflies or Only Yesterday.

Seraphim Call was a let-down. The experimental elements failed more than they succeeded which made this a pretentious watch. While there are some good episodes, there are others that are boring or just insulting. The Hatsumi/Miyabi situation was just horrible writing by justifying a high school faculty member having a relationship with a student and it should offend people who self-identify as LGBT because of the horrible implications of that relationship. The music was boring with the exception of the opening theme “Pray” which is a nice song although not mind-blowing in any way. The production could’ve been better since Sunrise has a better track record, but I felt that they were just phoning it in with this short anime series. If you like anthology-based animes, then stick with Sentimental Journey, Diamond Daydreams, or even Human Crossing.

Pros:
-Kasumi and Urara’s episodes
-“Pray” opening theme
-Some creative framing and plotting in some episodes

Content Warning: The Anime Works release of Seraphim Call gives it a 7+ rating. Some episodes, I’d agree with it, but not for others which is why a 13+ rating might be more appropriate. There’s some mild language occasionally used with Kasumi and with some robbers in Ayaka’s episode. There’s some mild fan service and some covered nudity with a few of the female characters. The biggest thing that more conservative people might object to would be the usage of homosexuality with some of the relationships. While there are some relationships that are at the same-age range, there’s some taboo stuff with Miyabi being an adult fawning over the teenage Hatsumi or with Shion and Sakura kissing each other despite being twin sisters. The sad part is that those particular moments aren’t seen as bad things which will leave a bad taste in your mouth.