Boy and the World Review 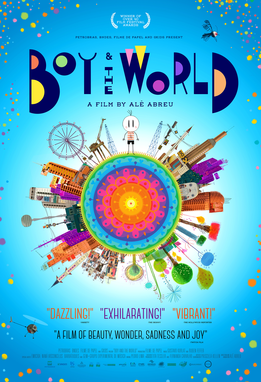 AKA: O Menino e o Mundo
Genre: Adventure/Experimental/Surrealism
Year Released: 2013
Distributor: GKIDS/Universal
Origin: Brazil
Running Time: 80 minutes
Rating/Recommended Audience: PG
Related Films/Series: Menino and the Children of the World (upcoming TV series)
For Fans Of: Boy and the World is a very unique movie, and I can’t think of any other film that matches the feel of it.
Notes: N/A
Fun Facts:
-The dialogue in Boy and the World may sound like gibberish, but in reality, it’s Portuguese dialogue recorded backwards.

-Boy and the World won the Best Animated Feature: Independent Award at the 43rd Annie Awards.

-This film was made with only a half-million dollar budget to animate and produce Boy and the World. This movie looks way more expensive than that despite the crayon and drawing-based forms of animation.

Here comes another Iridium Eye first, everyone. This review is the first one I’ve written that involved a South American animated feature and it’s the first Brazilian film I’ve critiqued since starting this little film review blog. That makes four continents covered with all my animated film reviews with Europe, Asia, North America, and South America.

Boy and the World is an experimental animated film that involves a boy named Cuca. He’s an imaginative character from a rural Brazilian town that often plays in the forests with the various animals. He’s also attached to his parents. However, his dad takes the train to find employment much to the disappointment of Cuca himself. He packs a suitcase containing a picture of his family and is blown away by a huge wind that takes him to this strange universe. Cuca is in this new world where he is taken care of by an old man in this working-class town where the residents are cotton workers. The employees are mistreated by the foremen and Cuca has to find a way to survive.

Leave it to GKIDS to find animated movies with creative forms of animation out there. A majority of Boy and the World uses crayon drawings while mixing it with cut paper assemblages and digital animation. This movie felt like a dream I may have had during my early elementary school years that was somehow brought to life. There’s a vivid usages of pastel colors for most of the movie, some minimalistic spots, and even the usages of chiaroscuro hues during some dystopian elements in the second half of the film. The only other thing I can think of that uses crayon-based animation was Stickin’ Around, and Boy and the World clearly blows that 90s cartoon out of the water in terms of it’s production while simultaneously having more depth, for your big fat information. Yes, I just referenced Stacey, the main character of that aforementioned cartoon’s catchphrase. For the two of you who got that reference before I brought it up, I thank you.

The story of Boy and the World is mostly straightforward despite the abstract visuals and presentation. It’s really a story that starts out as a boy leaving home to find his dad, but it evolves into something more. A child can definitely follow most of the action without even paying attention to the reversed Portuguese dialogue. I do appreciate the lack of pretension in the narrative by not trying to make it more artistic or intelligent than what it is. Even adults could find something to like besides the animation quality. There are some political and social issues that are referenced in Boy and the World that would be more obvious to older viewers including some references to other events for better or worse. I will say that there are some mind-screw moments like the other adult characters. There’s the old man who rescues Cuca and the younger man with the bicycle. Out of context, they could unintentionally look like kidnappers, but it becomes more apparent as to who they really are even though it’s contrived with their identities.

Boy and the World has some admirable qualities, but not everything hit the mark for me. Even though the kaleidoscopic visuals are impressive, they can definitely weird out some viewers or think the creators were on drugs when making it. I disagree with that assertion, but I do admit that the psychedelic crayon animation may not be for everyone. The biggest flaw besides the mind-bending characterization would be the heavy-handed imagery. As the story is easy to follow, it becomes very preachy during the last 30-40 minutes of the film where it becomes too obvious with what it’s about. Once the cotton factory CEOs came in with their huge machines, I knew where this was going. The staff get laid off in such a predictable fashion. There’s even the imagery of these men in riot gear who also pollute the area with marching band instruments (yes, really). The people revolt against them as there is a symbolic fight with a rainbow bird fighting against the army’s black bird. It’s an interesting scene, but the context around it is as subtle as an anvil falling from the sky. It becomes less subtle when the black bird briefly transforms into what looks like a black Nazi eagle as it fires machine guns to kill the rainbow bird which any adult should get. Cheap villain heat, much? The rest of the final act even goes to preachy green aesop territory. I get that deforestation is a big deal in Brazil with the Amazon logging debate and the history with Latin American dictatorships with the death squad imagery, but this was just way too much for a film like this. Then again, environmental messages haven’t been written well in most films I’ve seen.

This Brazilian animated film was worth watching, but it loses itself with it’s overt message. The production of Boy and the World is quite phenomenal with it’s usage of coloration and animation techniques. The soundtrack is sweeping as all the actions are accentuated by whatever note is being played. I wouldn’t mind buying the soundtrack for it’s usage of experimentation and quirkiness. While Boy and the World has some good messages, they are executed in a proselytizing way and the imagery gets very heavy-handed with the obvious metaphors for big business, the environment, and income disparity. Boy and the World is good for all ages to watch, but I can’t give it my fullest recommendation.

Cons:
-Mind screwy moments
-Some plot holes with the dad sub-plot
-Preachy themes with the environment and poverty

Content Warning: This film getting a PG rating is fair. There are some dangerous elements such as Cuca not watching where he’s going while looking at a kaleidoscope while he’s walking on ascending construction equipment and being trapped in a freighter. There’s even a brief scene where Cuca is walking alone at night where he’s passing a nightclub and a bar. The black riot gear police can be scary for the younger viewers, but the full repercussions are more frightening for adults with some of the dictatorship imagery and strongly implied police brutality. In the second half of the movie, there are a group of kids scrounging in the slums while dumpster diving which is very dark.