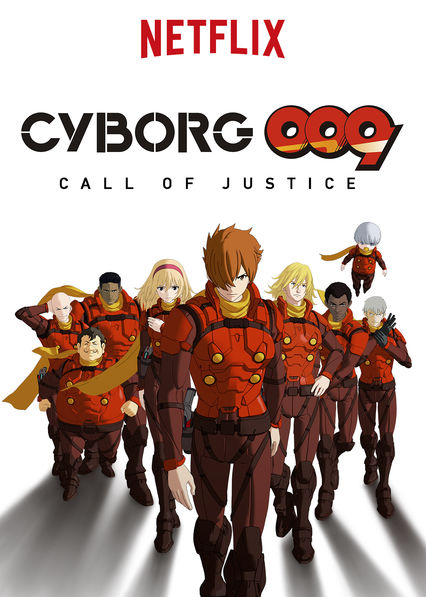 -The review reflects the ONA version as seen on Netflix. The content involves the entirety of the original film trilogy, but broken up into 12 episode segments.

-There’s little to no need to know about the Cyborg 009 universe when watching Call of Justice. Newbies are welcome.

Fun Facts:
-Hilarious in Hindsight: Benjamin Diskin seems to have a habit of playing bald heroes with British accents and number themed aliases. Could one argue that Great Britain/007 is the grown up version of Nigel Uno/Numbuh 1 from Codename: Kids Next Door?

-Christina Valenzuela AKA Cristina Vee returns in another Cyborg 009 anime. She was Miki in Cyborg 009 Vs. Devilman, but she plays 003 in Call of Justice. Patrick Seitz who played 005 in that OVA returns as the lead villain Emperor.

-Episode 11 is called “For Whom’s Sake” which is a reference to the name of the opening theme of the 1979 remake (and 1st remake therein) of Cyborg 009.

-Cyborg 009 started out as a manga from 1964 and ran to 1981. It ran in 5 different magazines including Shonen Jump at one point and Shojo Comic. Yes, it ran for both Shonen and Shojo magazines. Imagine the universal appeal with both male and female audiences.

-Call of Justice was written and co-produced by Kenji Kamiyama. He directed several of the Ghost in the Shell anime projects, Eden of the East, and he did backgrounds for Ducktales before joining Production I. G. Yeah, really.

I wasn’t expecting to be immersed in the Cyborg 009 universe again. After watching Cyborg 009 Vs. Devilman, I decided to check out the most recent incarnation of Joe Shimamura and company with more of their superpowered adventures. The entire series was up for streaming, so I couldn’t complain about it.

Cyborg 009: Call of Justice is a sequel/remake of the 009 franchise. The 00 team is hiding in a small rural Texan town after defeating the Black Ghost organization. Things appear to be peaceful until reporter Lucy Davenport finds the cyborgs’ Lone Star fortress of solitude. She tells them that there’s a group of villains called the Blessed who’ve been wreaking havoc for centuries and one of them killed her father. It’s also revealed that the 00 team hasn’t aged for decades as they’re shown pictures of the Blessed who happen to be in the same areas where the Cyborgs have been fighting (this series takes the previous arcs in the manga and previous anime adaptations in this canon) and they are called back to defend humanity against this superpowered threat. The cyborg team is back in action as they try to uncover the secrets of the Blessed and finding out about a brand new threat that’s willing to force evolution on the human populace.

Unlike my previous experience with Cyborg 009 Vs. Devilman, I really enjoyed how Call of Justice actually (re-)introduces the characters for audiences regardless of their familiarity. We get to know all of their real names, their nationalities, their powers, personalities, and more in such a short time which I found to be refreshing. They don’t just throw the viewer to the wolves and expect them to know everything at once. There are even some new characters to this universe with Lucy, the UN Guardians (Igarashi and Catalina), the Blessed members, and others. I felt way more familiar with the exposition and the world-building which is quite good. They even give some time to develop most of the characters.

The plot starts out very straightforward with introducing the Blessed as the main antagonists right away. I was worried that Call of Justice would devolve into an “enemy of the week” anime series like Dragon Ball Z, Sailor Moon, or Naruto with the first three episodes, but it stops with that trope early on. There are scenes where the characters learn more about the Blessed and even hidden aspects of their cyborg powers while more powerful villains lurk that don’t get stopped in a matter of one episode. They become major threats to the 00 team as it takes the whole team to quell the Blessed. There’s even an element of being fugitives as the UN themselves accuse the Cyborgs of murder and conspiracy despite fighting in self-defense. I will admit that I was bored at first, but it did grow on me as the mysteries become clear and with the stakes getting raised not even halfway through the series. There are even some creative strategies and some of these hidden abilities are quite appealing like what happens to Cyborg 009 when him, Francoise/003, and Geronimo/005 are battling in Minnesota.

I do admit that I wasn’t a fan of the 3D CGI animation style. I do like the updated and more serious character designs like how they made Jet/002’s nose a LOT smaller. I thought the movement was a bit jerky even during some of the fight scenes. There were some jagged elements to fringes of clothing and even some finger tips. If Call of Justice was made a decade ago, this would’ve looked way more impressive, but I’ve seen CGI movies that are much better animated than this. I get that they were trying to re-contextualize anime aesthetics in a cel-shaded 3D environment, but they should’ve added more details to things like hair, outfits, and backgrounds. Some things in the production were off like how empty New York City and Chicago look. Considering that co-animators OLM also worked on Gunsmith Cats over twenty years ago, them skimping out on designing the Windy City was indefensible and it’s not just because I’m a native Illinoisan who’s been to the city several times. They even misspell July when they animated the Statue of Liberty which I found to be laughable. The production was handled not just by OLM, but Production I. G, who I know can do better than this. Say what you will about their older works like Shinesman or Blue Seed, they’ve put way more effort in their CGI and animation production. I would’ve liked this more if Call of Justice was done in a 2D style which I know Production I. G. and OLM are certainly capable of. Also, I think some of the characters resemble other characters and people. For example, 002 looks a bit like Terry Bogard from Fatal Fury and King of Fighters. Some people might confuse Great/007 for Saitama from One Punch Man and the scarf doesn’t help. Pyunma/008 looks a bit like a younger Jules from Pulp Fiction mixed with Donald Glover/Childish Gambino in his design. Now you can’t un-see that if you’ve watched this anime series. You’re welcome.

One big issue I had in Cyborg 009: Call of Justice was the tone. Don’t misconstrue what I mean by that. I do think the more serious nature does work, but I think they overdo the seriousness several times. With the exception of the various quips from Chang/006, the characters act like they’re in a Christopher Nolan film most of the time. I understand that they wanted a more serious nature with how they made the character designs less cartoonish and old-school (I will admit that Ishinomori’s designs have obvious Tezuka influence in them), but they need to lighten up sometimes. At least with media properties such as the Marvel Cinematic Universe or even some of DC’s stuff, they have a good balance with seriousness with humor in it. I don’t mind dark and edgy stuff, but I believe the producers forgot some of the more lighthearted and adventurous nature of previous incarnations of Cyborg 009. No, they don’t need to make Geronimo or Pyunma look like their original manga designs which would be a big sack of no, but I just want the creators to lighten up the story in appropriate parts. However, when it was time to be serious, I did appreciate it like with the introduction of Emperor and his plan to give humanity a forced evolution. He’s a well-placed knight of cerebus with how incredibly powerful he is and his plan for humanity is atypical given his philosophy. I also liked how he doesn’t look like a villain with him being very fit, having a bishonen look, and wears all white. If you saw a picture of him, you wouldn’t think he’d be the lead protagonist until you watched this show. That was a nice touch. I’m also glad how they made him a serious threat against the Cyborgs without resorting him to being a Villain Sue (I’m looking at you, Aizen from Bleach).

Cyborg 009: Call of Justice was an anime that started out a bit mediocre, but it does improve over a short amount of time. At only twelve episodes, it’s not that much of an investment to watch the entire series. Newcomers and old-timers alike can find appreciation with Call of Justice. The CGI animation style could’ve improved greatly, but it does take getting used to despite Production I. G and OLM being better than this. The serious nature is effective although they overdo it several times. The plot is something one can take seriously and I was able to watch the entire series without having it feel like a chore at all. The background music was typical symphonic superhero faire, but the theme songs by Canadian/Japanese band Monkey Majik (not to be confused for that short lived cartoon Monkey Magic) were out-of-place for a show like this. Cyborg 009: Call of Justice isn’t perfect, but it can work as a solid introduction or re-introduction to Shotaro Ishinomori’s works.

Adjustable Point System:
Add 2 points if you’re a Cyborg 009 fan
Add 1 point if you like serious superhero shows or movies
Subtract 3 points if perfect CGI means everything to you.

Pros:
-Accessible to both new and old Cyborg 009 viewers
-The storylines can be taken seriously
-Likable main characters

Cons:
-CGI issues
–Call of Justice can take itself way too seriously
-Lack of detail in real-life cities and locales

Content Warning: This got a TV-14 rating, but it doesn’t really kick in until the 2nd half of the series in my opinion. There’s some language thrown in, but most of it is mild with the exception of one example Igarashi says in the last episode. Some of the fights get bloody and some characters die. One Cyborg on the team who will remain nameless has their limbs severed before dying. What I found the most disturbing was Emperor waxing a variation of genocidal ambitions, fighting Ivan/001 at one point with his powers (Ivan has the body of a baby that hasn’t aged), and erases one character’s memory to the point where they can’t even function as a grown adult which is quite disturbing if you think about it.