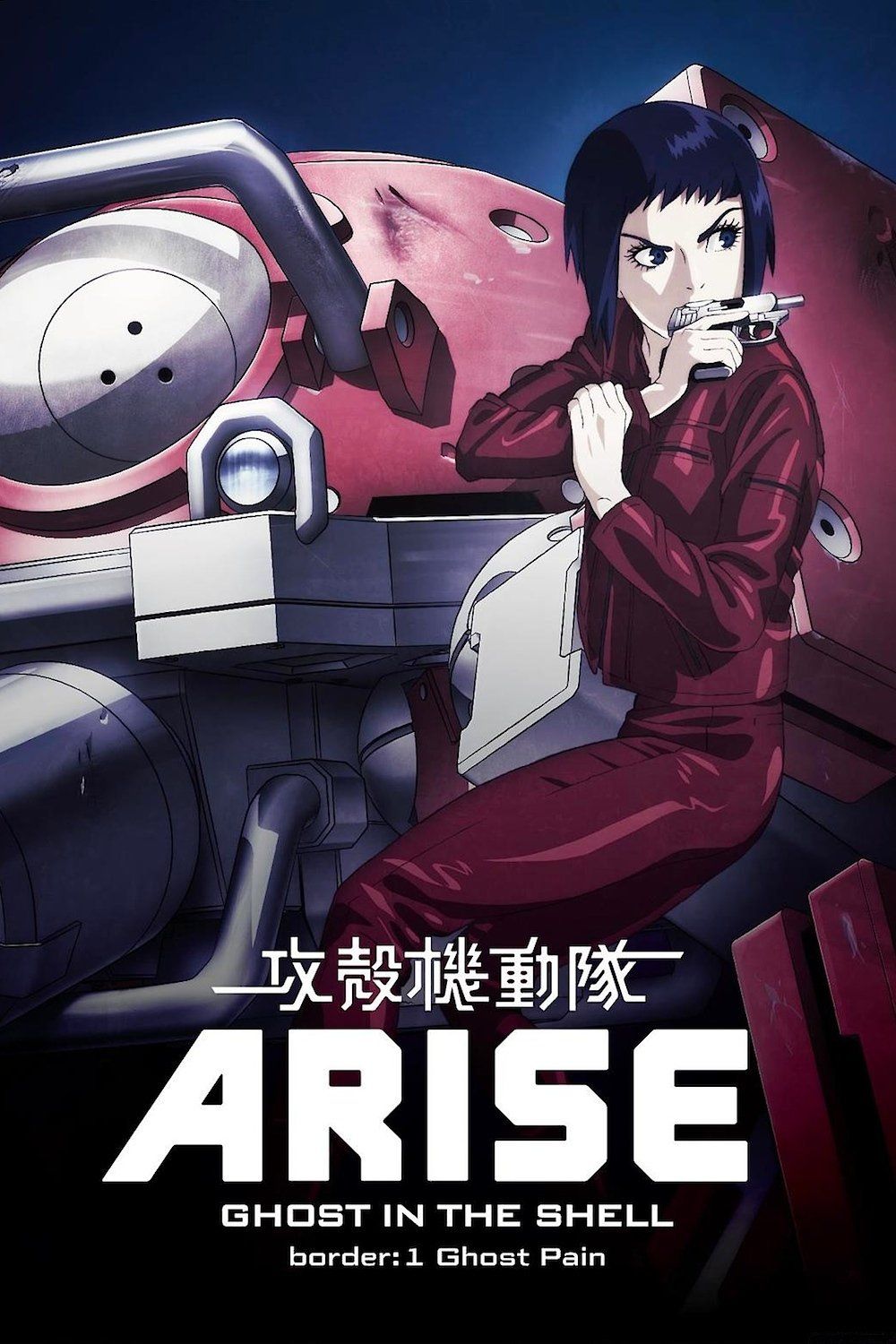 -The Arise films are prequels to the Ghost in the Shell universe and they take place 2 years before the first movie. One can watch Ghost Pain without any knowledge of the other movies or TV series.
Fun Facts:
-Experimental musician Cornelius (real name: Keigo Oyamada) did the soundtrack to the Aries films. Some of you may have heard his music in the game Bit Generations, Scott Pilgrim Vs. The World, and he’s even showed up on an episode of Yo Gabba Gabba of all things.

-Voice Actress Mary Elizabeth McGlynn plays the new character Kurtz in the Arise series, but she’s also played the main character Motoko Kusanagi in the Stand Alone Complex series and Ghost in the Shell 2: Innocence. One can say that any dialogue scene involving Makoto and Kurtz could just be Makoto talking to herself in the English dub if you really think about it.

-Did you know that the Wachowski siblings are heavily influenced by the Ghost in the Shell series? When the siblings were pitching The Matrix to Warner Brothers, they played the original Ghost in the Shell movie on DVD and wanted to make a movie just like that except done in a live-action format. Kudos to them for acknowledging inspiration, unlike certain other Hollywood movies I can name. Elements such as the fight scenes, necks with plug-in jacks, reality manipulation, and other things were straight out of this anime franchise. Also, Trinity was based on Motoko.

Look at that, I’m going to review one of the biggest anime sci-fi franchises out there. I’ve mentioned this series in other reviews, so it would be sooner or later before I would give any of the movies the Iridium Eye treatment. Before anyone says anything, I won’t review the American remake of this series since it doesn’t fit the kind of template for movies I watch and that’s saying nothing about the obvious casting controversy with Black Widow playing Major Kusanagi herself.

Let’s start the review the proper.

Ghost in the Shell: Arise takes place in the fictional futuristic Newport City in Japan in the year 2027. There’s a soldier/arms dealer named Mamoru who was murdered and the Section 9 organization is investigating it. They enlist the help of a soldier named Major Motoko Kusanagi to find out what’s going on. There are a string of murders directly connected to that crime with walking landmines. They need Motoko’s hacking expertise and fighting skills to solve this case. Unfortunately, the Major also gets framed for these murders and her memory gets hacked in her cyborg body, so she has to clear her name.

Since this is Production I. G once again animating the Ghost in the Shell universe, the production is certainly great. The animation is quite fluid and the CGI meshes well with the environment. I’ll even say that the series’ trademark optical camouflage effect used here was way more impressive than previous iterations of Ghost in the Shell. The fight scenes are stunning and there are some creative usages of weaponry and cybernetic technology. I did have to get used to the character redesigns in Arise, especially Motoko’s. She does look younger which I understand because this takes place a few years before the original movie and Stand Alone Complex, but I slowly got used to her new look and her lighter shade of blue hair. While Production I G. has done better visual production in other works, it’s still better than what most animation studios worldwide can do.

Most of the characters from the original movie and TV series return, so there was some familiarity with seeing all of them again, but it was surprising with some of their interactions in Arise. Motoko is in the military at this point in her career as people who’ve seen the older incarnations would surmise given her title of “Major” throughout the series. I will say that, unlike the original movie, Motoko has way more personality in Arise which is a plus. Yes, I know she’s a serious character to begin with, but I liked how she can be rebellious and a bit snarky at times even to her superiors. She even gets called out on some of her actions being selfish which she does learn from. I thought it was great seeing this main character grow and see how she was compared to the original film. It was even more surprising with her and Batou hating each other in Ghost Pain. These characters have always worked together and would take bullets for each other, so seeing Batou try to shoot Motoko and consider her a criminal was a shock to me when that fight scene happened. There’s also the new character Kurtz, who is one of the main character’s superiors in the army. She has the right amount of a cold-hearted nature to her character as she orders Motoko around while calmly threatening her while sounding so professional. You can feel that Kurtz is a woman with dirty little secrets which becomes more apparent with her interactions with the military and how she inserts herself into the case without the Major’s knowledge. Another highlight was the Logicoma machine. For all of you fans of Stand Alone Complex, yes, this is the prototype of the Tachicoma robots from that TV series. The Logicoma brings enough levity in an otherwise serious movie to make me laugh a bit while she helps Motoko with the case. Her cheery personality and naivete were fun, but the robot is still effective in her programming to use the optical camouflage and to get information.

While Ghost Pain was an enjoyable entry into the Ghost in the Shell paracosm, I felt like there were moments where they were treading water. It was a nice re-entry into Newport City, but I felt that several of the elements were repeated. The big one for me was the concept of reality and memory manipulation. I know it’s been a huge motif in the first movie with the concept of questioning reality (The Matrix has taken several cues from that film although adding some things like the pills), but it got overboard with the Motoko character. It was interesting how it plays out with people missing in some of her pictures or her room being a lot messier than what it really was in her eyes, but they make it a bigger deal just to add more to the mystery aspect. Granted, it was great learning about her backstory with elements I never would’ve guessed despite some things I would’ve figured since it was made explicit that she’s a cyborg, but memory manipulation can be a bit of a cop-out. I also felt a bit uncomfortable with her military status given her cyborg body. Motoko is constantly addressed as a test subject by the brass, but what really caught my eye was the notion that the military told her that she can’t do whatever she wants because her body belonged to the government. That creeped me out and it came across as sexist to me. No, just because Kurtz is a female, doesn’t mean it softens the blow. When was the last time you’ve seen a male cyborg or experimental lifeform character being told that the government owns them? I can’t think of any, so it highlights a double standard. I know Motoko Kusanagi is a strong woman, but I couldn’t shake off that little comment.

The music was good, but there were flaws. Cornelius’s background music was serviceable with some industrial and some experimental ambient tracks throughout the film. I wasn’t a fan of the opening and closing theme songs. The opening theme was this bizarre piece which only uses the title as the lyrics. The ending theme was this mediocre glitch pop piece that wouldn’t even hold a candle to a band like Efterklang. I wished that Kenji Kawai would return to score something in the Ghost in the Shell series, but Cornelius did a fine job with the background music.

Ghost in the Shell: Arise -Ghost Pain- was a fine prequel to the rest of the anime franchise. The animation is certainly high-caliber and they certainly put the effort into the visuals. The plot was serviceable with some good surprises and character development even though some elements were retreads from the original film. The music was good but not as good as Kenji Kawai’s work with the previous films. I did have some issues with Motoko being treated by the military as I found it more disturbing than how it was presented even though they had dubious motives. I do want to check out more of the Arise prequels to see more adventures from the Major and company.

Adjustable Point System:
Add 1 point if you’re a Ghost in the Shell fan
Add 2 points if you like sci-fi and/or cyberpunk media
Subtract 2 points if you want something more action-oriented

Cons:
-Over-reliance on memory manipulation as a plot device
-Sexist implications with Motoko’s involvement with the government
-Mediocre theme songs

Content Warning: Older teens and up like most of the GITS universe. The violence is quite intense and Motoko even loses a couple of limbs during the final fight scene. There’s some swearing and dialogue going on. The nudity elements are briefly there early on in the film, but they are toned down so much compared to the original movie. The storyline itself is quite mature so younger viewers wouldn’t get it.