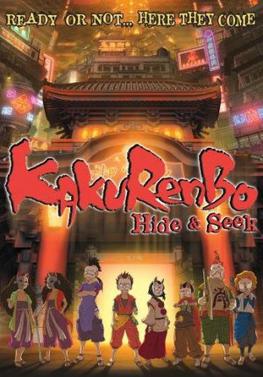 -This is the debut animated work of director Shuhei Morita who wrote, directed, animated, and produced this short anime film. He would eventually direct Tokyo Ghoul almost a decade later.

-Doesn’t Hikora’s Japanese voice sound familiar? His seiyuu is none other than Junko Takeuchi who is most famous for being the voice of Naruto Uzumaki himself. Both characters have a fox motif with Hikora and others wearing a fox mask and that’s not even getting into the final part that involves a kyubi (nine-taled fox spirit). I won’t spoil what happens, but that Japanese mythological creature does add a similarity for anyone who knows anything about Naruto.

Yet another short anime film was viewed by me. I remember hearing about this piece years ago, but I never had the chance to watch it until recently. Part of me was surprised since I would’ve never guessed that the creator would go on to do more famous things long after the fact with Tokyo Ghoul which I haven’t seen, but I heard it’s popular with the anime fans cooler than me. The other part of that surprise involved me back then being really into OVAs and shorter projects, so I could complete various series faster.

Hey, it’s October and I might as well review something creepy for the Halloween season. [insert evil laugh and lightning here].

Kakurenbo takes place in an abandoned near-subterranean part of Tokyo. There are seven kids who decide to play a variation of hide and seek called Otokoyo where they play in a dark section of the city that’s rumored to have demons. Said demonic creatures have taken away children. They have to wear fox masks in order to play presumably to fit in this parapsychological setting. One child named Hikora lost his sister Sorincha in the previous game where she played with other groups of kids, so he’s on a mission to find her. Him and the other children see a girl with a fox mask who looks like Sorincha, but other things happen like these demons terrorizing those who are playing the game.

I knew next to nothing before watching Kakurenbo, but watching it certainly was a creepy experience. The various oni and other Japanese demons look very creepy with their glowing eyes and fangs. They had this mechanical vibe about them as opposed to something more ghostly which I thought was an interesting twist to mythological monsters. The dark lighting does add to the frightening atmosphere, but it only gets more disturbing later on in a major plot twist with how the city operates. The fact that a vast majority of the cast consists of children makes this very unsettling especially with the final five minutes as everyone’s fate becomes sealed. Even the music is chilling with tons of minor key Japanese instrumentation and with the occasional chopped and screwed “ghost chorus” that sings wordless creepy things.

The characters were a mixed bag, but I thought there were too many in this short time frame. Seven protagonists is a lot to cram in twenty-five minutes. A good portion of them were going to be early victims as predicted, there were twins who are completely silent, and only a couple of them have an actual personality. Hikora is the de facto main character since he has a legit reason to play Otokoyo to rescue his sister. He has a protective instinct and is brave despite the paranormal chaos around him, so he has that going for him. There’s Noshiga AKA boss, who’s the leader of a delinquent gang who claims to not be afraid of ghosts, yet he chickens out when there are real demons around him. Noshiga is the biggest of the kids playing the game, but he’s the biggest coward despite being physically stronger than all of them. The rest of them were just fodder. Sure, there’s Yaimao who’s the best friend of Hikora, but he has no other personality other than to fill him in on some of the spirits.

I wasn’t impressed with the animation despite Kakurenbo getting the atmosphere right for this little horror flick. It uses a cel-shaded 3D CGI style of animation that really shows it’s age. I may have had issues with Cyborg 009: Call of Justice with some iffy CGI, but it was nowhere near as stiff and choppy as Kakurenbo. The characters looked like a computer lagging whenever they ran. Some parts didn’t mesh like some of the action scenes or little details such as the kanji symbol on Noshiga’s stomach whenever he moved. While the monsters were certainly creepy, their movements were a bit jerky as they reminded me of those Shangri-La machines from Noein in their bizarre looks, but also in their aged animation. The backgrounds were the best animated thing. The tower was certainly frightening once it’s revealed what’s inside it. Kakurenbo should’ve been better animated. I mean, Voices of a Distant Star was roughly the same length and came out three years prior with less of a production team compared to this, yet I felt that Makoto Shinkai’s debut work was better animated despite some aged CGI in it. I know Kakurenbo would’ve looked more impressive back in the mid 00s, but watching it in 2017 only reveals more visual flaws.

Kakurenbo is certainly good for a short scare, but I can’t give it my fullest recommendation. Hikora is certainly a character to get behind with his simple, yet effective goal which was good, but the other characters are shallow. The animation hasn’t aged well which does dampen some of the scariness despite nailing the mood, coloration, and lighting. The music is certainly haunting though. I would’ve liked to have seen more development with other characters and the world itself. Kakurenbo is only slightly above average as an anime.

Adjustable Point System:
Add 1 point if you like horror movies
Subtract 2 points if animation quality means everything to you

Cons:
-Too many characters
-Aged animation quality
-Some elements are more disturbing than intended

Content Warning: While there isn’t any swearing, sexual content, or blood, I wouldn’t recommend it to anyone under the age of sixteen. The monsters are certainly scary looking which is the least of my concerns here. The characters are children and they get attacked by various demons. There’s a metaphor of human sacrifice which is shown with (spoilers minimized, but apparent) the previous players fueling the city and in the ending, there’s a close-up scene of a corpse of one of the current players which is frightening in itself. The themes are very mature here.