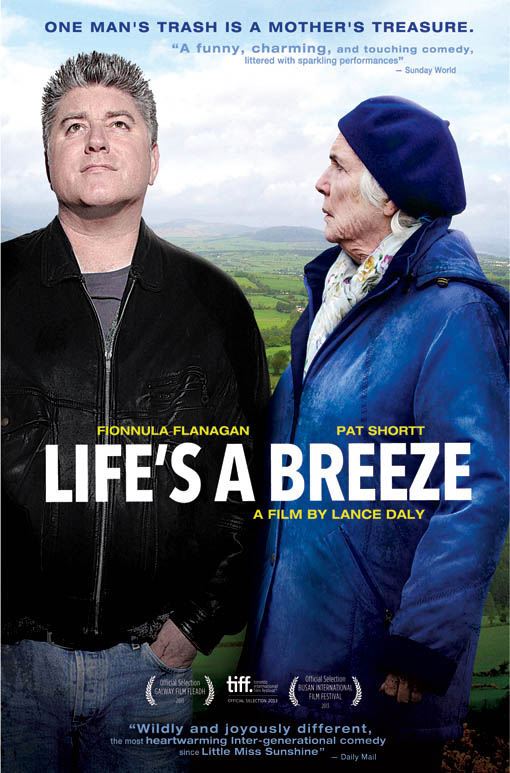 AKA: N/A
Genre: Comedy/Family Drama
Year Released: 2013
Distributor: Magnolia Pictures
Origin: Ireland
Running Time: 88 minutes
Rating/Recommended Audience: R
Related Films/Series: N/A
For Fans Of: Man About Dog, Glassland, A Film With Me In It, Rat Race, He Died With A Falafel In His Hand
Notes: N/A
Fun Facts:
-This was the film debut of Irish actress Kelly Thornton. She would eventually be in the musical Sing Street.

-Hilarious in Hindsight: Hey there, fans of Song of the Sea! Two actors from that movie are in Life’s a Breeze. There’s Pat Shortt who voiced both Ferry Dan and The Great Seanachai while Fionnula Flanagan voiced both the grandmother and the villain Macha. This time, they are playing a son and his elderly mother respectively. Mrs. Flanagan played grandmothers in both movies and there’s even a brief scene involving trick-or-treaters on Halloween where they don’t want to get involved.

-The country of Sweden was misspelled as “Sewden” in the end credits. They filmed some parts of the movie in that country.

I seem to have been gravitating towards Irish films more often as I look for more movies to watch and review. That country has a cinema scene that was bigger than I thought.

Life’s a Breeze is about Nan, who’s an elderly woman who’s been cranky with various things in her messy house. Her adult children have a plot to clean up her house by getting rid of any useless things while also redecorating her house. They pull this off when they bribe Emma to take her grandmother Nan outside the house which she only does due to the money despite the family at large being cash-strapped. When they return from this day out, they find the house all cleaned up and modernized with Nan’s middle-aged offspring grinning non-stop. They give her new home decor, redesigned various rooms, and got rid of over decades of collected junk. This doesn’t bother Nan that much until she finds out that her mattress is missing. The reason why is because she claims to have stuffed a million euros in the mattress. The rest of the family doesn’t believe her at first until they start trying to figure out where this mattress could be. This search becomes so big, that word gets out that this million euro mattress exists which gets national media coverage leading to an enormous treasure hunt all over Ireland itself.

The concept of this film was funny and it was fun seeing this family going all out just for a cash-loaded piece of bedding. I thought it was hilarious how the situation escalates by hearing people talking about it on the radio, having the story reported on RTE (Ireland’s equivalent of the BBC), and seeing rows upon rows of cars around dumps where people are vying to get a million euros. The family get national mainstream attention which affects their daily lives as Emma doesn’t get bullied or unnoticed at school and where Nan even gets interviewed on live TV about this old mattress loaded with all the money from her teacher’s pension, rented money from tenants, and whatever money that wasn’t used to fund her late husband’s trips to the tavern.

I had a few laughs watching Life’s a Breeze. I did have to get used to watching an Irish comedy since their sense of humor isn’t as overblown as over here although it’s not as dry as their neighbors in England are. I did catch the jokes and there was some funny dialog which I enjoyed.   The characters did make this movie click. Nan is this no-nonsense and cynical woman who comes to terms with her old age. I liked how they also made her situation sympathetic while also giving her some flaws like being too serious most of the time (although she does have a deadpan sense of humor), maybe starting to lose her mind, and her issues with her son Colm (rhymes with Gollum) who still lives with her and is on welfare. Emma starts out as this typical rebellious teenage girl, but she does have some legitimate concerns with her family’s lack of money as she has a school lunch that only consists of a banana and a couple of slices of bread. She slowly develops into less of a brat throughout the movie and slowly starts appreciating Nan when they go on trips together when they try to find the mattress. There’s also Colm who’s the aforementioned son. Unlike his brother Michael who’s married with children, he is on the dole, single, and has no kids. He is ever the opportunist as he tries to retrieve the million euro mattress back, and he often masks his selfish desires. While he can be a jerk and has a deadbeat situation, he does develop as a character and there were some parts of him that were unintentionally sympathetic than what the filmmakers showed. the big one being the contempt from his own mom. Nan tells Colm that “You have your dad’s brains. That’s the best I can say about you.” She constantly makes little quips about him even though he’s not making fun of her. The chemistry of the immediate and extended family was fun even though most of the focus is on Nan, Emma, and Colm.

Life’s a Breeze’s score involves some quirky, yet accessible scoring. The soundtrack was quite folky with lots of acoustic instruments and in major keys. I noticed that the banjo was featured prominently without making it sound like country or bluegrass songs. Some Celtic elements do show up such as tin whistles later on. While the scoring didn’t floor me as much as other Irish movies such as Song of the Sea or The Secret of Kells, it’s still quite fun and works within the mood of the film.

While the acting and comedy works in Life’s a Breeze, I can’t say everything fit into place for this film. They never reveal all of the reasons for the financial situations of the various family members. Sure, the viewer does see Colm go to the welfare office twice in the film, but you never find out why. Was he just that lazy to begin with? I doubt an adult his age would be that listless or unambitious. I also thought that Nan doesn’t get called out on her flaws as much as she should have. After the scene where someone finds a similar-looking mattress that only has 670 euros inside, Colm wonders if maybe she made a mistake by counting all that money with some potential memory or senility issues. She gets furious at him, but without going into spoiler territory, Colm ends up being right at the end although not the way he expected once you see how the ending plays out despite being a feel-good moment. Also, the lottery ticket prank although it was well-planned made Colm look more sympathetic in hindsight. Sure, he was inconsistent about not wanting Nan to split the winnings, but the reaction after the fact where he calls out everyone in his family while saying that the earnings could get him a car, a better life, and to move out of Nan’s house showed that he’s not as lazy as he comes across. I also had an issue with a part in the final act where Emma is out all night. She’s only thirteen years old being out that late. Shouldn’t someone call the cops to make sure she’s not missing? That was a gaping plot hole. I know she comes back later that night as part of the big ending scene, but I found that to be a huge gap in logic.

Life’s a Breeze was a fine comedy movie to check out. The comedic timing was fun. The whole goose chase of finding the mattress with the whole Republic of Ireland going nuts over getting a million euros was funnier than it should be without going over-the-top. The cinematography worked well and the lighting was handled just fine. I did have issues with some of the plot holes and some logic gaps despite the great acting and chemistry between the different characters. While it’s not the best comedy out there, you can do much worse than watching Life’s a Breeze.

Cons:
-Some protagonist centered morality
-Noticeable plot holes
-Lack of backstory or explanation for some characters

Content Warning: This is a soft R, but still for older audiences nonetheless. The biggest objectionable factor would be the language used including certain words that sound completely different with Irish accents. Emma does flip off her uncle Colm in one scene as Nan drives her away. During Nan’s 80th birthday, the family hires a male stripper in firefighting gear and gets down to just his underwear and dancing erotically in front of her as part of the celebration.