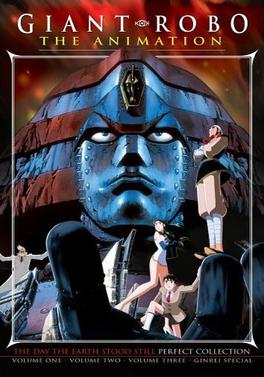 -Both the Japanese and English dubs were taken under consideration, but the English dub is the Anime Works one with NYAV Post.

-Although the storyline is different from the manga or the original 60s tokusatsu production, this is technically in media res as it deals with the final showdown between the Experts of Justice and Big Fire.

-WARNING: Some Spoilers are mentioned in this review.
Fun Facts:
-Creator Mitsuteru Yokoyama is credited for inventing the giant robot archetype in anime and tokusatsu with Tetsujin no. 28 or better known in the English-speaking world as Gigantor. He’s also responsible for inventing the magical girl archetype/genre with Sally the Witch who even shows up as an alternate mirror universe version of this character.

-Several characters in Giant Robo are analogs and alternative versions of Yokoyama’s oeuvre of works, so this was a bit of a crossover but with Giant Robo as a catalyst.

-Cast Against Type: The lead villain Genya in the Anime Works dub is played by Dan Green of all people. That’s right. The same person who almost always plays heroes such as Yugi Muto from Yu-Gi-Oh! and Knuckles the Echidna from Sonic X is playing a bad guy for once.

Looks like I get to review another work from an anime/manga legend. Mitsuteru Yokoyama has been credited for several different archetypes in various genres in the anime medium. Even though he was clearly inspired by Osamu Tezuka, he certainly had his own style and contributed much to Japanese animation. My first exposure was watching some Gigantor reruns during Giant Robot Week back on Cartoon Network’s original Toonami incarnation way back when. I first heard about Giant Robo by playing the Japanese strategy RPG game Super Robot Wars Alpha which featured that robot in addition to several Gundam robots, Evangelion, Mazinger Z, Getter Robo, and many more mecha series.

How does this adaptation hold up after the original story was written thirty years prior to this OVA?

Giant Robo takes place in an alternate retro-futuristic environment where the world is dependent on a fuel source called the Shizuma Drive that replaces fossil fuels and nuclear energy. This energy source is cleaner, more efficient, and more renewable, yet the entire world becomes quite overdependent on it. There’s a malevolent group called Big Fire that wants to destroy humanity. Fortunately, there’s the heroic International Police Organization and their top agents known as the Experts of Justice ready to fight Big Fire. One of the newest recruits is the orphaned Daisaku Kusama and his mechanical nuclear weapon known as Giant Robo that’s controlled by his watch.

My jaw dropped by the animation with how well it’s aged. This is pure hand-drawn 90s animation at its finest. All the fight scenes look smooth and there was so much effort put into the movements of the different characters. The animators gave Giant Robo a huge epic feel and it shows throughout every second. I also liked the amalgamation of mecha, kung fu movies, and superhero influences sprinkled throughout. There are anime series that came out a decade later that don’t even look this good. One thing that was surprising from a historical perspective is that the character designs retain their old-school look to them in a time period that would have frowned upon it. Hats off to Mu Animation Studio for making this near-operatic and melodramatic mecha OVA series.

The characters can be over-the-top, but they certainly work here. Daisaku is the tragic protagonist after he loses his parents. His being twelve years old while being raised by the Experts of Justice of all people provides him some protection, but also uncertainty in how he can be a proper hero. Daisaku may doubt himself, but he’s quite brave and is able to control Giant Robo to take on the various villains from Big Fire. He’s certainly a better protagonist than Shinji Ikari, that’s for sure. There’s Gin Rei who acts as a big sister figure to Daisaku. Don’t let her good looks fool you, she’s capable of kicking butt like the rest of the Experts of Justice, and she even has some supernatural abilities including teleportation. One standout character was the main villain Genya. He could’ve been some typical suave evil genius, but he has way more depth than that. Genya has a very sympathetic backstory which is revealed through flashbacks and crazy plot twists. It doesn’t excuse his destructive nature, but he really didn’t have to be the man he’d end up being. Both voice actors did a great job of portraying this villain, but I have to give props to Dan Green for playing a character outside of his comfort zone. I may give him crap for being in a ton of 4KIDS anime and cartoons, but as I’ve learned with Jungle Emperor Leo where he played the adult version of Leo/Kimba, he can actually be really good when he’s trying.

The music in Giant Robo is just beautiful. If you like orchestral scores, then you should seriously check this out. There are classical leitmotifs used as they parallel various scenes like the famous Tragedy of Bashtarle which looks and sounds amazing despite the horrific events that occur in this important event. The lead composer is Masamichi Amano who also scored Battle Royale and Django Unchained, so you know it’s going to feel epic. They even made seven soundtracks in Japan based on the compositions which show how vast and amazing it is.

While Giant Robo certainly is an epic-looking anime, I do have some issues with it. I understand they couldn’t get the entire saga animated, but I wanted to see more after the last episode since it was clearly sequel bait. Also, you never get to see Big Fire (the leader who shares the name of his organization) at all despite some of his subordinates hyping him up. That was a major letdown. I also thought the parallels of good and evil were too heavy-handed despite the intentional old-school superhero and tokusatsu influences. I mean, the lead heroes are called the Experts of Justice, so subtlety flies out the window in that sense. Conversely, most of the Big Fire foot soldiers wear KKK-style robes while doing the Nazi salute while saying “Hail Big Fire! Allegiance or death!”. Come on, even Hydra and Zeon were more subtle than that and the former is literally a Nazi off-shoot organization in the Marvel Universe. I did get creeped out by the friendship between Gin Rei and Daisaku. I get that they are doing a sibling-like relationship, but some of Gin Rei’s interactions with Daisaku went beyond that as he kisses him once. Keep in mind that she’s an adult and Daisaku is only twelve years old. There’s also a sexist implication with Yoshi and Gin Rei. Yoshi is this tall female powerhouse, so I knew she was going to suffer from “Vasquez Dies First Syndrome” and there’s even Gin Rei’s fate. Realizing that they were the only two female protagonists, it gets uncomfortable.

Giant Robo isn’t the best OVA series ever as some hardcore otaku proclaim, but it’s certainly not a bad watch. The animation is wonderful and has aged gracefully even watching it in this day and age. There are some really good plot twists and a real sense of danger as both heroes and villains win and lose some battles in this worldwide battle. The sound design and music are exquisite with these epic sounds that would put John Williams or Hans Zimmer to shame. Not everything is star-spangled awesome with some of the plot holes and implications with some of the characters which did hamper this otherwise epic mecha series. Giant Robo is a good re-contextualized old-school mecha series with some legit depth, but I do admit that this OVA is overrated though.

Cons:
-Plot holes and an incomplete story at large
-Over-the-top good/evil dynamics
-The unfortunate subtext with the Gin Rei/Daisaku friendship

Content Warning: Teens and up for Giant Robo. Millions of people die throughout the entire series as the fights go worldwide while the Shizuma Drive can be weaponized or faulty. There is some blood during the melee fights. There’s some swearing, but it’s not that big of a deal. I did find umbrage with Gin Rei’s relationship with Daisaku since there’s no way anyone would get away with these implications if this was a man acting the way she does around a twelve-year-old girl. See my issues with The Garden of Words and Somers Town to see where I’m coming from.