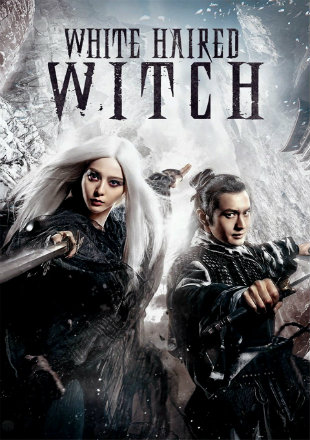 -White Haired Witch is based on a Chinese fantasy novel that was serialized from 1957 to 1968.

It’s been a while since I’ve reviewed some Chinese cinema. Truth be told, I tend to be more of a fan of Japanese cinema, but I wanted to expand my horizons with this movie scene from the most populated country on earth. Sure, I’ve reviewed Mulan: Rise of a Warrior and the documentary Please Vote For Me, but I wanted to delve into the famous wuxia genre that this country has been known for over the past few decades with the most recent film from Jacob Cheung.

White Haired Witch takes place in China in the year 1620. There’s a warrior named Zhuo Yihang who participates in a fighting challenge that allows him to become the successor to the kingdom of Wudang. He’s reluctant at first, but he later accepts his position. His first mission seems like a basic one as he’s sent to give some red pills (no, not the kind from The Matrix) to the emperor. To Yihang’s surprise, they poison him and he is framed for murder. He takes refuge in this hidden lower-class town called Fort Luna where he meets a mysterious woman who’s known as Jade Rakshasa who fights him. Yihang promises to give her a new name the next time they meet again and it ends up being Lian Nishang which means Silk Fairy in Mandarin. They slowly begin to like each other, but Fort Luna is under attack by the imperial army.

This film certainly had a lofty budget when it came to filming White Haired Witch. The scenery is certainly vast and the production is quite glossy like several big-budgeted Hollywood films. The action scenes were certainly overdramatic despite being unrealistic, but that’s wuxia for you. At least the action sequences weren’t boring. I do believe the production was quite gaudy despite most of the movie technically looking good. There’s a couple of spotty CGI in between like the ying-yang goldfish during the opening credits, but those moments were quite few.

The characters were quite many in this film. I thought there were too many throughout the course of the film. Let’s focus on the main ones that matter. Zhuo Yihang is a typical wuxia hero by being honorable and a great fighter. I did like his self-awareness of his shortcomings at the beginning of the film, but I felt that didn’t go anywhere. Jade/Nishang, the titular White Haired Witch started out very interesting as she’s able to take on a bunch of soldiers with the rest of Fort Luna. She’s a tough fighter who has severe trust issues when it comes to men. Nishang has some magical abilities, but she’s cursed with having white hair sometimes and becomes weaker when she’s in this state. I liked how they made her competent, but she becomes so over-dependent on Yihang in the second half of the film. It’s like the director didn’t want to go all the way by making her a strong female character, and I’m not talking about that misnomer when male directors want to give masculine qualities to heroines or worse…making them Mary Sues. Jin Duyi was a serviceable villain. While he didn’t have that much personality, he was certainly very powerful and is able to beat up the heroes cleanly which made him a legitimate threat to Yihang and Nishang.

While White Haired Witch had some nice action sequences, I found this film to be very flawed. The storytelling was all over the place with characters popping up left and right. I found it really hard to keep track of most of them even with the random texts saying the characters’ names. I also thought the film was way too cheesy especially when it came to the romance between Yihang and Nishang. Even the music was so overdramatic and shmaltzy enough to make Diane Warren cringe. One major issue I had was the plot point where Nishang’s white-haired status makes her severely ill. Yihang gets this medicine for her unconscious body and the way he delivers it is through a “true love’s kiss” moment which I just facepalmed. If you don’t know why that’s problematic and horribly outdated as a trope or cliche, let me tell you why. It’s one thing if you’re kissing your loved ones goodnight or your own kids before they go to sleep, but if you kiss someone while they are asleep or comatose, then that’s sexual assault since sleep or unconsciousness negates consent. I didn’t come to watch a PG-13 Chinese version of Sleeping Beauty, so this was just facepalm-worthy.

White Haired Witch may look like a pretty movie with some good action scenes, but it’s all style with little to no substance. The acting was alright, but the screenplay and dialog were way cheesy and even childish at times. The high production values don’t mask the problems in the story at large. While I haven’t read the original story or have seen the previous films or TV incarnations of this Chinese fantasy story, I thought it might do the original tale injustice as I heard that it’s a beloved story for those into Asian literature. If you want to see something like this, then I’d recommend Mulan: Rise of a Warrior over this. Sure, it had cheesy moments, but there was more depth and the story made more sense than this one. Just pass up White Haired Witch.

Cons:
-Too many characters
-Problematic and cliched storytelling
-Overly schmaltzy

Content Warning: Teens and up. The fight scenes can get a bit bloody and Nishang has a tendency to slit people’s throats during some intense action scenes. There’s some swearing and one tastefully handled sex scene. Nothing too offensive, but there are better movies out there.