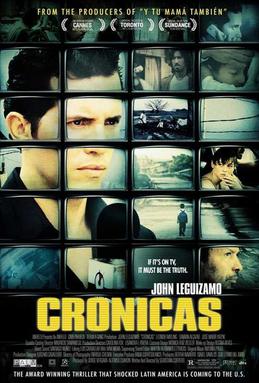 AKA: Chronicles
Genre: Drama/Thriller
Year Released: 2005
Distributor: Palm Pictures
Origin: Ecuador/Mexico
Running Time: 98 minutes
Rating/Recommended Audience: R
Related Films/Series: N/A
For Fans Of: The Usual Suspects, Inside Man, Law Abiding Citizen, Storm
Notes: N/A
Fun Facts:
-Cronicas was produced by Alfonso Cuaron and Guillermo del Toro while it was directed by Ecuadorian filmmaker Sebastian Cordero who would eventually create the sci-fi movie Europa Report.
-Hilarious in Hindsight: The reporters have a pending story dealing in Medillin, Colombia. The main character Manolo is focused on the story in Ecuador that he doesn’t want to go to Colombia. Why is this a bit funny? Manolo is played by John Leguizamo who was born in Bogota, the largest city and capital of that country, so that would be the nation where his actor came from before moving to America.

-The news anchor Victor who briefly shows up on TV is played by Alfred Molina. For me, it was quite strange seeing Doctor Octopus with facial hair reporting the news.

-Cronicas takes place in Babahoyo, Ecuador which is in the Western part of that country. There are 96,956 people according to their 2010 census. The closest major city to it is Guayaquil which is Ecuador’s largest city.

What’s this? I’ve reviewing a movie from the only other country I’ve been in besides America? That’s right. This is the first time seeing a movie directly from Ecuador, so I was excited. I had a great time visiting that nation as I visited some of the major cities and even the Galapagos Islands. Don’t believe me? I have pictures of my adventures on my Autumn Peal Media blog where I show my video and photography projects. After visiting Ecuador, I felt compelled to check out a movie from that South American country.

Cronicas is about a group of reporters representing the show One Hour of the Truth. They traveled all the way from Miami to rural Babahoyo, Ecuador to cover a gruesome story. There’s been a serial child rapist who’s been murdering children throughout the country. After three children are found dead, a bible salesman named Vinicio Cepeda accidentally hits a boy who’s the twin brother of one of the victims. He’s caught by the twin’s father Don Lucho who gets a mob of people to beat him up and to burn him. Both Vinicio and Lucho are imprisoned. Lead reporter Manolo Bonilla finds out that Vinicio has information of the “Monster of Babahoyo” and wants the reporter to clear his name since he did save the bible salesman’s life.

For starters, I was impressed with the acting. All the actors did a great job playing their parts while also selling the emotions involved in this gruesome case. Damian Alcazar (known for his work in Narcos) as Vinicio did a fantastic job portraying this character. You can feel the grief as he didn’t expect to hit the child with his truck when it was too late to stop. At the same time, he also has the right amount of shadiness as he deflects some questions and his smile can be both pleasing, yet suspicious at the same time. The biggest surprise to me was John Leguizamo playing Manolo Bonilla. I was shocked that he was able to play a serious and intense role which was against type for the characters he typically plays. For those of you not familiar with Leguizamo’s other roles, he’s been in The Pest, played Luigi in the live-action Super Mario Bros. movie, and was in Moulin Rouge. Much like my observation of Jeremy Irons in the documentary Trashed (although for much different reasons), this is another actor who’s most famous for playing an animated role since he’s best known for voicing Sid from the Ice Age series. Leguizamo certainly surprised me in this leading role with the right amount of intensity, seriousness, and some sarcasm for the character. Another honorable mention would be Henry Layana playing Don Lucho. Playing this father with dead sons was just phenomenal where he wants to kill Vinicio. You can feel the seething and murderous rage as he starts the lynch mob, tries to burn Vinicio or constantly tries to attack him in jail whenever he has the chance. That guy needs a film career.

The production delivers, too. I’ve seen better looking movies, but the gritty visuals work so well in the impoverished rural Ecuadorian town. There is not some flashy movie which would be an inappropriate contrast with the subject matter. The earth tines of the town really work and the low lighting of the hotel scenes with the reporters made it appropriately dreary as they try to figure out the case. Aside from some minor editing issues with Vinicio bathing himself in the beginning and the unintentional period piece elements with the cell phones or even the airport scene in the finale (I’ve been to three different airports in Ecuador and all of them were WAY nicer and modern than the one shown here). Sebastian Cordero does know how to shoot and provide the right amount of color-correction to make it work.

Cronicas does get problematic though. This film does devolve into whodunnit territory after the first interview between Manolo and Vinicio. I wasn’t sure at first with the first interview, but it became clearly obvious who the Monster of Babahoyo really was. It wasn’t as clever as Cordero thought it was. The problem was that I was savvy to some of the clues to who the criminal really was. It was a foregone conclusion and found it quite predictable while looking at the right signs. There was also horrible timing with Manolo and cameraman Ivan digging in a mass grave to find a dead girl. Not even a minute after finding the clue, Manolo is back in the hotel and the producer Marisa has sex with him despite her being married to their boss. You know it’s sad that a woman cheating on her husband in a consequence-free setting (she never gets called out on it) is the least insulting thing when this was literally after Manolo and Ivan found the corpse of a child dug in a shallow grave. I did enjoy that Manolo gets called out for his selfish desires to be the hero in his reporting, but his character arc gets ruined by the ending despite the great success he gets for the story of Vinicio.

This Ecuadorian film did have potential to be great, but that greatness gets deflated. There is some good production with the cinematography which I appreciated. The Latin score with acoustic guitars did work on different levels. The acting was surprisingly good most of the time with some surprises from the normally comedic John Leguizamo. I did have issue with the predictable plot and some protagonist centered morality. Cronicas could have been a great movie, but I found it lacking in different parts, so it’s just alright.

Cons:
-Some editing issues
-Protagonist Centered Morality with Manolo and Marisa
-The killer becomes quite obvious not even midway through the film

Content Warning: Cronicas has certainly earned it’s R rating. There’s a ton of swearing in both Spanish and English. The main villain is a child rapist and killer which you thankfully don’t see, but those implications are as subtle as a shotgun blast. There’s a sex scene and you briefly see Manolo’s naked rear near the end of that scene. Ivan also has a habit of smoking marijuana if one looks closely when he’s rolling papers and smoking it.