Ghost in the Shell 2: Innocence Review 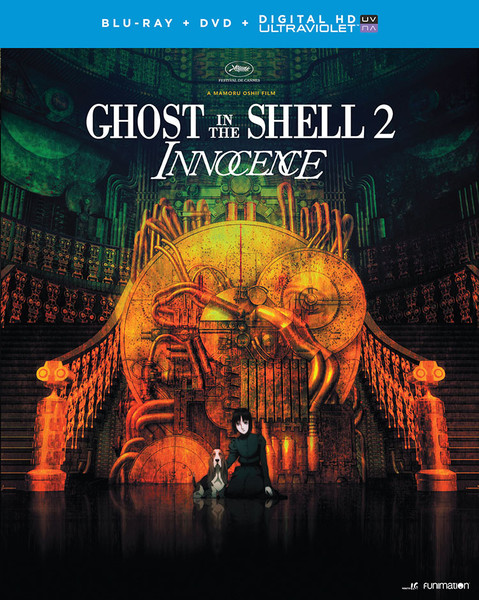 -The Funimation re-release was used for reviewing purposes.

-Ghost in the Shell 2: Innocence was originally released by Dreamworks/Go Fish and the original Region 1 DVD had no English dub and poor subtitles. Funimation added an English dub and the subtitles are corrected in the current release.

-This film takes place 3 years after the events of the original Ghost in the Shell film. It’s required to see the first film and/or Stand Alone Complex to understand the plot.
Fun Facts:
-Ghost in the Shell 2: Innocence wasn’t originally going to be a sequel to the original film despite using some of the characters. The original title was just going to be Innocence, but they added the GITS moniker for more notoriety.

-Remember that chorus used in the original film? They returned to do parts of the soundtrack and this time around, they were seventy-five members strong.

I’ve been really diving into the Ghost in the Shell series a lot lately. This is a bit strange for me because I don’t consider myself a hardcore GITS fan. It’s certainly one of the most influential sci-fi series out there as it inspired both Japanese and American media in numerous ways. I’d even say that the whole franchise did cyberpunk much better than Blade Runner did since the motifs and world-building haven’t aged that much. For some reason, the second movie has eluded me for quite some time, so I finally got a chance to watch Funimation’s re-release of this sequel.

How does this hold up?

Ghost in the Shell 2: Innocence takes place in Japan during the year 2032. After the events of the first film, Motoko Kusanagi is missing while her consciousness is on the Net. There have been a string of murders involving gynoids (that’s the term for female robots, by the way) where they explode and kill their owners and other victims. Said gynoids were also sex robots with custom specs, and they malfunctioned without any rhyme or reason. It’s up to Batou and his not-so-cybernetic partner Togusa from Section 9 to investigate these strange murders. Of course, it’s not so easy with dangers such as the local Yakuza, suspicious corporations, and overall bad people that know how to hack people’s cyberbrains.

Let’s talk about the animation first. Most of it is gorgeous. The hand-drawn 2D animation is pure vintage Production I. G. with fluid movements and the character designs are realistic. No moe blobs or generic shonen hero designs here; these characters have actual noses and normal-sized eyes. There’s also some CGI such as the opening credits which still holds up for quality digital animation. The parade scene was quite a spectacle as there are subtle movements between the parade-goers and the floats. There was a good balance with 2D and 3D animation for good measure. There’s even a quote from director and long-time Production I. G. stalwart Mamoru Oshii who stated that “Hollywood is relying more and more on 3D imaging like that of Shrek. The strength behind Japanese animation is based on the designer’s pencil. Even if he mixes 2D, 3D, and computer graphics, the foundation is still 2D. Only doing 3D does not interest me.” That was something I agree with and I find that quote to be prophetic, especially in regard to American animation. I mean, when was the last time you’ve seen a 2D animated film be played at movie theaters around? Princess and the Frog? That came out in 2009, so think about how long it’s been. Okay, there’s some CGI that has aged in Innocence, but that was few and far between. The movie as a whole still looks great and there are creative twists with the animation techniques such as the holograms, subtle reflections on different surfaces, and the action scenes.

I do admit that it was strange that Batou and Togusa were the main characters in a Ghost in the Shell movie. Sure, Batou is a regular in the series at large, but seeing him in particular as the lead protagonist was something I had to get used to. I’m glad that he gets character development and there’s a softer side shown of him whenever he’s with his basset hound at home. Yes, I find it ironic that I used the words “softer side” for a guy who gets to mow down Yakuza gangbangers with machine guns in one major fight scene, but he’s not always this stoic action hero who can break someone’s face in. To be fair, Batou is a lot smarter compared to several other characters played by anyone who would eventually end up being in The Expendables since he’s also a skilled hacker and can wax philosophy like no one’s business. Togusa is the typical family man cop partner. He’s he has nowhere near the amount of artificial cybernetics as Batou, he’s at a disadvantage when it comes to fights, but he also gets into disagreements on whether or not they should always attack potential suspects. Since he did talk about his wife and daughter a lot, I thought “Is Togusa going to die in this movie?”, but spoiler alert: he is still alive and well at the end of the movie. That was unintentionally subversive of that trope, so props to Oshii for not falling into that cliche when it comes to cop or army plot points.

While Ghost in the Shell 2 has admirable qualities, I wish I could say the same for the movie as a whole. The most obvious flaw in this movie was who doesn’t even show up for a good portion of it: Major Motoko Kusanagi. She doesn’t even show until the final battle scene and even then, it’s her voice and not her body as her consciousness hacks into one of the gynoids to help find Batou. While that reunion was powerful seeing her and Batou work together, it just wasn’t the same and I felt that Motoko should have shown up at least halfway through instead of the last half hour of the film. The Major has always been the key linchpin of the Ghost in the Shell universe and it was so awkward with her not being there for a vast majority of the movie. The producers need to look at ROD The TV and see how returning characters are done right when it comes to sequels. I mean, imagine things like DuckTales without Scrooge McDuck, the Dragon Ball franchise without Goku, or Arrested Development without Michael Bluth. That’s the kind of feeling I had. Also, I thought this philosophical quoting got very pretentious and overdone. These characters quote Richard Dawkins, Descartes, Confucius, and even the Bible itself like they were random movie lines memorized or like in-jokes at the most random times. I know Ghost in the Shell is big on philosophy, but other media wasn’t so overt about it. Even the characters in The Matrix, a movie series that literally wouldn’t exist without GITS (the Wachowskis even said so!) would say “Batou, Togusa…calm down!” when it comes to this. I also thought most of the villains weren’t threatening enough and the ending was a bit unfulfilling despite solving the case. While this film looks amazing, I thought that Ghost in the Shell 2 tried way too hard to be deep and cerebral than what it really was. No, doing all that quoting and adding mind-screw elements doesn’t make a film more intellectual.

Ghost in the Shell 2 was a disappointing entry into a well-known sci-fi series and it should’ve been so much better than what it was. The production quality is certainly admirable and there is a chockful of creativity in how it was animated which I do applaud. The music provided by Kenji Kawai was an astounding return to form like the original film’s soundtrack but with some jazz and ambient elements thrown in. The characters do get a good amount of development, but the lack of Motoko Kusanagi makes the plot and mood feel hollow as Batou and Togusa aren’t strong enough as lead characters to anchor everything down. The excessive philosophy name-dropping got on my nerves and it felt like Oshii was saying “Hey! Look at how smart and cultured I am!” more often than not. I like philosophy in anime (which I see more often than Western counterparts), but it’s better to show and not tell for this kind of material. Even though the Arise prequels aren’t as deep, I found more redeeming qualities in its unpretentious attitude even in the films that aren’t so great. I’d reserve Ghost in the Shell 2 for die-hard fans only.

Content Warning: This got a PG-13 rating here in America. While it’s not as graphic as its predecessor, Ghost in the Shell 2 does push that rating from time to time. The fights can get gory and one redshirt gets his head sliced cleanly off his neck. The gynoids are nude, but they don’t emphasize human anatomy as much as in Motoko’s nude scenes in the first film. There’s even a child trafficking subplot with the Ghost Dubbing machine. Even though the actions aren’t shown, there’s certainly enough fridge horror as the villains have abducted girls for the gynoid experiment. Some of the images can be disturbing like a gynoid early on is ripping her artificial flesh off before exploding.