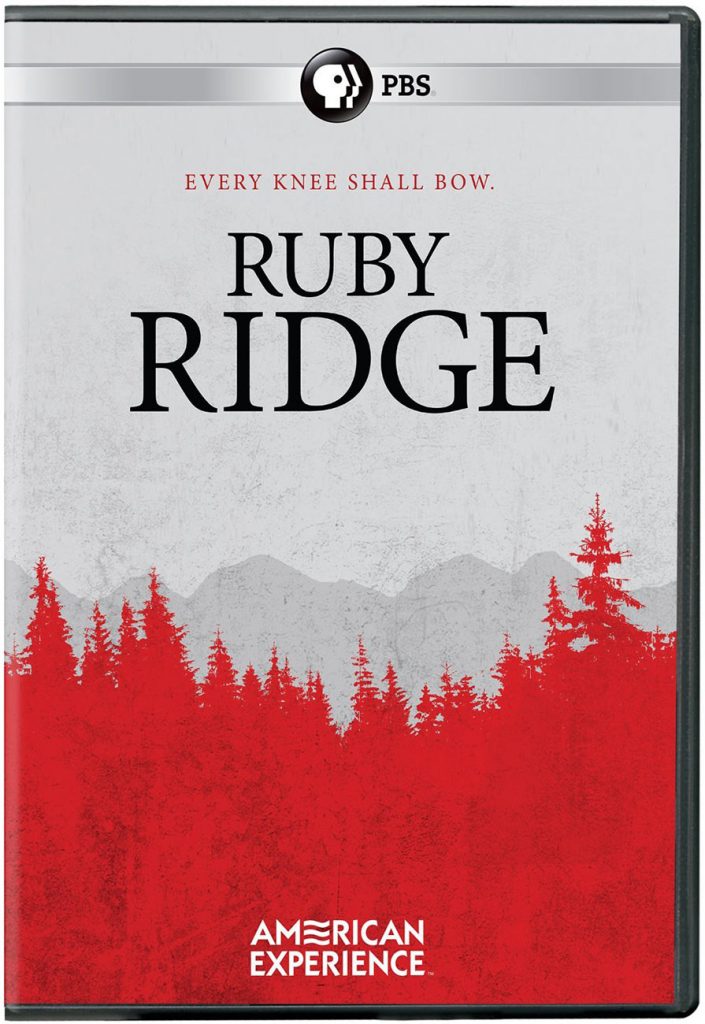 -Director Barak Goodman has also worked on Scottsdale: An American Tragedy, The Italian Americans, and Daley: The Last Boss.

-On the DVD cover, it has the subtitle of “Every Knee Shall Bow.” In addition to it being an obvious Biblical reference, it’s also the same name of a book that also dealt with the Ruby Ridge incident by Jess Walter.

These events that have happened recently should be waking people up. There’s a problem in this country that the media rarely ever talks about. Whether it’s the stabbing of three people in Portland, a black soldier being shot in New York City, and with the insanity that happened in Charlottesville, there’s one common thread to these tragedies: White Supremacy. This has been going on for decades, but these cases get under-reported compared to crimes of those committed by ethnic minorities in America and even abroad. However, these cases are treated with kids gloves. There’s one case that happened back in the 90s that did get some media attention though.

Ruby Ridge is a documentary that recalls the events that dealt with a White Supremacist and his family. In 1992, Randy Weaver was busy living life in a cabin in Northern Idaho in a tiny town of the same name as the film’s title fifty miles South of the Canadian border. Him and his family moved from Iowa to live in this mountainous terrain as he started harboring religious beliefs that the apocalypse was coming and that the government was out to get them. In Idaho, he started attending meetings with the Aryan Nations where him and the other Weavers were indoctrinated in the ideologies of White Nationalism and the “preservation” of the white race. To make some money, Randy sold some sawed-off shotguns which caught the attention of the ATF. To make matters worse, one of the cops got shot and killed while Randy’s fourteen year old son Samuel was killed while he held onto a shotgun. This triggers (no pun intended) a federal investigation where the authorities are trying to arrest Randy Weaver before all hell broke loose.

This documentary has some great production behind it. There’s a mixture of crisp mountain shots of Idaho, some clean frames even if it’s with talking head interviews, and archived news footage from that event. Things meshed very well despite the varying ages of the film involved. Ruby Ridge also knew when to use those elements well with the official footage from the news and from the cops themselves when the historical events are playing out. They don’t censor anything with people cussing out the cops and pictures of bodies that are clearly dead. The filmmakers don’t pull any punches here in the presentation aspect.

Watching Ruby Ridge did cause some boiling rage in me. Not because the content was horrible or anything, it’s because of how the situation played out and the double standards involved. Prior to watching this documentary, I remember only hearing about the Ruby Ridge event in passing. Despite me being a baby when this happened, I was never told about this. It was bad enough showing the Aryan Nations compound with their Confederate flags, Swastikas, and other insignia associated with their movement, but how people handled the situation just disgusted me. After Samuel is holding a shotgun and threatening the cops before being killed, you see people from Aryan Nations calling the feds “baby killers” and trying to assault them. Those same people would never have that kind of outrage for someone like a Tamir Rice, and I’ll leave it at that. I was also frustrated at the police for being too restrained in trying to apprehend Randy Weaver and company. Anyone with half a brain should know that if the Weavers were black or brown, the cops would have mowed them all down with bullets without a second thought. Don’t lie. You know it would happen. It all started with Randy not showing up to court for the charges of illegally selling those shotguns before the situation escalated to this level of carnage with people dying while the Weavers become martyrs and unsung heroes to their friends. I seriously doubt anyone said that Randy “should’ve complied with the cops”, “looked menacing” (saying nothing about him being armed at all times), “being on drugs”, or even calling him a criminal because those talking points are for OTHER people, right? Right?! RIGHT?!? This was a tragedy which I won’t deny, but the events that transpired are hard to watch given the current sociopolitical climate even thought the aftermath proved me right in so many ways.

There were multiple sides represented in Ruby Ridge. You had a mixture of reporters, policemen who were at the scene, and Sara Weaver who is Randy’s daughter to name a few. All of them were quite solemn as they were talking about everything that happened. They each had their personal insights and since many of the interviewees were at Ruby Ridge, they had lots of veracity to their viewpoints. Sara was the most emotional of all the interviewees, and as much as I hate to admit it, she had every right to be. She lost her older brother and then her mom who died literally in front of her to the point where Sara said that parts of her own mother were splattered over her own body as a child. That was traumatizing regardless on what side one is on in this issue. She teared up pretty hard at the more graphic elements. However, what really caught my eye was her claiming that she and her family felt like they were hunted and how oppressed they were. Part of me wants to sympathize given her losses, but there’s another part that want to say “Now you know how POCs have felt for centuries in America.” as a truth bomb to her. I did appreciate there being some differing opinions even though some of them are flawed.

Besides my anger hearing about the events in Idaho, there were some issues that can’t be ignored. The most minor one would be the over-reliance of talking head interviews. That was one gripe I had with the brilliant Hate Crimes in the Heartland and this applies here. I also believed that there was a lack of interviewees who were friends of Randy or possibly (if they dared) getting the Aryan Nations people to be interviewed. I wonder why they didn’t go the extra mile by talking about this sobering story since this does apply to Randy and company. The ending was rushed and there’s barely even an aftermath. Although, the aftermath of this that is mentioned and doing research for Ruby Ridge will infuriate you. I won’t give away all the details, but let me put it this way…This will prove certain people right that there is a two-tiered justice system and there are facts that people have been imprisoned and/or executed for far less.

Ruby Ridge was a morbid documentary that captures a bloody event. The visuals really worked to heighten the history and storylines themselves. There was a risk in making a documentary this year with the noted White Supremacy-related attacks. This will let people know that all races can and will be targeted in these situations (everyone in the film and the real-life events are Caucasian, so that “anti-White movie” strawman fails hard especially for this doc). However, watching Ruby Ridge will cause you to be angry and/or depressed given the subject matter and one’s own personal thoughts on the justice system. I do wish they would’ve provided more context with the aftermath and gotten more people to be interviewed though. It’s a sobering film to watch and it will cause someone to think about how certain criminals are treated.

Adjustable Rating System:
Add 1 point if you like historical documentaries
Subtract 2-3 points if the concept of White Supremacy really makes you anxious

Cons:
-Lack of representation of certain sides
-Rushed ending
-The aftermath will anger you

Content Warning: Just because it’s a PBS production, doesn’t mean it’s going to be family friendly. Ruby Ridge is one of those productions. There’s very strong language coming from the White Supremacists who sympathize with Randy Weaver. There are deaths shown and strongly implied like the body bag scene. Did I forget to mention that there’s a White Supremacist element in this film? There are some clips of these people doing Nazi salutes, waving flags with KKK/Neo-Nazi/White Nationalist imagery including a little girl in an unintentionally disturbing scene, and there’s an ideology that involves separating or killing nonwhites and Jews.