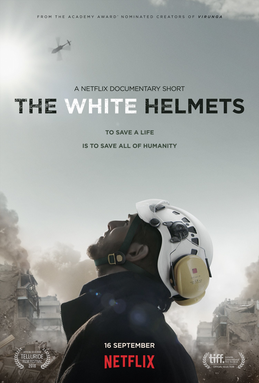 AKA: N/A
Genre: Docudrama
Year Released: 2016
Distributor: Netflix
Origin: UK/Syria
Running Time: 40 minutes
Rating/Recommended Audience: PG-13
Related Films/Series: N/A
For Fans Of: The Square, Extremis, Winter on Fire
Notes: N/A
Fun Facts:
-The White Helmets won an Oscar for Best Documentary (Short Subject). Despite the Oscar win, many of the White Helmets couldn’t make it due to escalating conflicts in their native Syria, and cinematographer Khaled Khateeb was blocked from going to America due to Homeland Security despite being one of the people involved in making this film.
-The White Helmets group have received the 2016 Humanitarian award and they’ve won the 2016 Right Livelihood Award AKA the Alternative Nobel Prize.

-Director Orlando von Einsiedel used to be a professional snowboarder before he got into filming. Interestingly enough, his 2nd film he directed was the documentary We Ride: The Story of Snowboarding.

Syria has been a hot geopolitical topic for the past few years. There’s the ongoing civil war, the threat of ISIS, Assad’s rule of that country, and the country becoming a living hell for millions of people living there. With all of the dreadful news that’s been coming out of that nation for years, there’s one aspect that never got that much mainstream attention: the people who’ve been rescuing innocent civilians.

The White Helmets is about the Syria Civil Defense, but they are better known by the color of their helmets. They are a volunteer nonprofit organization dedicated to saving the lives of their fellow compatriots attacked by airstrikes, bombs, and other forms of warfare. Most of the documentary focuses on the chapter in Aleppo, which is one of the biggest hit cities in the country. They respond quicker than the cops or soldiers as they rescue whoever they can from collapsed buildings, rubble, or if they need immediate medical attention. Various members of the SCD are interviewed in-between some of the footage of their rescue attempts.

I had never heard of these White Helmets before, and I’m glad someone is shedding light on people who are doing their best to save others in a dire war-torn environment. These brave men are doing this for the right reasons as they see victims as people who could be their family despite them not being related. They certainly aren’t doing this for the money since these rescuers are part of an organization that relies on donations while each person gets a $150 monthly stipend. What’s even more fascinating is that several of the interviewed rescue workers have a sense of hope despite the situation they are in. They smile sometimes and one White Helmet even says “Without hope, what good is life?” as he explains that it’s important to hold onto this hope in a bloodied and battered Syria. Their reality is grim, but they still believe that justice will prevail. These emergency workers are able to tell the difference between a war plane and a regular one just by how it sounds and one of the worker’s sons who’s only two years old can tell a plane is a war plane before it drops a bomb. That’s how conscious people are in Syria as they are being attacked by ISIS or Russian intervention as shown in this documentary. It becomes part of the norm in their lives so much, that when these workers go to Southern Turkey to do professional training, they were stunned by how calm that country was and with the lack of destruction. Yes, I know there were attacks in Istanbul and Ankara, but when you compare Turkey at large to Syria right now, it might as well be utopia for the SCD.

The production is quite solid in The White Helmets. During the interview scenes or calmer moments, there’s high quality cinematography with clean and crisp visuals. The camera style switches up to lower grade cameras, a GoPro camera in a couple of scenes, some iPhone footage, and some shaky cam stuff. Yes, I’m aware that shaky cam footage has been a cliche and a bad gimmick in action and war drama movies, but this wasn’t gimmicky at all. There were cameras rolling as the bombs dropped, so this was out of necessity and it only adds to the brutal realism of The White Helmets as the viewer can see, hear, and even feel the atrocities happening in their communities. You can’t fake a war zone like this as this action happens in the heart of Aleppo. Even when there aren’t any attacks, there are dilapidated buildings, crumbling streets, and a severe lack of construction going on. This had a metaphorical quality which shows the aftereffects of destruction always following the innocent people who can’t escape their country. There’s also the “miracle baby” scene where one of the White Helmets rescues an infant under tons of rubble. That was a powerful scene and it should be up there with iconic scenes such as the Odessa Steps in Battleship Potemkin in terms of emotional impact and imagery.

While the stories and production are quite powerful, The White Helmets could improve in different ways. Most of the attacks they focus on involve ISIS insurgents and the Russians as they kill civilians. Yes, those factions needed to be addressed and called out with all the video evidence that was captured, but the presentation made it seem like they were the only ones attacking the noncombatants which gave it a bit of a propagandist slant in some of those scenes and I’ll leave it at that. I also had a hard time keeping track of some of the White Helmets interviewed. I remembered some of their names such as Abu Omar, Khaled Harrah, and Mohammed Farah, but things happens so fast that I had to keep track of all the names and faces. They also should’ve interviewed Raed Saleh more often since he is the leader/founder of the SCD. He shows up briefly in the Turkey training scenes, but I would’ve liked the filmmakers pick his brain a bit to find out what it was like being in charge of this organization. There were also some issues with the timing of the events in the film and the release date. I get that editing a film takes a long time since I do some video work myself, but there are elements off-camera that make The White Helmets harsher in hindsight. Some of the people who were interviewed have been killed long after the cameras stopped rolling including Khaled Harrah who rescued Mahmoud the miracle baby. There were also some unprofessional things that some of the workers did after the film such as parodying the Mannequin Challenge in a fake rescue attempt or one worker being suspended after dumping dead soldiers. Some of these facts are chilling and can make multiple viewings more uncomfortable.

The White Helmets is a solid short documentary from Netflix’s original film line. The production is edgy yet effective as it shows the realities of war while also focusing on the positive stories of the SCD saving innocent lives in Aleppo and beyond. There are touching stories here and I’m glad there’s a movie like this that breaks stereotypes of Syrians. I’ll even admit that many of those volunteers are better than other rescue forces for consistently being in ravaged areas that would make impoverish areas in first world countries look nice by comparison. Their resolve to save anyone who’s hurt is also admirable. It does falter a bit by only mentioning some of the obvious combatants who’ve hurt or killed the Syrian civilians and with the later histories after this movie was filmed. At only forty minutes, it’s a quick, yet eye-opening documentary. I’m going to end this review by quoting the slogan of The White Helmets organization.

“To save a life is to save all of humanity.”

Adjustable Point System:
Add 1 point if you like feel-good stories about rescuing others.
Subtract 1-3 points if you feel uncomfortable about real-life war situations filmed.

Cons:
-Some slanted narratives
-Later history of the White Helmets can hamper future viewings
-Lack of development for some of the emergency workers

Content Warning: Teens and up. There are several attacks filmed in this movie. People die and some of the victims are quite bloody. This is as real as it gets in the presentation, so if you watch something glamorizing war, then The White Helmets will smack you in the face with a cold helping of brutal reality.