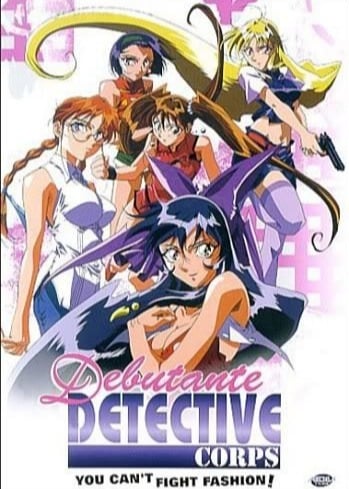 -This OVA was directed by Akiyuki Shinbo. He’s worked on some obscure anime series like Metal Fighter Miku, but he would eventually get more popular after directing Lyrical Nanoha and eventually Madoka Magica. Yeah, really.

-Larissa Wolcott who did the English dub voice of Reika has also voiced Wedding Peach and did the voice of Excel from Excel Saga in the 2nd half of the series.

I swear the 90s was the decade of OVAs.

That form of releasing anime series directly to video is a lost art after the technology of streaming and the emphasis placed on TV series and movies in Japan. That format can be a double-edged sword. I’ve adulated anime OVAs in the past such as Read or Die, Shinesman, and Key the Metal Idol for their quality in their respective series. At the same time, there can be a downside when it comes to anime OVAs.

Debutante Detective Corps takes place in a prestigious all-girls school in Japan. As the new school year opens up, there are five girls who make rather massive entrances as they are tardy for the first day of school. These girls in particular are the Russian gun nut Nina Kirov, the super genius master of disguise Youko Ryuuzaki, Chinese-Japanese kung fu expert Reika Syu, and the fraternal Ayanokouji twins. There’s Miyuki who’s a tomboyish mechanical expert while there’s her sister Kimiko who’s a clairvoyant who revels in her wealth. The five girls in particular have a combined wealth that’s equivalent to Japan’s GNP since their families are in high places in the country. They’re targeted by some runaway murderers at their school and they have to stop them.

Personally, that last paragraph has more depth than this short OVA and I wanted to make it shorter. It’s a really basic plot with these five rich girls trying to stop a wacky murder plot. Since the police are already on site partially because of Kimiko’s entourage in blue when she enters, you would think they would be smart to have them around for extra protection. NOPE! They try to get the cops out of their hair while they try to solve everything themselves. What could possibly go wrong? I don’t know, fighter jets, crazy snipers, a man who can turn into a giant, and a bomb that resembles an avant-garde nude statue in the school. What? Didn’t you go to a school like this? Yeah, it’s quite contrived even in the parameters of parody.

The characters are caricatures at best. Nina is some gun-crazy girl who has tons of assault weapons while also hiding ammunition and cartridges in her lingerie. Youko is your typical nerdy girl, but her main trait is that she can imitate people’s voices including men with voices several octaves beneath her normal vocal range, and is able to imitate anyone if she’s only seen them once. Reika is your average ditzy girl with the exception of pulling off some Dragon Ball Z-type moves on people. Miyuki does have the most personality and is unintentionally the voice of reason as she wants to save people and not take crap from anyone, but she gets undermined later in this OVA. The villains are nothing to write home about as they make Die Hard goons look like three-dimensional characters.

Do you think I forgot about Kimiko? You’d be wrong. In my opinion, she’s the real villain of Debutante Detective Corps despite being the lead heroine. She is so prissy and narcissistic, that she would make Georgette from Oliver & Company want to smack her. All she cares about is being treated like a lady, dressing up nicely, and looking like the good girl. Side note: Am I the only person who thinks she looks like Sakura Shinguji from Sakura Wars when she wears that traditional Japanese dress? Okay, back to my point about this character, she intentionally botches the mission while almost getting people killed in the process. What makes her character incredibly insufferable when all is said and done is that [MAJOR SPOILER ALERT!] Kimiko is the real mastermind by hiring those criminals to attack the girls and the entire school. Despite some cheap laughs in this anime, her actions bring up the biggest flaw of the whole OVA: her protagonist-centered morality.

You’ve probably seen me use that term in some of my other reviews. For those of you that don’t know, protagonist centered morality (or PCM for short) is a terrible form of writing that involves characters who are heroes doing straight-up villainous things that are consequence-free and the only reason why they get away with this is because said character or characters are the “good guys”. This is horrific writing and characterization because it puts the heroes on the same moral parameters as the villains. It’s not just unique to Debutante Detective Corps as there are other examples of protagonists doing questionable things and getting a free pass by doing them because they’re on the good side. There’s the infamous “One Course Meal” episode of Spongebob Squarepants where Mr. Crabs bullies Plankton to the point where that tiny villain wants to commit suicide. You do know that bullying someone to cause them to kill themselves still counts as murder, right? There’s Sinbad, the title character from Sinbad: Legend of the Seven Seas who sells out the prince and steals his girl in the process (even the main villain Eris calls him out on this!). A more controversial example given how many people like this movie would be Mufasa punishing the hyenas by annexing them away from the Pride Lands while starving them out. You do know that’s an attempt at genocide regardless if they did something bad or not, right? Then, there’s Teen Titans Go! which has severe PCM almost every episode, and well…there’s a reason why all five of the Titans are listed on the Villains Wiki, and I’ll leave it at that. This is a trope that needs to die and it ruins my enjoyment of movies and anime.

Here’s a list of the stuff Kimiko Ayanokouji does that is a tremendous case of severe PCM:
-Takes advantage of the police.
-Attempts to seduce a detective despite her being a teenager and him being an adult (thankfully, he refuses).
-Takes a shower despite the rest of the girls being in danger.
-Plays innocent despite her snooty attitude.
-Diverts the other girls despite the rest of them legitimately trying to stop the criminals.
-Allows the criminals to destroy the school grounds and possibly have killed students and/or faculty off-screen regardless of fridge horror or not.
-Admits to being the mastermind behind the whole thing, yet doesn’t own up to her wrongdoings.
-Bribes the principal with 100 billion yen to fix the whole school as a “get out of jail free” card.

Seriously, this is stuff only a villain would do, so why is she one of the good guys? This makes Kimiko so loathsome as a protagonist on so many levels.

Debutante Detective Corps is just a bad OVA. The plot is very shallow and most of the characters aren’t fleshed out. The animation is typical 90s stuff that isn’t horrible, but I’ve seen anime created earlier that has better animation. The music is generic J-Pop with so many outdated synth tracks that may as well have been recorded a decade earlier. Speaking of which, I almost thought I heard the intro to “Jump” by Van Halen when Miyuki drops in the school on her motorcycle. There are a couple of funny moments like Nina’s bubblegum rifle or the chief arresting the principal, but they were few and far between. Beyond the shallowness was Kimiko being one of the worst protagonists I’ve ever seen in anime, and the only reason why she gets away with several felonies is that she’s a rich girl. What a horrible message to send and it wasn’t meant to be part of the parody elements. To all you fans of director Akiyuki Shinbo, listen up. Just because he was awarded as the best anime director because of his work on Madoka Magica doesn’t mean his other stuff isn’t crap. I’d say the same thing if Yoshitoshi ABe, Makoto Shinkai, or Satoshi Kon directed this schlockfest. Please stop giving carte blanche to directors and filmmakers just because you like most of their work. Bad anime is still bad anime. Skip this OVA. If you want to watch other parody anime series, then check out Shinesman which is infinitely funnier and has better writing.

Adjustable Point System:
Add 1-2 points if you like turning your brain off when watching anime or action flicks

Pros:
-The bubblegum rifle joke
-The principal being arrested
-Miyuki calls out her twin sister for her reckless behavior

Content Warning: Teens and up assuming they can stomach this garbage. There’s some violence, but nothing too major except for an obvious Psycho parody scene where the girls are watching a horror movie with some blood. There’s definitely some fan service and some sexual references like Kimiko macking on a very reluctant detective. The principal joke involves the police chief egging on the head of the all-girls school by having him confess that he gets aroused sometimes when he’s in the gym before the chief says “Arrest this child molester!” before the principal is in the back seat of a squad car.