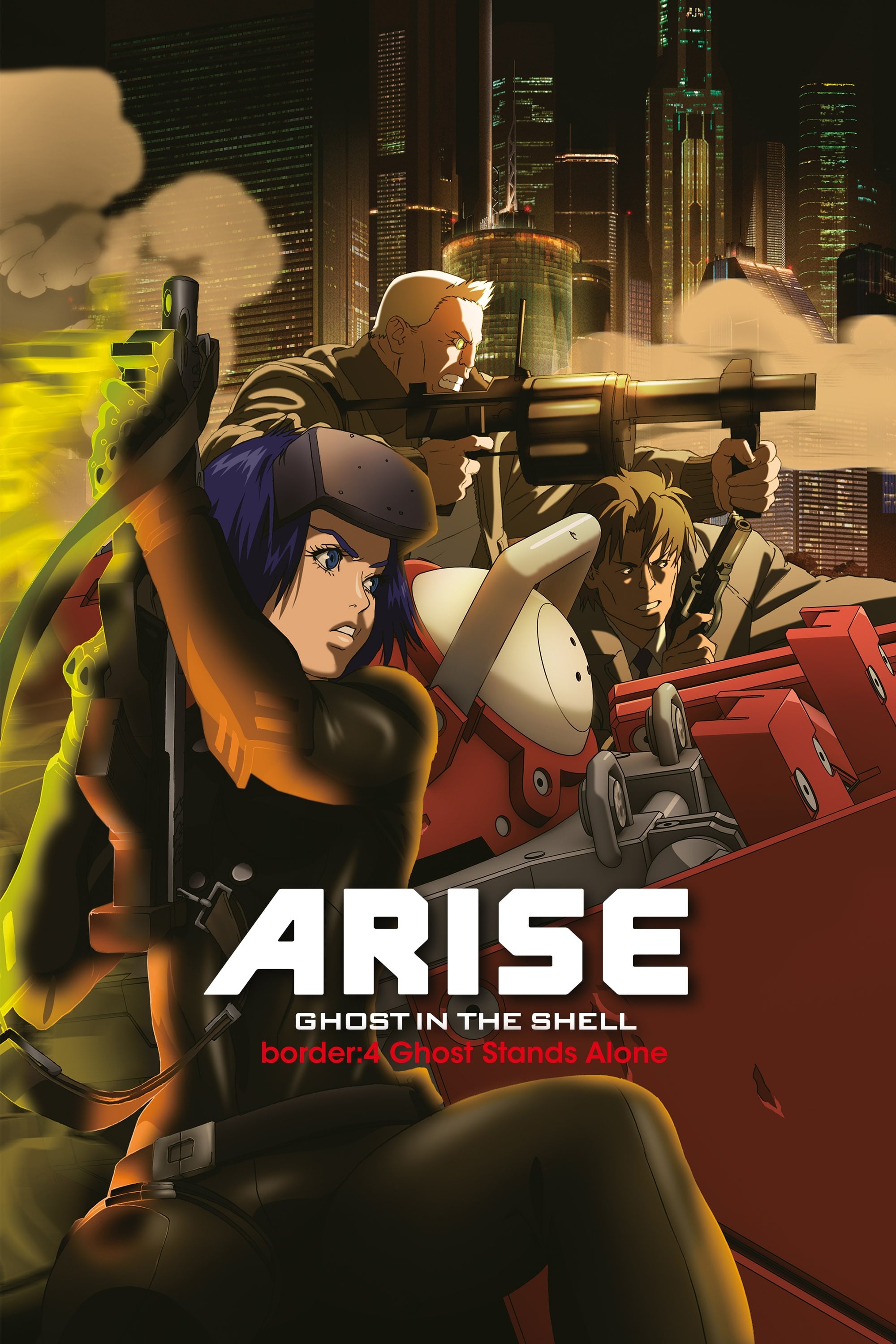 -This is the 4th of 5 films in the Arise prequel series. It is strongly recommended to watch the previous three films, especially for this one since it continues the “Fire-Starter” arc from Ghost Tears.
Fun Facts:
-Fandom Bonus: Any Eagle-eyed GITS fan will appreciate some of the references in Ghost Stands Alone. The building jump scene is recreated in this film, the concept of Ghost Dubbing returns from GITS 2: Innocence as it becomes a major plot point with one supporting character, and the title is an obvious callback to the TV series known as Stand Alone Complex. There’s even a scene in the ending where Batou and Motoko are on a boat and talk about swimming. Remind you of a certain scene in the first film?

-The ending theme “Split Spirit” is done by Yukihiro Takahashi of Yellow Magic Orchestra fame. Not only that, but he also helped compose some of the music from Nadia: Secret of Blue Water. Hmm, looks like Mr. Takahashi has helped with anime series that influenced American movies except that no one who worked on a certain movie with obvious similarities to Nadia gave credit to its progenitor.

-One of Motoko’s subordinates Borma is played in the Japanese version by Kazuya Nakai whom otaku should know for voicing various swordsmen characters such as Zoro from One Piece, Mugen from Samurai Champloo, and Toshiro from Gintama. However, Borma uses guns instead of swords though.

Someone call DJ Khaled to come over here because this review is a perfect example of the famous “…and another one” meme. In this case, this is another one involving reviewing the Ghost in the Shell: Arise prequels. I’m now at the penultimate film in this five-part series (or six if you count GITS: The New Movie), as I keep on trucking for stuff to watch and review for all of you at Iridium Eye.

Ghost Stands Alone takes place shortly after the Mermaid’s Leg incident in Ghost Tears. The Qhardi cartel is still at large, and there have been various hackings into people’s cyberbrains. It becomes an unprecedented level of mass hacking during a tense sociopolitical time where protestors are challenging a business deal between Dr. Thied and a Japanese businessman to a deal with this Qhardi water company as war orphans are barely getting clean water. The hacking becomes so intense that the police force guns down unarmed protestors before gunning other cops leaving several dozens of people dead on the streets outside of the company’s building during a huge gala event. The culprit is connected to Fire-Starter, the infamous cyberterrorist that’s eluded Section 9, the local authorities, and Motoko’s task force. They find a girl named Emma Tsuda AKA Tin Girl who seems to know something about Fire-Starter and the cyberbrain hacking. Motoko tries to hack into her brain only to be blocked access and her team finds out that Emma has two Ghosts inside her cybernetic body.

For those who have read my Ghost Tears review, you may have noticed that I was disappointed in the storylines in that one, but one thing that I do appreciate in hindsight is that the previous film actually provides way more progression in the story even more so than the first two films. The characters such as Dr. Thied and Colonel Hozumi’s crew return, so there’s direct lineage through Ghost Tears’ story. This sets up more danger as this Fire-Starter figure is still wanted and there’s more danger involved as this individual is one of the best cyberbrain hackers out there and even Motoko herself fails in overriding that person’s attempts at brain jacking others. This was definitely an improvement and I really feel like I’m watching something that’s part of a trilogy instead of just random episodes.

Motoko gets called out for her recklessness and she even makes some mistakes in this film. It allowed for greater development especially after she kills Dr. Thied very early on in Ghost Stands Alone with Aramaki giving her the business about her action. Sure, he may have been bureaucratic and Motoko had some defensible points in doing so, Aramaki made some very legitimate remarks on calling her out. Even the danger with Fire-Starter was something she couldn’t handle as her unknown opponent is messing around with people’s lives. The situation with her and Emma does bring a familiar twist to the Ghost in the Shell paracosm, but it’s done in a unique way. They find out that Emma has been Ghost Dubbed, but she has two Ghosts inside her body. It’s surreal because you have Emma talking like a teenage girl, but she later gets the voice of a man whose Ghost belongs to her partner-in-crime Brinda Jr. Sometimes, both voices talk at the same time in her body which makes her creepy. It sort of reminded me of the Puppet Master from the original movie in a way because that villain was a male voice emitting from a female robot’s body. This was a nice call back to the other films in the franchise and it didn’t come across as pandering to the GITS fanbase. It also didn’t hurt to have some action scenes, especially with Motoko and Batou teaming up as they should.

Ghost Stands Alone, like most of the Arise films aren’t always the best example of Ghost in the Shell. One thing I noticed was a drop in animation quality. It’s still above average in quality, but compared to the previous three films or even the original theatrical films, it looked mediocre. The action scenes looked choppy half the time which was a shame. Sure, there was that cool part of Batou and Motoko exchanging each other’s guns in the air before covering each other from their opponents, but I felt like Production I. G was asleep at the wheel for this film. A similar gripe I had with Ghost Tears was the lame usage of references. Think about it, the original films have referenced philosophers and scientific theories, but things have been downgraded in mediocre ways. First, we make a lame reference involving Disney’s version of The Little Mermaid in Ghost Tears, but in this film, there are overt references to The Wizard of Oz of all things. Emma is known as the Tin Girl while Brinda Jr. is nicknamed Scarecrow. There are virtual reality moments where those characters are shown as those aforementioned Oz characters in the Net including a scene near the end where they walk on a yellow brick road. Also, when Togusa almost gets hacked, he calls himself the Lion after Emma makes cryptic remarks about how the lion will bring courage to the world or whatever. The parallels were too cheesy for a cerebral sci-fi series like this, and I wish they would’ve done something different.

The fourth film in the Arise series was a return to form even though it’s still not the best in this franchise. Ghost Stands Alone did improve in the storytelling and characterization. I really liked how the story is really going somewhere with the Fire-Starter situation and how their jobs become more difficult. I also liked seeing more of Motoko’s flaws and how she isn’t a perfect leader for her team while still being competent at what she does. It was disappointing seeing the animation not being up to par like previous incarnations of Ghost in the Shell especially given Production I. G’s track record. Ghost Stands Alone is an improvement over the previous Arise film and this is roughly as good as Ghost Whispers thus far.

Pros:
-Great storyline progression with the Fire-Starter arc
-Good character development
-Motoko and Batou teaming up again as a delightful return to form.

Cons:
-Degraded animation
-Lame Wizard of Oz parallels
-The slaughtering of unarmed protestors by the hacked cops in the beginning is MUCH harsher in hindsight

Content Warning: This is definitely for older audiences only still. The violence can be graphic like cybernetic limbs being ripped off or blown off. The cyberhacking scene with the police is really hard to watch as they shoot protestors before they kill the other policemen on the squad. There’s some strong language present here. Some scenes do have some sexual dialogue and situations like Motoko “stripping” Batou in a virtual reality meeting even though Batou’s crotch is censored. Later on, Batou straight up tells Motoko that he wants to see her in a swimsuit which she says will be rain checked. Out of context of their relationship, it could be sexual harassment, so I wouldn’t repeat any of their dialogue from this film in those scenes.