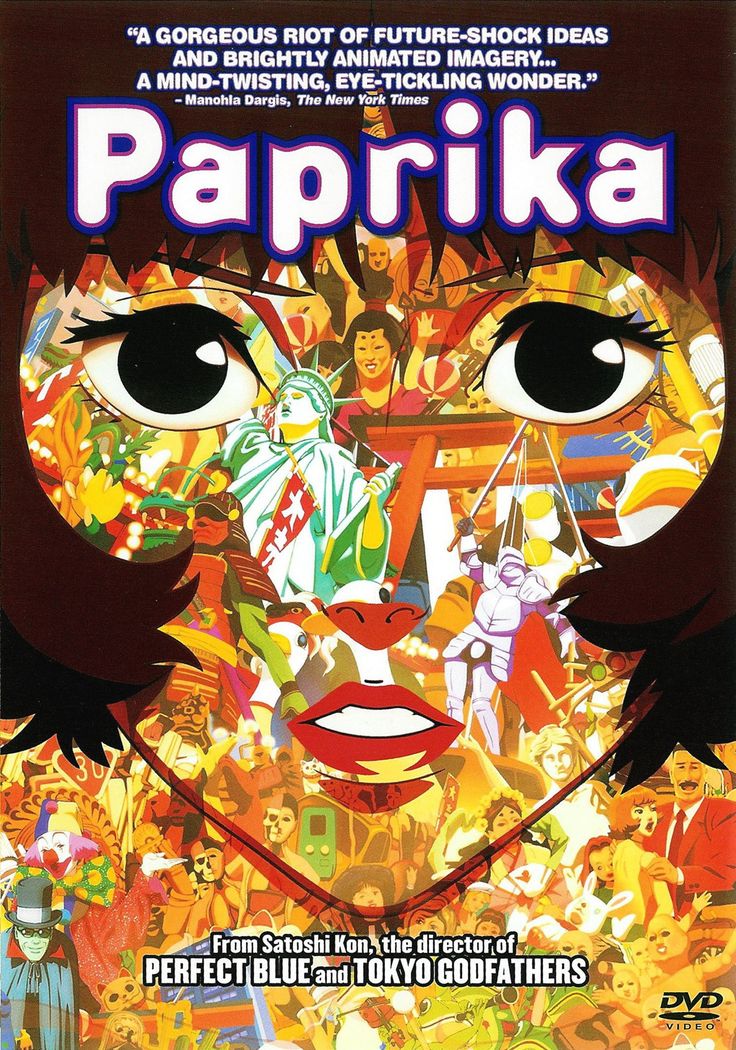 AKA: N/A
Genre: Sci-Fi/Experimental/Psychological Thriller
Year Released: 2006
Distributor: Sony Pictures Classics
Origin: Japan
Running Time: 90 minutes
Rating/Recommended Audience: R
Related Films/Series: Paprika (upcoming American live-action series)
For Fans Of: Inception, Paranoia Agent, Ghost in the Shell, Akira, Perfect Blue
Notes:
-The Japanese language track was used for this review.
Fun Facts:
-Paprika is based on a book by Yasutaka Tsutsui which was published in 1993. This is from the same author who would write The Girl Who Leapt Through Time which got animated the same decade as Paprika.

-Elijah Wood has admitted to being a fan of this movie. That’s right, Frodo himself digs the work of Satoshi Kon.

-This is the last film that Satoshi Kon finished before he died.

-Fandom Bonus: The final scene at the movie theater has posters to Satoshi Kon’s other works with Tokyo Godfathers and Millennium Actress.

-Dr. Kosaku Tokita, the morbidly obese inventor of the DC Mini and main character Dr. Atsuko Chiba’s sidekick is played by a Japanese voice actor who played several roles that are polar opposites of that character. Which heroes, you ask? Saint Seiya, Amuro Ray from Mobile Suit Gundam, and Tuxedo Mask from Sailor Moon. Yes, a man who’s played anime heroes with adoring fans (and fangirls) played Dr. Tokita. Talk about casting against type.   That’s right. It’s none other than Toru Furuya!

-Controversy Alert: There has been a plagiarism controversy connecting this film to Christopher Nolan’s Inception. Both films deal with dreams as major plot points despite having different characters. Some of this matter will be discussed in this review.

Satoshi Kon is someone I feel sorry for. I’ve checked out most of his filmography such as Millennium Actress, Tokyo Godfathers, and Perfect Blue. I’ve enjoyed all of those films and it is depressing that he died way too soon at the age of forty-six to cancer. This man was a brilliant animator and director who I felt had way more material than what he released to the world so far. I guess it’s about as good a time as any to re-watch his final full-length film that I remember watching a decade ago when it was first released stateside.

Paprika takes place in a possible future where some psychiatric doctors and scientists have a new treatment device called the DC Mini. This machine allows anyone to go inside their own dreams, record them like a DVR, and find possible ways to treat the psyche. However, the DC Mini is stolen and there are some negative effects to using them which include delusions on a grand scale, connecting other people’s dreams together, and even to the point where reality and fantasy can converge in subtle and overt ways. It’s up to Dr. Atsuko Chiba and her dream world alter-ego Paprika to stop the thievery and tampering of this new invention.

I remember being impressed with the animation back then, but it really holds up still right now. I’d say the visual production of Paprika is easily one of the best if not the best thing Studio Madhouse has done in their entire filmography. The colors are super lush, the movement is super-fluid, and there is so much creativity with the elements such as the dream parade, the genre shifts during some of the dream sequences and with Paprika jumping from posters trucks, and other things. Satoshi Kon has a knack for artistry, but also the gleefully bizarre and he certainly had the budget to pull this off with the movies he’s directed. This is clearly the best-looking thing he’s done in his entire life. The action sequences are full of mind-screwy things, but they do make sense in the context of this sci-fi environment.

I really liked the characters in this movie. Lead character Atsuko Chiba is a cold woman who’s very introverted, but has trouble with being self-righteous and needing to control everything she does. In contrast to her is Paprika who is this perky and extroverted counterpart to Atsuko in these dreams. She also has flaws with being too flirty and even coercive at times, but she does call out Atsuko on her shortcomings which was needed. Megumi Hayashibara deserves major props for playing both characters. Unless you’ve heard her other work, the average person would think this was two people talking with Atsuko’s no-nonsense alto compared to Paprika’s bubbly soprano voice. Kosaku Tokita is this man-child genius who’s the main person who invented the DC Mini. He can be immature, but he has a scientific vocabulary that could make a Ph.D graduate take pause whenever he talks about inventions. I also like the friendship that Dr. Tokita and Dr. Chiba shared. I did dock his character a bit by being a glutton which can be pure fat shaming fodder. He makes Majin Buu look skinny by comparison. One ensemble dark horse character was Inspector Toshimi Konakawa. He’s investigating the crimes committed with whoever took the DC Mini, but I was enthralled by his character and backstory. Konakawa tends to avoid movies and not talking about them, but that art form has a psychological effect in a recurring image of him seeing someone murdered as both the victim and him are floating around in a hotel hallway.

Speaking of that scene, the floating hotel hallway scene should sound familiar. So we have this movie that plays with the psyche with a machine that allows people to go inside dreams, having both the real and dream worlds become intertwined, crimes committed with said machine, and the concept of people having multi-layered dreams comes up.

Does ANY of this remind you of a certain movie involving dreams?!?

Strike Paprika on my list of reviewing “stuff from Japan that Hollywood steals from.” Let’s break it down, everyone. Paprika was first written as a novel in 1993 and animated in 2006. Inception wasn’t released until 2010. It gets harsh because remember how I said that Satoshi Kon is dead? He died the SAME YEAR Inception came out. Ouch.

Both screenplays aren’t exactly alike despite the major plot device of traveling inside the subconscious mind. The most obvious would be the respective main characters being a female psychiatrist as opposed to Leonardo DiCaprio’s character from Inception being a con artist. Yes, crime plays a major role, but Chiba/Paprika and Cobb would be on opposite sides of the same coin given that the police (okay, mainly Konakawa) helps her out. There’s the concept of planting ideas, but in Paprika’s case it involves mass delusion which can lead to an epidemic of psychosis through shared dreaming.

With that being said, Christopher Nolan should really know better. He’s made official authorized remakes before such as his version of the Norwegian film Insomnia. The dream concepts are so alike, it’s not even funny. There are identical scenes like the hotel hallway and the famous scene of Paprika reaching her hand to a crumbling environment that shatters in front of her which Ellen Page’s character duplicates. Just because Nolan has made The Dark Knight Trilogy and Memento doesn’t give him a free pass to make a movie similar to Satoshi Kon’s work without paying royalties or at the very least acknowledging inspiration from Kon’s movie. Shoot, this wouldn’t be the first time I’d talk about a movie accused of ripping off anime from a dead animator and would be scored by Hans Zimmer. There’s a reason why Paprika is mentioned in lists involving movies that were ripped off. Not only that, but German filmmaker Wolfgang Peterson had the filming rights to Paprika for years and was going to make a live-action remake, but he probably won’t because of Christopher Nolan’s movie and for any mainstream movie fan believing that this is plagiarizing Inception.

I hate to repeat one of my points from my Kimba the White Lion review, but this bears repeating. If the situation was reversed where Inception predated Paprika, then you know that everyone would riot and mock the latter movie until kingdom come. I’ll even go one step further and say that if it’s okay for Christopher Nolan or anyone who looks like him to steal from other movies and not a Japanese guy like Satoshi Kon, then you’re a hypocrite and your mental heath should be questioned on whether you really have prejudices against other ethnic groups.

Okay, my rant is over. Let’s go to the review again.

The music was certainly trippy. The score does work with the psychedelic environment, but it also sounds more normal for the quieter scenes. It gets avant-garde in places with some pink noise and various soundscapes that really sound foreign. I also found out that this was one of the first film scores to use vocaloids. At first, I thought it was a singer drowned out in Auto-Tune, but that was literally a computer singing in some of the vocal tracks like the theme song and the parade suite. While I wasn’t a fan of the vocaloids, I thought the instrumentation was great.

Paprika does have some flaws though. I thought there were times when it got too weird or too disturbing for me. There’s a sexual assault scene which gets extremely creepy in the dreamworld where one character simultaneously tries to kill Paprika as she’s on a bed with needles like a pinned butterfly. I also thought one element of the final fight scene was just too bizarre as Atsuko tries to save the day. There were some mind-screw elements I could handle, but there were times where I didn’t know if reality was coalesced with a dream or not unless it became more obvious later on. The mass delusion scenes may be funny at first until disturbing stuff happens like a row of people are committing suicide while smiling and synchronized diving off a building. That could trigger people who’ve dealt with that issue or know people who have. The mass psychosis certainly escalates from talking about frogs leading parades or 24-bit eggplants to the destruction of the city as dreams collide with the real world thanks to the DC Mini in the wrong hands.

The final film from Satoshi Kon is totally worth your time. It’s a bizarre, yet deep movie dealing with the human psyche and if some aspects of humanity should be analyzed with technology. The production values are immaculate with the innovative animation still being impressive to this day. The characters all have quirky personalities and the Japanese voice acting is top-notch. There are times when they overdo the weirdness and disturbing imagery, but it’s few and far in between. I know some Inception fans may balk at this movie for not being like Nolan’s filming style, but even they should give it a shot. I don’t think this is Kon’s best movie, but it’s certainly better than most anime films I’ve seen. Definitely recommended.

Cons:
-Some plot holes
-Overdoing weird elements
-Over-reliance on vocaloids in the soundtrack

Content Warning: This is rated R, which I do agree with. It may not be as graphic as Perfect Blue, but Paprika has it’s moments. The violence gets intense with both realistic and fantastical ways like people getting shot, slashed, but some characters also get eaten, too. There’s some nudity with Atsuko/Paprika and a sexual assault scene where a character slips his hand inside her body before cutting her open with said hand in the dreamworld. Definitely for older audiences.