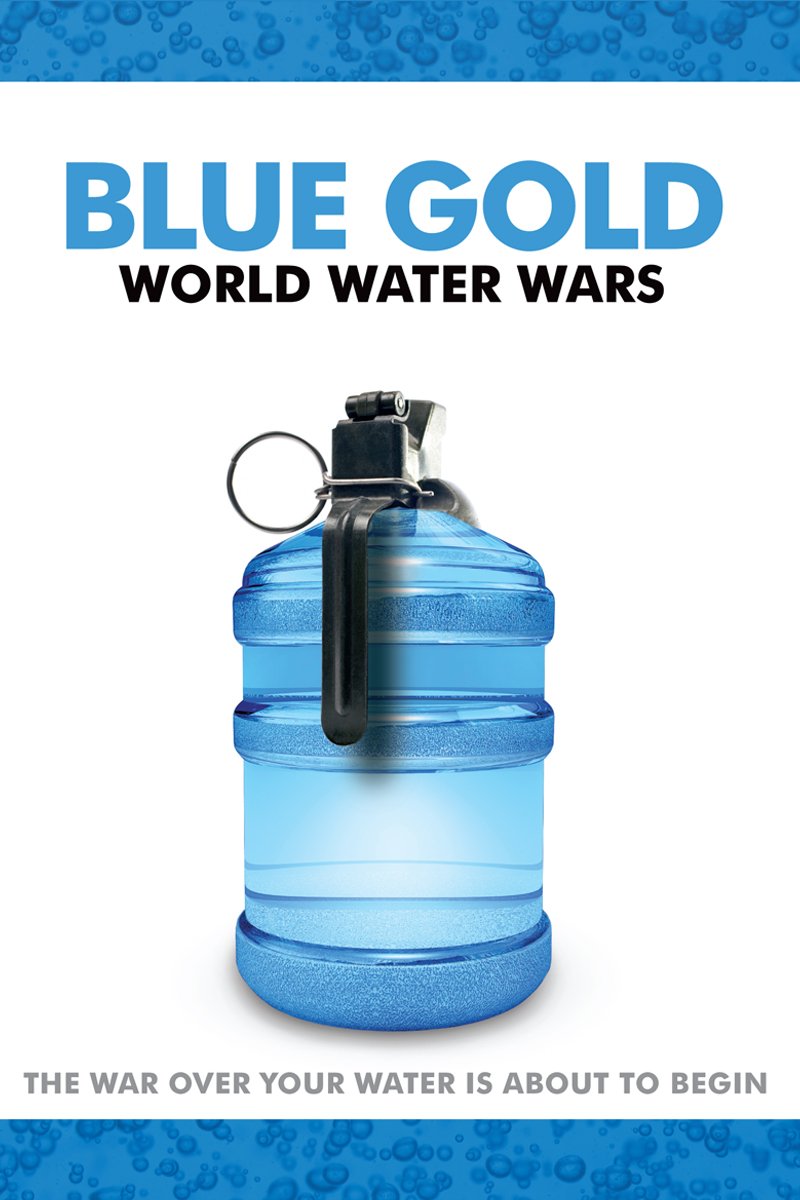 AKA: Blue Gold: World Water Wars
Genre: Environmental Documentary
Year Released: 2008
Distributor: PBS
Origin: USA/Canada
Running Time: 89 minutes
Rating/Recommended Audience: 13+
Related Films/Series: N/A
For Fans Of: The Corporation, Trashed, Black Gold, The Big One, Food Inc.
Notes: N/A
Fun Facts:
-Blue Gold was based on the book of the same name by Canadian authors Maude Barlow and Tony Clarke. Both of them even show up in this documentary.

-This was narrated by actor Malcolm McDowell. Does that name sound familiar? That’s the same guy who played Alex from A Clockwork Orange, my fellow droog. What’s up with British actors famous for playing devious characters showing up in these environmental documentaries ever since reviewing Trashed? Hahaha!

-Blue Gold was co-produced by filmmaker Mark Achbar who is also famous for his work with the documentary The Corporation.  -Canadian activist Ryan Hreljac who is featured in this film is famous for his program Ryan’s Well which creates well in developing nations. As of 2015, he dug over 1000 wells through this program.

Water is something that everything and everyone needs. That’s not even up for debate. Unfortunately through pollution, scarcity, and mass commercialization, the biggest source of life on this big blue planet has caused a plausible situation for future generations. Water can become so scarce and so privatized that people would be willing to fight for the right to drink or bathe in it. Keep in mind that 97% of the earth’s water is saltwater and the remainder is fresh. That’s not even getting into semantics on whether said freshwater is even suitable for human consumption. It’s becoming a big issue that can affect anyone and some of these conflicts have happened in many of our lifetimes.

Blue Gold is a documentary that deals with water as a human right and how devious factors can affect others. There’s a collection of interviews with activists, water technicians, politicians, businessmen, and even everyday people about how the water situation is going in their home countries. This film documents the scientific aspects of water and how it can help others or how it can hurt those when misused. There are even classist issues as huge corporations hike up the price of the beloved H20, particularly in poorer nations, or even exploit resources such as the Great Lakes right here in the American Midwest. There are conversations, studies, observations, stories, and even potential solutions that are brought up throughout the course of the film.

There were several issues in this movie that I never thought about when it came to how water has been used and abused. Blue Gold was certainly informative in this regard. Some parts I knew, but some parts were completely new to me. It was also heartwarming seeing some activists taking on major corporations and in some cases actually winning. That was inspiring seeing people making a positive difference despite some of the tough battles going on. There was Ryan’s Well which has a very inspiring story of Ryan Hreljac wanting to help other nations by making wells ever since he was a little kid. He was misinformed that making a well would cost only $70 only to find out it would be much more expensive and that drove him to save even more money to make a difference. That was certainly a highlight. I’d also be remiss if I didn’t mention the Cochabamba protests in Bolivia. Yes, I know I talked about it as it’s been mentioned in The Corporation, but it needed to be said since this is the first thing that came to mind when it came to water conflicts. It was an all-out war by Bechtel against the people of Bolivia. One thing I never realized the first time hearing about this was the fact that Bolivian soldiers and cops were attacking their own people on behalf of Bechtel. This was like a form of dividing and conquering by the corporate elites to fight their own wars much like other events in history. That nuance makes me really think about the Cochabamba protests in a new way.

Blue Gold had positive traits, but some parts did turn me off. There was cheesy aged CGI with the planet scenes that hampered the visuals at large. I thought it was too distracting despite some of the serious matters and it also applies to the whiteboard scenes that act as a projector for other events with water crises going on. While there were some basic solutions that were doable and cost-effective, I did question some of the practices of some of them. Michael McDowell did a good job narrating, but I never felt like it was an issue he cared about. Say what you will about I Am Not Your Negro or Trashed using big-name actors heavily involved, but with those documentaries, I totally believed that Samuel L. Jackson and Jeremy Irons respectively had a passion for those issues presented in those two films. The biggest flaw in Blue Gold would be the narratives that give way to White Man’s Burden/White Savior undertones. Now, I’m not bashing the efforts of several of these activists shown, but I thought it was condescending when all the scenes dealing with poverty coincided with the most impoverished parts of Kenya, Ghana, and South Africa. The feel-good moments involved the Caucasian activists from all over the world looking like superheroes by helping those communities and in the case of one of the Cochabamba activists, letting them speak at Washington D. C. This rubbed me the wrong way and they could have shown more POCs in foreign nations actively making a difference and showing it.

This was a good documentary showing the possibilities of water politics and activism, but it still had flaws. I do want to become better at making sure people in the future don’t end up in a situation reminiscent of Mad Max, Fist of the North Star, or Now and Then Here and There where people are constantly fighting just for the right to drink. There were some great stories and I’m glad some of the corporations have been exposed for their wrongdoings, but people still have a long way to go. I wasn’t a fan of how they slanted some of the activists when dealing with third-world situations as it made the inhabitants look helpless in their horrific situations. Blue Gold was a decent watch, but I’ve seen better works involving activism or the environment at large.

Content Warning: It’s safe for teens and up to watch this documentary. The opening reenactment was disturbing as it deals with a man who died of thirst after not having water for a whole week. There’s some blood and gore during the Cochabamba protests including a scene where you see a teenage boy’s bloody corpse in the archived footage.