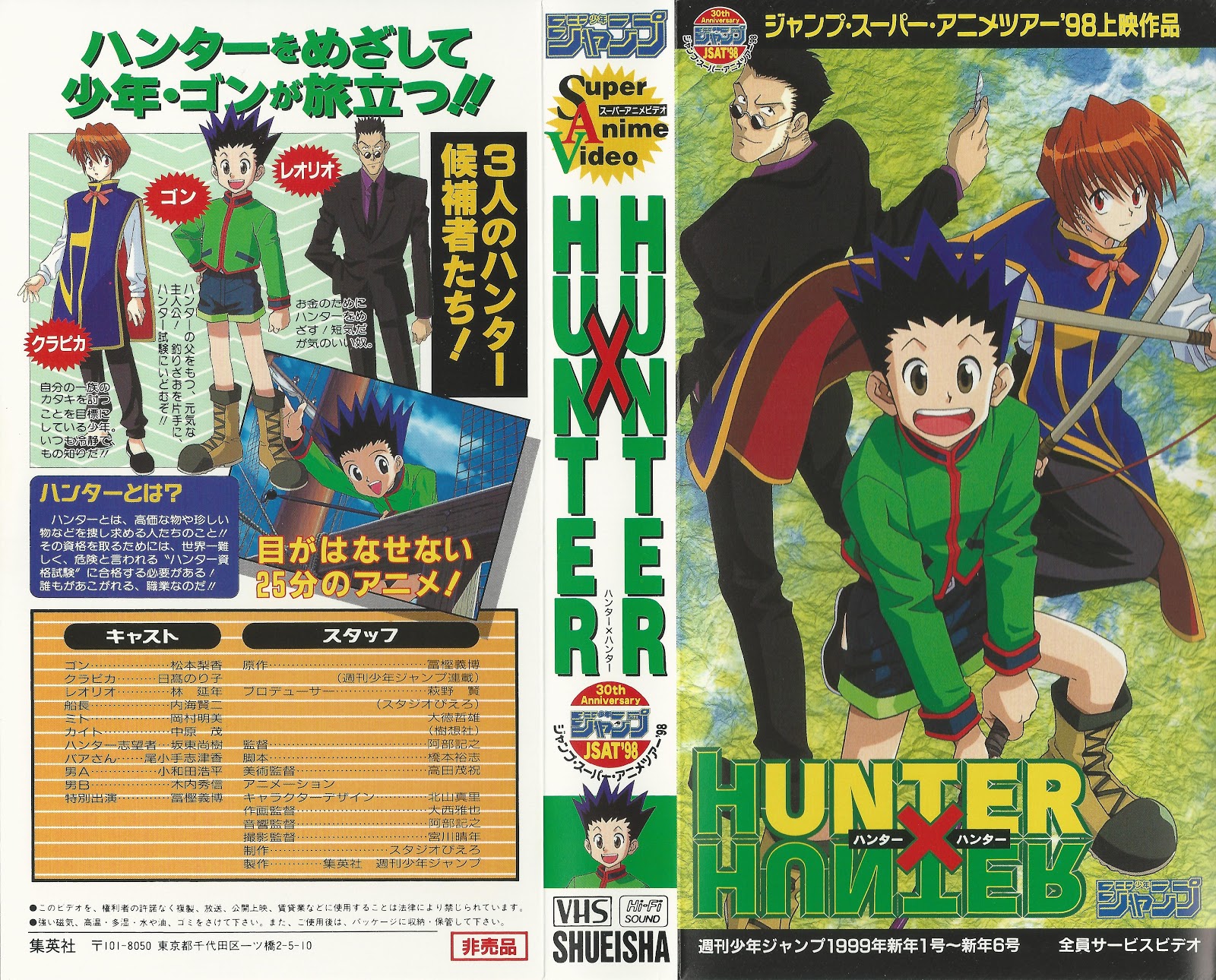 -This OVA was also a pilot episode and is a condensed, yet altered version of the first two episodes or chapters if you’ve read the manga. There’s no need to watch other adaptations to know what’s going on although both the original 1999 TV series and the 2011 series go much farther.

-The voice actors in this OVA are completely different than those in both TV series. Get used to hearing different voices for the main and secondary characters.
Fun Facts:
-Hunter X Hunter was created by Yoshihiro Togashi who is well known for his work on Yu Yu Hakusho. Also, he’s married to Naoko Takeuchi who is the creator of Sailor Moon.

-This is the first animated adaptation of Hunter X Hunter ever which came out the same year the manga was serialized and a year before the first TV series was created.

-Hilarious in Hindsight: Get ready, Iridium Eye viewers. This is going to be a six degrees of Shonen Jump observation. This OVA was directed by Noriyuki Abe (no relation to Yoshitoshi) and animated by Studio Pierrot. Noriyuki Abe has directed several Shonen Jump series starting with Yu Yu Hakusho which as mentioned before is from the same creator of Hunter X Hunter. His next big work was the ninja anime Ninku which features Rika Matsumoto playing the main character Fusuke and is technically the first voice actress playing Gon Freeccs in HXH. What anime was inspired by Ninku and would be animated by Pierrot as well? Naruto! The title character was played by Junko Takeuchi who played Gon in the 1999 series and subsequent OVAs. Norityuki Abe would direct Boruto which is the sequel to Naruto as it deals with the title character’s son. That same director and same studio would also be responsible for directing another big anime from the 00s by the name of Bleach. That is one of the longest running anime series out there, but certainly not as long as One Piece for example. Oh yeah, Akemi Okamura plays Mito in this iteration of Hunter X Hunter and she’s best known for playing Nami in One Piece in addition to doing voice work going back to Ninku. WHOOO! That was fun.

-This OVA was part of a commemorative event for Shonen Jump celebrating it’s 30th anniversary.

You know what? I was severely lacking in the Shonen Jump department when it came to reviewing anime despite not being what I focused on since it’s popular and all.   Before I get to the review proper, I need to have my anime hipster moment. Hunter X Hunter is something I’ve known about for over a decade. I remember reading a review about the original series at THEM Anime and I started watching the series during my teenage years. I was enthralled by how many Shonen Jump tropes were subverted and toyed with. I even remember buying the first English translated volume the day it was released in America at my local Suncoast store. Even the cashier followed that series and wished more people knew about it. Granted, the original anime series never went past the Greed Island arc in the latter OVAs. All I have to say to some anime fans is: “Where were you when this came out?”. I never heard anything about anyone talking about Hunter X Hunter besides the fansub community back in the day, and now ever since Madhouse remade it, everybody seems to gush about it. There are people I’ve met in real life who didn’t even know that it was animated since the late 90s. To my surprise, I didn’t even know that there was something that predated the original TV series and I thought I was knowledgeable about 90s and 00s anime.

I apologize if I came off as stuck-up or a know-it-all. This was all based on real life with some facetious behavior thrown in. This is nothing against those who only know about the 2011 remake. We’re cool now? Alright. On to the review proper.

For those of you that don’t know about Hunter X Hunter, this OVA can act as an intro albeit a different one to later adaptations. Hunter X Hunter takes place in an alternate earth where there are people called Hunters who get to find treasure, go on secret missions, find wild animals, and other adventures of daring do. There’s an annual test that’s rigorous to say the least in order to be certified for this illustrious job. One boy who longs to be a Hunter is Gon Freeccs. He lives in a coastal town on Whale Island where he lives with his Aunt Mito, fishes, and befriends some wild animals. He wants to be a Hunter not just to better himself, but also to find his father Ging who is actually alive somewhere in this world. Gon goes off to take the Hunter exam far away from Whale Island, but there are certainly some troubles ahead of him.

Let’s start with the animation. In a way I was surprised, yet not surprised that Pierrot would handle this. I was surprised because the animation was more fluid than I expected from a 90s Pierrot release with the action scenes being somewhat impressive for it’s time. I wasn’t surprised because Pierrot has adapted tons of Shonen Jump properties and they’ve animated more manga than what I mentioned in that Hilarious in Hindsight Fun Fact above. Granted, I did have to get used to these character designs. Gon was okay even though he looked taller and slightly older than what I’ve seen in the manga, 1999 series, or the few clips I’ve seen of the 2011 remake. Now, because it’s a Pierrot release, don’t expect to see anything that would impress Studio Ghibli. It’s serviceable, but I’ve seen better animation from series in that decade including from that aforementioned studio (Key the Metal Idol, anyone?).

Watching this take on Gon’s first big adventure was certainly different than my experience of the original TV series or the manga. They got the basic parts right like him wanting to find his lost father, adopting the foxbear cub, and the backstory with the veteran Hunter Kite, but some things were different. Mito is an alcoholic in this iteration which shocked me, but it made sense to her character especially given her relation to Gon’s dead mom and missing father. Gon also meets up with Leorio and Kurapika much earlier since they needed to have some of the other main heroes there (sorry Killua fans. He’s not there). The first big part of the test they go through was certainly action-packed and nothing like what I’ve seen in my Hunter X Hunter experience. I also noticed that Leorio was way more impressive as a fighter by having a competitive brawl against Kurapika and being able to do all these flips and kicks to anyone which was a positive surprise.

Seeing this pilot OVA of Hunter X Hunter was fun, but I couldn’t ignore some of the flaws. The pacing was way too rushed especially with the character dynamics between Gon and Mito. Say what you will about the 1999 series, but at least they spent a good amount of time establishing Mito’s situation of being not just Gon’s aunt, but also his mother figure and guardian very early on in that series (that’s saying nothing about the animation used during the first ending theme “Kaze no Uta”). They just blew past that in barely ten minutes. Even though I found Leorio’s combat skills to be more impressive this go around, I found him to be a bigger jerk than in other versions of his character. When he’s arguing with Kurapika, he threatens to end his bloodline which I thought was way too cruel for him even on his bad days. Would anyone blame Kurapika for wanting to slice Leorio to ribbons considering the fact that he’s the sole survivor of a genocide? I also found the music to be quite generic all around and it has nothing on the 1999 series. Remember how I said that Pierrot animated this? Yeah, some of their worst traits showed up there. Some scenes have little movement that just looked laughable. Some scenery just looked flat and the foxbears were lacking in detail or personality. The characters did get off-model at times with one scene making Kurapika looking like a Rule 63 version of a character from Air, Clannad, or Kanon with those huge eyes. I also wasn’t a fan of Leorio or Kurapika’s voice actors. Leorio sounded too snide and Kurapika sounded way more effeminate than he should be (Yuka Imai is the REAL Kurapika, darn it!). If this ended up being a “real” first episode to anything Hunter X Hunter related, it would still be entertaining, but lacking in depth like to what the whole series is about.

The Hunter X Hunter 1998 OVA was a fun, yet mindless watch. It was interesting seeing the history of this anime franchise before anything became adapted into a TV show. I thought the good parts in the animation were done well, but the worst parts did rear their ugly head as I’ve seen in other Pierrot productions. While this adaptation to the first couple of chapters of the manga could’ve been disastrous, the production did their best to make it serviceable should they pitch it to a network despite Nippon Animation and Madhouse doing better animation work in their respective adaptations. I did have issues with the timing and the off-model moments. This pilot OVA is interesting to watch from a historical perspective of Yoshihiro Togashi’s masterwork, and I could see fans and non-fans wanting to see where this all came from.

Content Warning: This is one of the tamer Hunter X Hunter works, but it would still be teens and up when it comes to an appropriate audience. There’s some language thrown in and the fighting does get a bit bloody and some characters get eaten by sea monsters. One act of violence that is hard to watch is Kite punching Gon since Kite is an adult and Gon is only a boy. Mito certainly hits the bottle in this OVA and ends up walking drunk after yelling at Gon. There’s a bizarre scene with jellyfish attaching themselves to the ship’s crew and it makes them horny under their poison. Leorio casually mentions that he almost got hit on by a guy while they were under their control, so that was weird to watch.