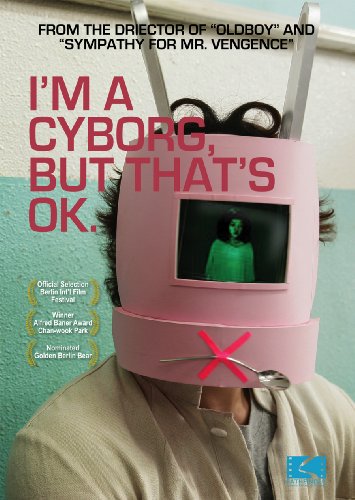 AKA: Ssaibogeujiman Gwaenchanha
Genre: Dark Comedy/Romance/Psychological Drama
Year Released: 2006
Distributor: Pathfinder Home Entertainment
Origin: South Korea
Running Time: 107 minutes
Rating/Recommended Audience: 17+
Related Films/Series: N/A
For Fans Of: Welcome to the NHK, Ben X, Amelie, Wrinkles, A Beautiful Mind, He Died With A Falafel In His Hands, The Rage In Placid Lake
Notes:
-Characters and cast members will be named under Western customs of the family name coming last and the given name coming first.
Fun Facts:
-I’m a Cyborg was directed by Chan-wook Park. He’s most known for his film Oldboy.

-The kleptomaniac Il-soon is played by K-pop singer Rain. This wouldn’t be his only time in film since he would eventually make an appearance in the American live action remake of Speed Racer.

-Hilarious in Hindsight: During Young-goon’s hallucinations of her slaughtering the mental ward, her fingertips come off to reveal guns on the inside in her dreams. Wow, looks like someone’s been watching Hunter X Hunter as her delusional gun massacre seems to be suspiciously like Franklin’s nen abilities in the Phantom Troupe.

I’ve covered several Asian films in Iridium Eye and that’s not even getting into the myriad of anime I’ve watched since starting this blog. However, one country that was missing on the list of Asian cinema was South Korea. I feel bad not covering any Korean films sooner. That country has a big film scene and a huge music scene where even Americans know about some K-pop or K-hop even before Gangnam Style by Psy became a huge international hit. What better way than to check out the filmography of Chan-wook Park as he deals with a very quirky rom-com that takes places in a mental institution.

I’m a Cyborg, But That’s OK deals with a mental patient by the name of Young-goon Cha. She gets committed after she slits her wrists during her shift at a radio factory before connecting a cord to said wrist causing her to electrocute herself. She wasn’t trying to end her life though. In reality, Young-goon legitimately believes that she’s a cyborg that needed some recharging. As she believes that she’s a cyborg, she talks to lights and other mechanical things, but the most disturbing thing about her is that she foregoes food for fear of malfunctioning in her delusional mechanical frame. Instead, she licks batteries for nutrition and “recharges” by listening to educational broadcasts on her beloved radio. Young-goon is among a bunch of other patients who have their own severe mental issues, but one man named Il-soon Park takes notice of her. Granted, he has his own issues by being anti-social, a severe kleptomaniac, is schizophrenic, and always wears some paper masks resembling robotic bunnies (no, really). Even though he takes advantage of the other patients by stealing their things and “transferring” other people’s personality traits while incorporating them himself before giving them back to their owners, he wants to help Young-goon and he realizes that she’s dying by not eating.

This was certainly a strange watch although I’ve seen much weirder movies. The film flips between reality and delusions so many times particularly with Young-goon’s condition. She believes that she’s a cyborg, so in her mind, her skeleton is nothing but gears and her toes light in all the colors of the rainbow to show her battery status. Other delusions are seen from the rest of the ward such as believing they are singing in the Alps almost like they’re in a scene from The Sound of Music, or believing they can fly by rubbing their socks together via static electricity, or thinking that a cat can be a potential wife for one person. These worldviews become so surreal and disturbing, but the visual presentation nails that awkwardness and insanity that many of the characters convey. I will admit that there were some funny parts such as Il-soon having another patient’s reckless politeness while walking backward as he smiles in a closeup. There’s even one scene despite the dark nature of it involves Young-goon singing a parody of “Silent Night”, but the lyrics are about rice and noodles instead. One brief exchange that I thought was unintentionally funnier than what it should be involves the singing patient wanting Il-soon to steal these “sleep flying” socks from the depressed gluttonous patient Gop-dahn, while Gop-dahn wants the other girl’s voice. Gop-dahn, you aren’t the first overweight woman to want someone elses voice. I’m just saying. The imagery does work more often than not and I also liked how the leads do develop since I wanted Il-soon to succeed in helping Young-goon despite his many flaws.

While I’m a Cyborg, But That’s OK has some off-kilter things about it that kept me interested in seeing how this film played out, I didn’t think this darkly comedic romance worked that well at large. Much like the Belgian/Dutch film Ben X that I reviewed in the early stages of iridium Eye, I loathed the presentation of mental illnesses. It portrays most of the mental conditions as just wacky which I found to be insulting. Sure, I do give credit to the filmmakers for showing that Young-goon’s psychosomatic eating disorder due to her believing that she’s a robot is a horrific thing, but I wasn’t a fan of everything else though. Many of the characters have real disorders. Schizophrenia is brought up with Il-soon and Young-goon’s grandmother. The latter’s condition (in addition to developing Alzhiemer’s) allows her to believe that she’s a mouse while adopting other mice as her children and only eating radishes. I get that they were giving Young-goon a sympathetic backstory as she treated her grandmother with more respect than the rest of her family, but I found the portrayal of schizophrenia to be very unrealistic. I’ve met people in real life who have that condition and they certainly didn’t act like those characters even on their worst days. That’s a sharp contrast from Wrinkles since it dealt with mental issues (albeit in the context of nursing home orderlies) in a much more believable fashion and that was an animated film of all things. On another note, there was some aged CGI used for some of the delusion scenes like the ladybug where Young-goon believes she’s shrinking in order to escape her padded cell. I also thought the ending could’ve been handled better. There is a positive aspect that really shows how far Il-soon has come in being empathetic, but it just ends abruptly with barely any closure.

I’m a Cyborg, But That’s OK had an interesting concept, but I had a hard time getting into the whole movie. I thought the dark humor was a miss more often than not despite being able to “get” the humor portrayed in foreign cultures. There was some good acting in it with several characters, but I thought the portrayal of mental illnesses as a joke was just atrocious. There is some great filming and editing despite the occasional dip in quality whenever CGI was used. I’m a Cyborg, But That’s OK was an overrated film that tried way too hard to be strange while also undermining mental issues despite any good intentions used.

Cons:
-Mental illnesses being treated as comedic fodder
-Aged CGI at times
-The humor is too callous

Content Warning: I’m a Cyborg, But That’s OK may look like some random funny movie, but this one is for older audiences only. The mental conditions portrayed do have some distressing implications with the big one being Young-goon’s body deteriorating to the point where she could die in three days if she has no food. The cyborg murder hallucination is incredibly bloody despite it being Young-goon’s imagination. It certainly gets to Takashi Miike-levels of gore in those scenes. There’s some very strong language in a few parts and some questionable dialogue including two instances of bestiality jokes. The ending does have a sex scene, but it’s shown at a great distance though.