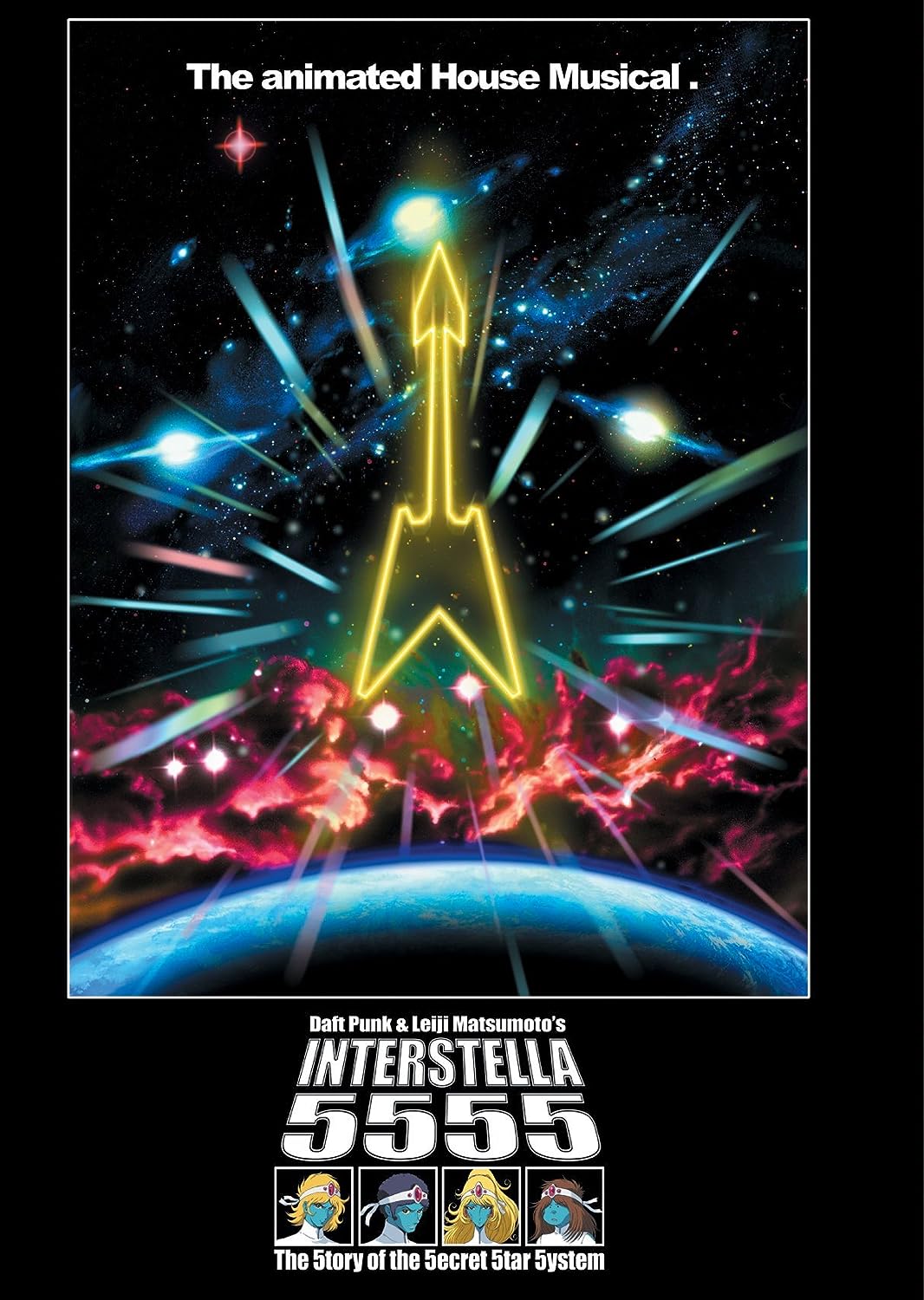 AKA: Interstella 5555: The 5tory of the 5ecret 5tar 5ystem
Genre: Musical/Sci-Fi/Adventure
Year Released: 2003
Distributor: EMI/Virgin/Parlophone
Origin: France/Japan
Running Time: 65 minutes
Rating/Recommended Audience: PG
Related Films/Series: N/A
For Fans Of: Electroma, The Wall, Space Battleship Yamato/Star Blazers, Treasure Planet, Macross
Notes:
-The name of the movie is pronounced “Interstella Four-Five”. Not “Five-Five-Five-Five”.
Fun Facts:
-Two huge names in anime were involved in Interstella 5555. The most obvious one is Leiji Matsumoto providing the character designs. He’s well known for his work for the Yamato series AKA Star Blazers, Captain Harlock, Galaxy Express 999, and Queen Emeraldas. One of the co-directors is Daisuke Nishio. He directed this one anime series that you might have heard of. Nishio directed a tiny little anime called Dragon Ball Z. I can’t even make this up.

-Fandom Bonus: Hey Matsumoto fans! Doesn’t Baryl look like a younger alien version of Tochiro to you? Also, Baryl while under disguise is cosplaying as Captain Harlock when he tries to rescue Stella.

-Musician Bonus: Two of the Crescendolls have names that are music puns. The guitarist is Arpegius and the lead singer/keyboardist’s name is Octave.

-Coincidentally, Interstella 5555 was released on the tenth anniversary of Daft Punk existing as a band.

-Before Guy-Manuel de Homem-Christo and Thomas Bangalter would don their iconic robot helmets, they used to be in a punk band called Darlin’ alongside Laurent Brancowitz who would eventually be the guitarist/keyboardist for Phoenix after this band broke up. When Darlin’s first album was reviewed by Melody Maker, they were described as a “daft punky thrash”. Those critics are wishing they could eat those words because guess how Guy-Manuel and Thomas got the name of their band. Talk about profiting off an insult.

It’s been a long time since I last reviewed something from Leiji Matsumoto. For some reason, I never had the chance to see this animated musical besides the “One More Time” music video that I saw as a kid. Some friends of mine told me to check this out including some that weren’t hardcore fans of the iconic French electronic duo Daft Punk. It was something I wanted to see for the longest time, but I had to stop putting this off.

One can say that I finally got lucky enough to watch this film. Yes, that pun was intended.

Interstella 5555 is an anime companion piece to Daft Punk’s renowned sophomore album Discovery. The plot that coincides with that album involves a group of blue skinned aliens. It starts with them playing a concert in their home planet while so many of their kind is dancing and singing along to their song “One More Time”. After the song ends, some masked men gas the crowd and abduct the extraterrestrial quartet while transporting them across space to planet Earth. Their memories are manipulated and they are painted to look like humans to perform here under the name The Crescendolls. The person behind this kidnapping is the music mogul Earl de Darkwood who gives them tons of fame on Earth while one of their blue-skinned compatriots Shep tries to save them. There are secrets behind Darkwood as he uses The Crescendolls for part of an evil plan to conquer the universe.

Let’s start with the music first. It’s been years since I’ve listened to Discovery from front to back, but this film was a great refresher with some great visuals to boot. Daft Punk certainly know how to make some quality dance music and I enjoyed their take on electronic music while mixing some house, funk, disco, and a hint of rock in some of the songs. The movie kicks off with “One More Time” which is the most famous song from Discovery. That is a fun song to groove to as it mixed 70s and early 00s music together and it was a great opener to the album and the movie. The other big song that everybody knows about whether they know it or not is “Harder, Better, Faster, Stronger.” Yes, this is the same song that Kanye West sampled in the song “Stronger”. It’s got a great beat and has some creative production behind it. However, watching the movie re-contextualized that number into something much darker. That song plays while the aliens are becoming human against their own will and one could argue that the robotic vocals from “Harder, Better, Faster, Stronger” are from the perspective of the machines operating on The Crescendolls. Wait a minute, so this famous house song was used to make some characters human while the villain exploits their voices for a sinister motive? That’s a villainous correlation if you really think about it. The rest of the music certainly fits the mood of Interstella 5555 quite well with a great mix of tempi and moods. Interestingly enough, the only dialogue spoken comes from the lyrics to the vocal tracks which I thought was a nice choice.

The animation was certainly better expected given who was responsible for animating it. Interstella was produced by Toei Animation who I find to be extremely overrated. I know, they’ve animated some very well-known series such as the Dragon Ball franchise, Sailor Moon, and One Piece to name a few, but they don’t hold a candle to other studios in terms of animation quality such as Madhouse, Production I. G. or even Kyoto Animation. Let me put it this way, Toei is like the Hanna-Barbera of Japan. Both studios have worked on projects that everybody knows, but their animation quality isn’t always the best. With Interstella 5555, I will say this is one of their better projects from a visual perspective. The alien planet looks amazing with Leiji Matsumoto’s knack for retro futurism. The coloration is certainly superb and there’s plenty of fluidity to make everything work. sure there were a couple of choppy spots and one CGI tower was incredibly dated, but the movie has more positives than negatives in the production department. As much as I have some issues with Toei, I will admit that they can make some visually appealing stuff when they really try.

Interstella 5555 does have some problems of it’s own though. Going back to the animation, some of the CGI gets dated like one aforementioned tower and a turntable that’s in the ending of the film. Some other stuff was dated like the usage of VHS tapes and floppy disks. Maybe they didn’t have enough random access memory to handle newer technology (see what I did there?). The whole subplot of Earl de Darkwood (obvious villain name is obvious) of conquering the whole universe through music was tacky even if it had some creativity used in it. One scene was also hard to watch such as Octave trying to get the disks from Darkwood’s record label. He gets tazed by the cops despite being unarmed and the fact that Octave’s human form resembles an African-American makes the situation worse in hindsight given the police brutality issue going on in America. I know I’m going to get some crap for saying this, but I have to mention some of my musical tastes here. Daft Punk are great beatmakers and musicians, but one thing that got on my nerves was the rampant usage of Auto-Tune in several of the vocal tracks. The usage of it grated on me overtime and the fact that this was early 00s Auto-Tune makes the pitch correction painfully obvious even to those who don’t know about music production and the effects therein are also quite dated. There’s also the ending which can easily be seen as a cop-out which I won’t spoil, but the signs are there without having to pay close attention. I also think that Daft Punk fans would really get a kick of this movie, but casual fans may not appreciate Interstella as much.

This sci-fi musical was certainly fun to watch nonetheless. I liked how the elements from the Discovery album translated into an animated context. The plot is easy to follow despite some of the surreal imagery and some tacky moments. The music is certainly great although I wish they would cut back on the Auto-Tune for many of the vocal moments. The production holds up despite some spotty CGI here and there. If you want an atypical sung-through musical, then you’d get a kick out of Interstella 5555.

Pros:
-Coalescence of the Discovery album and the visuals
-Balances artistic and straightforward elements
-Great character designs from Matsumoto

Cons:
-Dated elements like some CGI and props
-Cheesy villain and his motivations
-Overabundance of Auto-Tuned vocals

Content Warning: Interstella 5555 is a tame movie even though there are some disturbing elements to some parts. There are some character deaths such a scene that strongly implies human sacrifice including children if one pays attention to Darkwood’s backstory. During the “Harder, Better, Faster, Stronger” segment, The Crescendolls are in their undergarments as they are being humanized, but it’s not played for fanservice. Besides that, there wasn’t anything too major about this film.