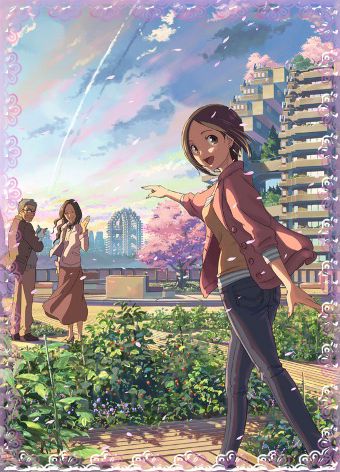 AKA: Someone’s Gaze
Genre: Slice-of-life/Sci-Fi/Drama
Year Released: 2013
Distributor: Unlicensed
Origin: Japan
Running Time: 7 minutes
Rating/Recommended Audience: G
Related Films/Series: N/A
For Fans Of: She and Her Cat, 5 Centimeters Per Second
Notes: N/A
Fun Facts:
-Dareka no Manazashi was created with help from the Nomura Real Estate Group and it was promoted to spotlight some homes in the Tokyo area. Imagine if someone like Re/max or Century 21 decided to bankroll an animated short film over here.

-This is the 2nd Makoto Shinkai production that involved Satomi Hanamura who voices the main character Aya. She was previously in 5 Centimeters Per Second as Kanae.

-Speaking of voice actresses, the narrator is played by Fumi Hirano who’s best known for playing Lum Invader from the Urusei Yatsura series.

I must be on a roll by covering several of Makoto Shinkai’s works. Maybe it was my former otaku self pining for more of his work especially as I checked out things from his later filmography. I didn’t realize he made a very short film much like his debut work She and Her Cat.

Dareka no Manazashi takes place in the near future where a young woman named Aya Okamura gets her own place quite recently. She recently got a job away from her home, but Aya had issues at her job as her boss yelled at her. The home life of the Okamura’s had plenty of distance. Her father still lives at the old house with their aging cat Mii while his wife works overseas. Despite Aya’s independence, she still longs to visit home and to see her family reunite for once.

Shinkai, you really know how to hit people in the feels in several of your movies. That emotional edge certainly continues the trend here. The situation presented is quite relatable despite some of the futuristic technology present (which looks unintentionally more high tech than Voices of a Distant Star despite presumably taking place before that short film). I know everybody has experienced that one bad day at work where the boss gives someone crap. Trust me, I’ve been there in previous jobs. The theme of distance is another trademark Shinkai trope. There’s Aya who’s away from the family home while her mom is away in another country due to her job. I wanted to see this family get together at the end for a brief reunion despite the very short run time. I also thought the ambiguous narrator was an interesting touch. I thought it was supposed to be the mom at first until the plot threw me for a loop as to who it really was. That was a nice plot twist there.

Dareka no Manazashi is typical Shinkai fare, but not everything was brilliant. While the animation looked crisp and the scenery was great, I thought there were too many shortcuts taken in the animation department. There were way too many still shots for a film this short. I know Comix Wave is better than this and as much as I found The Garden of Words to be extremely overrated, no one can argue that the animation was a quantum leap better than this. I also wished that there was an extra few minutes. Dareka no Manazashi could’ve been better had this have been twice it’s length where one can expand on the family’s relationship (particularly the mom) or see some of the details at the characters’ jobs instead of just flying right by it with numerous stills and exposition. I was also underwhelmed by the music. It wasn’t bad per se, but I would’ve liked to have heard more effort with the score since I know all of Shinkai’s films had great music to accompany the visuals.

This little short film was like an abridged work of Makoto Shinkai which certainly wasn’t bad. There was a decent amount of character development and the subplot with Mii was certainly heartwarming. While there was some good CGI and scenery, I thought there was too little animation used for a good portion of this short film. Dareka no Manazashi is a decent and painless watch, but I know Shinkai has been capable of more.

Content Warning: This is a fairly safe film for most people to watch. The only issue was the scene where (spoiler alert) a pet dies, but it’s done off-screen. Dareka no Manazashi is safe for all audiences.