The Place Promised In Our Early Days Review 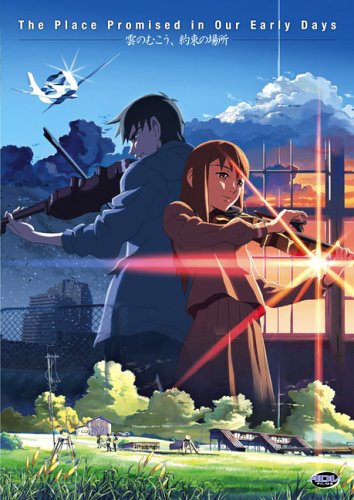 -The plane that Takuya and Hiroki create will be addressed as the Bella Ciela. In the film, there is a brief scene involving the plane’s interface that reads “Velocielo”.
Fun Facts:
-The Place Promised In Our Early Days has two firsts for Makoto Shinkai. This is his first feature-length film and this is his first film where he had an entire production team animating everything as opposed to animating everything himself like his previous works Voices of a Distant Star and She and Her Cat.

-Hilarious in Hindsight: This wouldn’t be the only time where Chris Patton would voice a character in a sci-fi anime that deals with the concept of parallel universes. He was also the English dub voice of Ayato Kamina from Rahxephon.

-Sayuri reads a poem that is from Spring and Chaos which was also animated although with anthropomorphic cats.

-At the 2004 Mainichi Film Awards, The Place Promised In Our Early Days won the Best ANimated Film Award.

-Ai Kawashima, the singer of the ending theme “Kimi no Koe” has also provided music for Shining Force Neo and the One Piece movie Episode of Alabasta.

I seem to be revisiting the works of Makoto Shinkai ever since I started Iridium Eye. During my teenage years, I was enthralled with his earlier works before most otaku and eventually the mainstream movie fans knew or cared about him. It was also mind blowing hearing that J. J. Abrams (Alias, Lost, Star Wars: The Force Awakens) bought the rights to a very certain movie of his and my jaw dropped. Yes, I’m obviously talking about Your Name, his most famous film that everybody has heard of and raving about it.

Sorry for sounding like a hipster, but where were all of you during Shinkai’s earlier portions of his career?

Before there was Your Name, there was a little movie back in the 00s called The Place Promised In Our Early Days that generated a tiny bit of buzz for the anime aficionados.

The Place Promised In Our Early Days takes place in an alternate timeline where the northern island of Hokkaido was separated from the rest of Japan and under the sovereignty of the (Soviet) Union and renamed Ezo. The story proper takes place in the alternate 90s where three teenagers meet. There’s Hiroki Fujisawa, a young aspiring airplane engineer who dabbles in archery. He also has a friend named Takuya Shirakawa who is ridiculously smart for his age. Both of them work part-time at a factory that subcontracts work for the military while also trying to build a plane called the Bella Ciela. The two boys have a crush on their classmate Sayuri Sawatari. She’s a girl who enjoys their company, but she has a strange habit of seeing bizarre dreams that happen sporadically. They all make a promise to build the Bella Ciela and to fly to the immensely tall Union Tower that’s in Ezo, but it can be seen from their hometown of Aomori. Unfortunately, fate has separated the three of them as Ezo-Japan tensions rise, Takuya works for the Japanese government and in liaison with the NSA. Hiroki moves to Tokyo, and Sayuri is somehow dreaming for three years in a strange coma. How will the three of them go to that promised place? Only time and fate can tell in this alternate Japan.

It has been years since I saw this film, and I was shocked with the entertainment and drama after all this time. The plot of the film was great and there were some twists and turns. The three main characters really are the catalyst of this film. Any other director would do stupid stuff with this love triangle and make this resort to harem fodder. The Place Promised In Our Early Days is not one of those anime projects at all as I’ve been wont to say for media I greatly enjoy. The Hiroki/Takuya friendship was very believable and those two had great chemistry together. They start as aspiring dreamers in their middle school years as they try to build a unique plane to reach the tower across the Tsugaru Strait while also having a friendly rivalry with impressing Sayuri. I also liked how the both of them would say the same things about building the Bella Ciela before saying “that’s not it” as they explain their situation to their boss Mr. Okabe. After the three year time skip, there’s a literal and metaphorical separation with the two as the sociopolitical climate becomes unstable and that’s not even getting into the real predicament of the tower with how it connects to Sayuri. Speaking of which, Sayuri was a good character in her own right. They could have made her into some useless damsel in distress, but those connotations become subverted. Yes, there’s the whole coma situation even though it’s not her fault, but one can really see her character shine in the dream sequences she has. Every day, Sayuri sees that she is alone not just in the world, but in the entire multiverse which makes sense with the context of the film as her dreams are revealed to be multiple realities. I won’t go into the whole details of this situation, but I will say this is one of the most unique usages of the “parallel universe” trope I’ve seen ever. Major props to Shinkai in the characterization department with the three leads.

The animation was still impressive after watching it in modern days. The 2D elements have aged very well and they can easily go toe-to-toe with several modern forms of animation. Watching this compared to Shinkai’s previous film Voices of a Distant Star was a leap in quality. Having an entire animation studio behind Shinkai really helped The Place Promised In Our Early Days and I don’t think this film would’ve looked half as good if he just animated everything with just his MacBook. There are so many detailed backgrounds and subtle things like reflective surfaces, fluid movement, or in the inside scenes of the train using little refracted lights on the ceiling. Just those tiny attentions to real life usages of lighting and effects made this visually engaging for most of this watch. Sayuri’s dreams/visions of multiple universes was impressive with the usages of saturation or de-saturation depending on the character’s mood. Some of the backgrounds reminded me a bit of Rahxephon’s Tokyo Jupiter or Mu scenes, so I wondered if Shinkai saw that anime prior to watching this, but the context of the scenery is entirely different from Bones’s little mecha series. The Place Promised In Our Early Days’ visual department has certainly held up.

The Place Promised In Our Early Days is a wonderful piece of animation, but watching it again as an adult allowed me to see some of the flaws more clearly. While several aspects of the animation are still impressive, I couldn’t deny some of the CGI has aged. Some of the trains in the background haven’t converged with the rest of the animation in hindsight. I was also a bit underwhelmed with some of the flight scenes of the Bella Ciela even though some CGI scenes were integrated much better. One thing that bugged me about the dialogue in both language tracks was the usage of technobabble. I didn’t need to be reminded of some NERV scenes in Neon Genesis Evangelion in a movie like this whenever the scientists were babbling on about statistics, matrices, and parallel universes in overly scientific terms. I don’t mind it in moderation, but it got annoying when Takuya resorted to that during the scenes involving his job. There’s also a lack of depth in some of the background characters. There’s Mr. Okabe who has a personality, but many of the other secondary characters were static to me. There were also cases of misspelled English in some screens which I found to be laughable. One debatable issue would be how the combatants of the war are portrayed and with the unseen character known as Tsukinoe. The combatants are faceless and Tsukinoe (Sauyri’s grandfather living in Ezo) playing a huge impact on Sayuri’s life despite all this info being an exposition dump. This could confuse some viewers, but I didn’t mind it as much. Having a faceless aspect with both Ezo and Japanese soldiers prevents it from going into jingoistic implications and it subverts traditional hero/villain dynamics that have plagued so many war movies. Sure, the Tsukinoe aspect does have a couple of plot holes, but I didn’t feel like they hindered on the main character’s development and I thought the lack of “real villains” only improved the plot and characterization by having the Hiroki/Takuya/Sayuri triangle be the main crux of the plot at large.

Shinkai’s first feature-length film still holds up even after it was released fourteen years ago. The Place Promised In Our Early Days featured a brilliant mix of action, romance, drama, and characterization that doesn’t feel forced or contrived. This movie was still able to hit me in the feels and I jumped for joy when Sayuri was able to break free from her coma (although I won’t tell you how to avoid spoilers). The music is top-notch work from Tenmon and that violin motif will get stuck in your head after watching this film. The visuals still work despite some aged CGI. The character development was certainly at it’s apex watching Hiroki, Takuya, and Sayuri grow as people through the film’s time span. I do wish they would give more personality to the other characters though. While Your Name maybe Shinkai’s most famous film, The Place Promised In Our Early Days is the definitive film that really put him in the upper echelon of animated film directors in my eyes. Do not pass this up.

P. S.
Why the frick has this movie not been re-licensed after ADV’s bankruptcy? 5 Centimeters Per Second can be rescued and not The Place Promised In Our Early Days? Seriously, I’m appalled that no company has re-licensed this underrated masterpiece like Discotek or even Sentai Filmworks (ADV’s successor company, no less!), who should know better because the execs that have been there since ADV Films’ heyday are literally half the reason why people in North America have been exposed to Shinkai’s older movies. You would think that after Your Name, companies would be chomping at the bit to rescue The Place Promised In Our Early Days or even Voices of a Distant Star, but that hasn’t been the case. Okay. My little nerd rant post script is over. Thank you.

P. P. S.
Crunchyroll, THANK YOU for allowing there to be legal streaming for this wonderful film. Now all the anime fans who aren’t familiar with Shinkai’s older work can appreciate this director at the apex of his career.

Content Warning: This was rated PG when this film was originally licensed, which I think is fair. There are some combat scenes with some characters getting shot. There is some blood including a scene where some of it splatters all over the Bella Ciela as one of the boys pilots the place towards the tower. The English dub does have a couple of swears although the Japanese version is profanity-free. Well, that’s ADV for you.