Beyond the Ropes Review 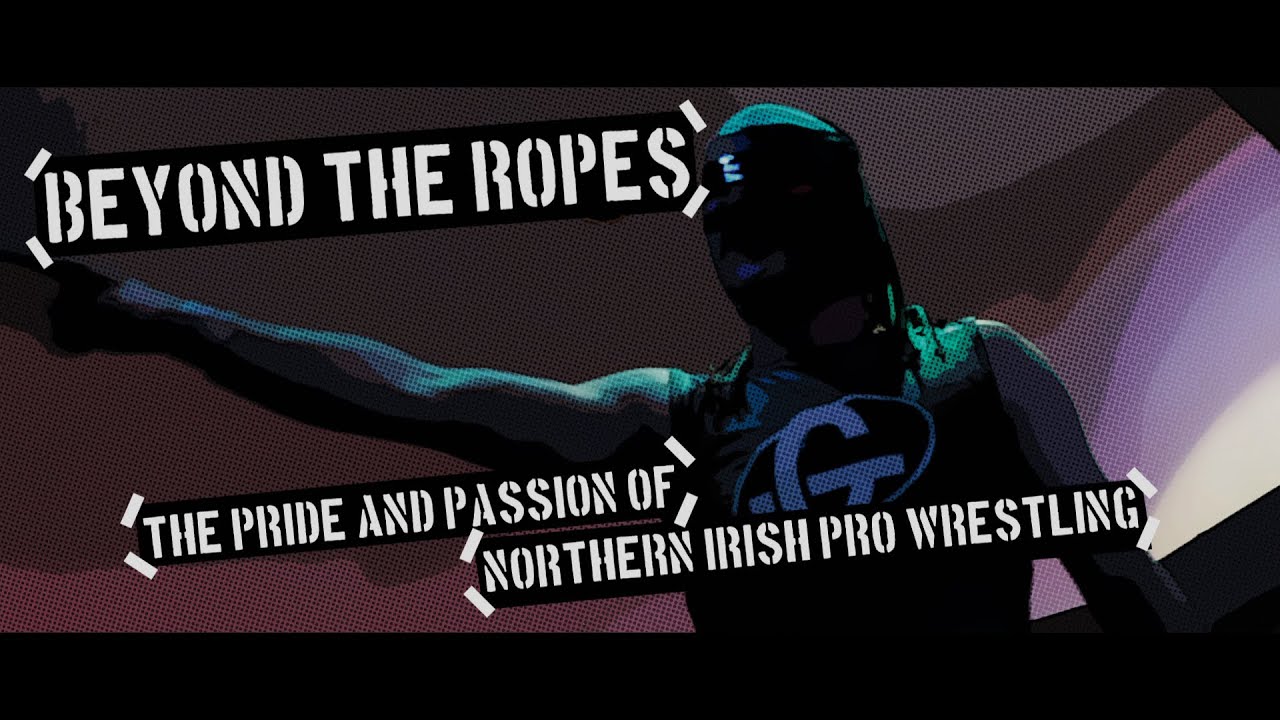 -Pro Wrestling Ulster can be found here.
Fun Facts:
-Damien Corvin who’s prominently featured in this documentary has been the PWU Champion twice in this company during his tenure there. He’s now part of a tag team/faction with other Northern Irish wrestlers Bonesaw and Dunkan Disorderly known as the Kings of the North (this may or may not be a Game of Thrones reference as I’ve been told) who’ve been winning tag titles across Europe.

-One current roster member who’s mentioned is Tucker. He was featured in last year’s WWE UK Championship tournament and he was trained by a current member of that roster. Tucker was trained by former IWGP Junior Heavyweight Champion (with his work in New Japan Pro Wrestling), longest reigning NXT Champion, and inaugural WWE Universal Champion Finn Balor.

Oh no. It happened again. I’m reviewing yet another wrestling documentary. First it was Tales of Masked Men which dealt with the history of Lucha Libre that was featured on PBS of all things. I wanted to look at other shorter documentaries. Some of my friends who are devout wrestling fans have been geeking out about the international indie scene and there was a brief conversation about UK federations. England’s got their own thing going with Progress, Revolution Pro, and Preston City Wrestling to name a few. Scotland has Insane Championship Wrestling as their top fed in that country. After hearing about the Kings of the North wrestling faction, I wondered if Northern Ireland had their own promotions available. Okay, there’s that and I also wanted some more representation from the UK at large and the only time I’ve reviewed anything that involved Northern Ireland was The Ultimate Guide to Penny Pinching which I was underwhelmed with, but I did like the budget wedding story and it just happened to take place in that aforementioned part of the United Kingdom.

Let’s see how this documentary fares.

Beyond the Ropes is about an indie federation in Belfast called Pro Wrestling Ulster or PWU for short that was started by Terry Thompson. They started out under a different company back in the 00s where they did hardcore stuff a la ECW. In 2007, it was re-branded as a PG-rated company while also being able to train some upstarting wrestlers in the area. There are several wrestlers who are interviewed as they talk about the history of this federation such as Damien Corvin, JDP, Tron, and others. Each one of them is trying to succeed while also spotlighting the talent in the Northern Irish wrestling scene.

The production in Beyond the Ropes was very good. Everything was crisp and clear in the presentation. I certainly believe that this documentary had better production than several indies that are even bigger than PWU. I liked how they showed some footage of the training school in Belfast where several people are learning how to bump or to do certain wrestling moves. This was very good as it provides insight to what it takes to get into the business. They even show some otherwise mundane things like setting up the ring or promoting the shows.

I thought the ideology of the wrestlers was interesting. Damien Corvin talked about being a huge fan of wrestling, but he wanted to do it himself. One thing that was a nice touch was where he’s at his house and showed his customized ring gear. At the time of that documentary, he had a vampire-based gimmick where he had a black and red outfit with some insignia involving blood and fangs. Corvin also talked in the training scenes with how people don’t just need to have athletic prowess, but how they need to learn different facial expressions and developing personalities like it’s an acting class of sorts. There’s also Tron who stands at 7’ 2”. He may act like some fearsome giant in the ring, but he’s a really nice guy outside of it. There was also a backstory of him getting the opportunity to get a developmental deal with WWE with their old Florida Championship Wrestling subsidiary (now re-branded as NXT) back in 2009, but wasn’t able to make it. Tron was able to take that knowledge from the biggest wrestling promotion and teach it to the up and comers, but was also saddened by not going to the main roster at that time. The founder Terry Thompson was a real father figure to the wrestlers. He mentioned that his father and grandfather watched it, so he was able to carry on that tradition. It’s in his blood so much that he’s even been to wedding where half the guests and groomsmen were part of that industry. It was also cool how the roster treated him like a mentor and were able to talk to him about different things. PWU really felt like an unorthodox, yet very tight-knit family.

While Beyond the Ropes had a great portrayal of a small indie pro wrestling federation, I do wish that the documentary would be able to piledrive all the flaws. The stories on PWU and the behind the scenes look was great, but I would’ve liked to have seen more action. There was a really quick montage of random matches, but some more of the matches or providing storyline context to whatever matches would be great. At the time of the documentary, it shows that a luchador named Sanchez becomes the PWU champion. It was funny how no one saw the result, but that would’ve had way more impact (no pun intended) if he was interviewed at all. It would be different if someone like Corvin, Tron, or even JDP won the belt at that time, but it wasn’t the case. I also thought there was an overabundance of talking head and still footage for interviews. They do break it up with the training scenes, but I would’ve liked to have seen some more variety in the footage.

This Northern Irish federation seems interesting and I think I’ll check out some of their video archives. Beyond the Ropes was a good documentary for a subject I never thought I’d be talking about again on Iridium Eye. There were great stories and I thought it was impressive with everyone working together while trying to put Belfast on the map while not trying to be overshadowed by England or Scotland. The visuals were great which I appreciate. I do wish that there would be more footage from the in-ring components though. Beyond the Ropes has a lot of effort behind it and I can picture wrestling fans who enjoy indie feds could get into it.

Adjustable Point System:
Add 1 point if you like indie pro wrestling.
Subtract 2-3 points if you only like MMA.

Cons:
-Lack of in-ring action shown
-Overuse of talking head footage
-The championship outcome was underwhelming in the montage

Content Warning: This is a safe watch for most people. There is discussion about wrestling injuries and how there used to be hardcore sports such as tables or barbed wires, but they aren’t shown. Only a couple of swears were uttered, but it wasn’t a big deal. One of the interviewees was a retired wrestler who is openly gay, but no one had a problem with it and to be honest no one would have even known just by looking at him since he doesn’t use any flaming LGBT stereotype gimmick or real life personality. That would be the most controversial thing, but it’s mentioned in passing.

All photos property of their respective owners and used under US “Fair Use” laws.  Beyond the Ropes is property of Redcap Productions and the image is from their website and YouTube.