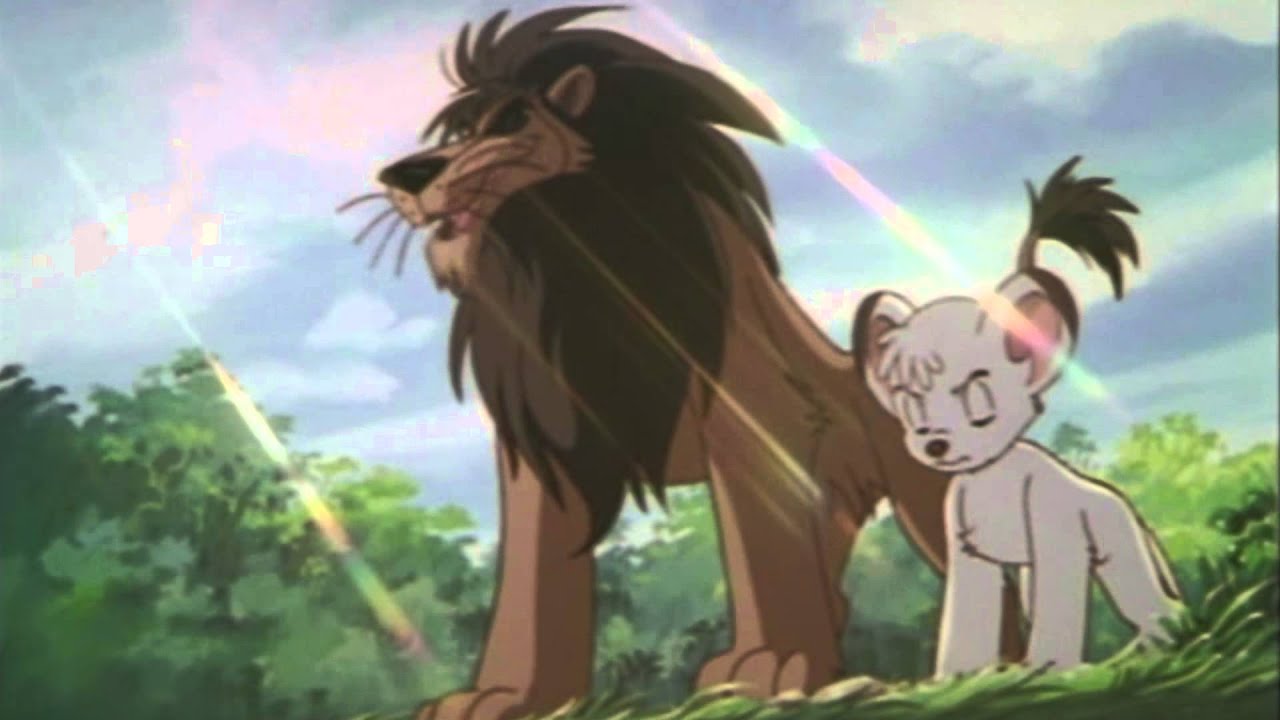 -The canon is implied to be a prequel to the Jungle Emperor Leo 1997 film given the animation and art style. Leo/Kimba is a cub in this short film, and I would recommend seeing at least the first few episodes of the TV series to understand the characters.

-Because it’s my blog, I’m going to address the villain as Claw instead of Bubu since it’s a better name. Speaking of which, the Japanese website lists Claw as Leo/Kimba’s uncle despite not being mentioned in this or any Kimba incarnation. This makes absolutely no sense since they aren’t related at all, but it is so obvious why they mentioned it. Think about it, why would they make a black-maned, dark brown-furred lion with a wounded left eye the main character’s uncle? I know Claw was created first, but come on!
Fun Facts:
-Mifyuu Hiragi who played Lune in the Jungle Emperor Leo movie plays Leo in this film. Like father, like son, maybe?

-Director Fumihiro Yoshimura has also directed the Black Jack OVAs and was an episode director for Bakuman and Allison & Lillia.

The third time is the charm. Once again, I’m going to be reviewing something in the Kimba the White Lion/Jungle Emperor Leo series. That is one anime I never expected to get into despite watching it for some ulterior motives because of a very certain obvious controversy that has been associated with this old-school series from one of Japan’s first major animators. This time, I’m taking on a short film that was made a few years after the last film was made.

How does this take on the one true king fare?

Jungle Emperor Leo: Hon-O-Ji is a tale about what constitutes being an ideal king versus being a real king. This film goes back to Leo’s childhood as he’s still learning to rule the kingdom while also making sure there’s peace between animals and humans. There’s a ocelot cub (more on the species issue later) named Paola who is lost and is stranded in the jungle. She freaks out some of the others in the kingdom particularly Coco and Tommy as they’re minding their own business. Leo accepts her into their kingdom, but some haphazard situations happen after she lives with the rest of the fauna. There’s been some trouble like some wreckage and broken bird’s eggs behind the scenes, but unbeknownst to everyone else, it was the work of Claw AKA Bubu . Claw calls out Leo for him giving the benefit of the doubt and for not being a real king as he manipulates the others into getting the son of Panja expelled.

The animation here was serviceable for this iteration on Osamu Tezuka’s famous lion (or infamous for some Disney fans out there). The animation is nowhere near as good as the movie which is easily one of Tezuka Productions’ best works from a visual standpoint, but there was a good amount of fluidity going on with many scenes. It certainly improves as Leo fights Claw and the fight even got a bit brutal at a critical point. The animation does look lively enough while also using coloration to it’s best as Tezuka shows are wont to be since the original Kimba series.

This short film felt like a missing episode of the original 1965 TV series, but with better animation. I liked the morality shown of what being a good king is compared to real-life kings. One thing that this anime series has excelled at is really showing the responsibilities of becoming a great leader as Leo learns to do his best to be as good of a king as his murdered father Panja was. The trend certainly continues over here as Leo faces the predicament of taking responsibility for him letting Paola into the kingdom. It’s a political aspect that I’ve rarely if ever seen in movies geared towards younger audiences as the viewer can really feel the weight of having the buck stop right where Leo is whether he wants to admit it or not. Sure, Claw is obviously manipulating the other animals, but he does bring up legitimate points about being king even if he’s doing this for very nefarious reasons.

It also wouldn’t be a Leo/Kimba review without mentioning that one other Disney movie that came out forty-four years after the original manga and this short film certainly adds to that point. Remember in the Jungle Emperor Leo movie how there was a not-Pumbaa warthog who eventually gets shot? That same warthog is one of the animals in the background. However, what really takes the cake is a scene in the middle that will instantly remind people of The Lion King and it needs to be addressed. Before I explain what happens, let me say that this is a re-contextualized scene from Kimba the White Lion when the villainess lioness Belladonna tries to trap the main protagonist by pushing him off a cliff. Instead in this case, Belladonna is replaced by one of the main villains Claw. Sure, he doesn’t have his hyena henchmen around nor does he take over the kingdom this time, but there is a scene where he (I kid you not) attempts to kill Paola by pushing her off a cliff. The Lion King fans will cry rip-off as Claw has his “Long live the king” moment, but it’s not stealing if it already belonged to Tezuka to begin with since it has been done since the original TV show. You’re welcome. You’re very freaking welcome, everyone.

While the parts I liked about the Leo/Kimba series do return here, I do confess to being a bit underwhelmed. The 2D animation is fine, but the intro CGI involving the Phoenix was very dated as it didn’t mesh with the rest of the animation. I also found an obvious error with Paola. She’s addressed as a tigress cub, but she isn’t striped. That’s why I said she’s an ocelot instead given her coloration and fur pattern. The timing of the plot was very rushed as it felt like they were cramming an episode’s worth of content into only nine minutes. Yes, it does tell a complete story, but it could’ve easily been expanded upon like Paola’s relationship to her human owners. Also, it was so painfully obvious that Claw was in on everything. Even though he’s the only anime villain to have a Disney villain look like him, it can be quite boring seeing a character who looks so diabolical and disfigured. To be fair, Claw certainly isn’t a Draco In Leather Pants like his British-accented doppelganger (thank goodness) that makes people want to root for him instead, I wish they could give him more subtle things about his personality even though I did think his talking points about being a “real king” are accurate given how tyrannical rulers have been in real life.

Jungle Emperor Leo: Hon-O-Ji was a good entry into the Leo/Kimba series although certainly not a great one. The morality displayed in previous incarnations certainly shines here and it’s a welcome relief to see the ideals of a good king versus a real king at play in a non-preachy way. The animation besides the CGI worked decently here. I also enjoyed the voice acting with Leo and Claw being highlights in this short film. I did shake my head at the misrepresentation of Paola’s species and the obviously evil shenanigans Claw pulled off though. Much like anything else Leo/Kimba related, you will be reminded of The Lion King whether you like it or not given the controversy connecting the creations of both lion stories. The Hon-O-Ji film was a decent watch, but I liked the Kimba TV series and the Jungle Emperor Leo movie more.

Cons:
-Aged CGI in the intro
-Rushed pacing
-Failure to identify Paola as an ocelot instead of a tiger

Content Warning: This is tamer than the Jungle Emperor Leo movie, but more intense than most Kimba episodes. Claw kills some birds that didn’t hatch yet and attempts to kill Paola in the infamous cliff scene that references the Belladonna scene from the original TV series although many people will misconstrue it as a rip-off of Mufasa’s death scene if they had no context of Tezuka’s works. The fact that Claw is fighting a young Leo is lampshaded as the villainous lion claims that the protagonist is too young to fight him. Then again, Claw’s design in this iteration is scarier then how he looked in previous versions. The fight itself even has some blood as Leo lacerates Claw in a surprisingly brutal fashion given the atmosphere of this short film. It’s still safe for kids, but it’s not as G-rated as the 60s show.