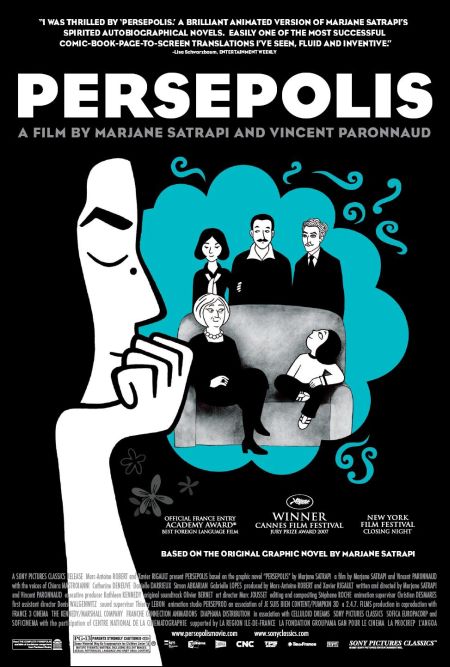 AKA: N/A
Genre: Slice-of-Life/Coming of Age/Experimental
Year Released: 2007
Distributor: Sony Pictures Classics
Origin: France/Iran
Running Time: 96 minutes
Rating/Recommended Audience: PG-13
Related Films/Series: N/A
For Fans Of: Persepolis is certainly an original autobiographical tale, and I can’t think of many films like it.
Notes:
-The original French language track was used, but I’ve also seen it dubbed when I first watched it years ago.

-Marjane’s uncle’s name will be spelled Anoush as opposed to Anoosh.
Fun Facts:
-Persepolis is based on an autobiographical graphic novel of the same name by director/creator Marjane Satrapi.

-Both the French and English versions have Chiara Mastroianni and Catherine Deneuve playing the adult version of Marjane and her mom respectively. Interestingly enough, Mastroianni and Deneuve are daughter and mother in real life.

-In the English dub, Anoush was played by a rockstar. No, really. He’s voiced by Iggy Pop in the dub.

-Persepolis was censored in Iran, dropped from Thailand, protested against in Tunisia, and it was temporarily banned in Lebanon.

-Cultural Bonus: Persepolis is named after the original capital of the Persian empire where modern-day Iran is currently located.

Now here’s an animated movie that helped break out of my anime shell when I saw this at a film discussion event years ago. Granted, I was slowly phasing out of my anime phase back then even though I rarely told people about me liking Japanese animation. Out of nowhere, here comes this autobiographical animated film created by an Iranian immigrant to France of all things and I was surprised by how well this movie was when I first saw it. Shoot, I even read the original graphic novel it was based on in college when I took a comic book and graphic novel course (yeah, I took a class about graphic literature. Be jealous.). Much like other movies and series I’ve covered on Iridium Eye, this also involves me revisiting the things I’ve seen before.

Persepolis is about the life of one Marjane Satrapi. The story flips between colorful scenes in the present where Marjane is at an airport while a majority of the narrative takes place during black and white scenes of her childhood and early adulthood. Marjane was born and raised in Iran during the Shah’s rule. She was focused on trying to be like Bruce Lee and also wanting to be a prophet to help the other Iranians. There was revolution in the streets and the Shah was overthrown by the people much to the commoners’ rejoicing. However, years later, the Islamic Party wins by a landslide which causes the government to become a theocracy while shunning Western influences given the Shah’s ties to Western governments installing his dictatorship. She eventually moves out of Iran and goes to Vienna to study as the Iran-Iraq War became rampant in her home country. Marjane does her best to survive in the peaceful parts of Europe, but some existential things affect her.

I forgot how good the animation was. The character designs may be simplistic, but there’s still a humanized element as each character has their own unique expressions. I thought the coloration with black and white for the past scenes while the moderns scenes were in dark hues were fascinating. The fluidity of the character’s movements was just milky smooth. Despite being over eleven years old, Persepolis’s animation is still impressive and aged very nicely. If this were done in a CGI-style or if this looked like a typical animated movie, then the visuals would certainly have aged by now. Seriously, if you show Persepolis to someone who’s never seen or heard of the film or original graphic novels, you could tell them this was made a year ago and they could actually believe you. Those animators deserve a huge round of applause for their work in translating Marjane’s story from the comic book page to the silver screen.

There was a great balance of humor and seriousness that makes Persepolis work so well. The funny moments typically involve Marjane growing up. When she’s a kid, she’s just so weird as she tries to imitate Bruce Lee’s kung fu moves on people or being way too inquisitive for her own good when she asks Uncle Anoush a ton of silly questions. Some of her eccentricities during her childhood years sort of reminded me of Lilo’s personality from Lilo & Stitch, and despite me not being a Disney fan as one may have inferred from certain other reviews, this is actually a compliment since children can be really hard to write as legitimate characters. There’s even the hilarious montage where the adult Marjane is battling depression where the movie breaks out in to playing “Eye of the Tiger” by Survivor as she sings along to the song while doing random tings like waxing her legs, exercising, and parodying Flashdance as she’s dancing around. With that being said, the serious nature certainly is an undercurrent. There are several people including named characters who die in the revolutions and the Iran-Iraq war which takes a psychological toll on everybody. During the post-Islamic party installment of the government, there are people fighting for the last remaining food items at the supermarkets, vice squads shutting down illegal parties that would normally be legal in several other countries, and for imprisoning anyone who defies the reign of the Ayatollahs. The depression aspect that affects Marjane during her time in Vienna had a darkly ironic side to it that is lampshaded in the film. She’s survived wars, witnessed deaths, and lived through regime changes, but what really breaks her heart was an event that would be way more shallow than any of those things that she lived through back in Iran. I enjoyed the balance and the portrayal of both the happier and sadder moments.

Persepolis has a ton of great things to like about this film, but not I can’t say this was a flawless piece of animation. For starters, I thought most of the other characters were underdeveloped. I understand that Marjane is the main focus, but the autobiographical aspect can be too overbearing as other characters were certainly overshadowed. I also thought that Marjane’s return to Iran was slightly underwhelming. When she first goes back as an adult it was a very emotional moment and I felt it, but I thought it meandered after her dad explained the results of the war to her. One controversial aspect would be how religion was portrayed. It played a major real life role in post-Shah Iran as the Islamic Party was voted in and enforced several things like the hijab on women or banning alcohol. There are also the recurring visions of God/Allah to Marjane as she rejects Him and comes back. Some people may not get the irony of that one scene where Karl Marx pops up right next to The Most High and the ones who do could be offended, but I thought it was a funny scene because of the irony and I never saw it as offensive. I also thought Persepolis has so much content and story that some parts felt really rushed during the second half. Although the “Eye of the Tiger” scene was hilarious, I did notice that Marjane’s voice actress wasn’t comfortable in singing English as it was thickly accented and broken. Those were some flaws I noticed.

This animated autobiography was a wonderful watch. Persepolis is a surreal take on a very realistic story that I could believe would happen to someone in Marjane Satrapi’s situation. The animation is immaculate and I wish more studios would go back to doing 2D traditional production. The storylines have a great sense of humor and sorrow mixed in without resorting to Cerebus Syndrome or feel mismatched. I do wish that some of the other characters would get spotlighted more frequently though. Persepolis is certainly a highly recommended watch from me. Definitely check it out.

Cons:
-Pacing issues in the second half
-Marjane getting too much of the spotlight several times
-Commentary on religion (Islam and at one point Christianity) could be offensive to some

Content Warning: Persepolis is certainly a tough PG-13 movie. There’s some strong language including Marjane dropping the F-word in both the English and French versions. A major backdrop is the political turmoil in Iran during the 70s-90s where over a million people died in the Iran-Iraq war and that’s not including the barbaric reign of the Shah during his regime. There are sexual references sprinkled throughout like some sex scenes that are self-censoring, the talk of homosexuality is brought up, and the fact that Marjane’s grandmother admits to putting jasmine flowers in her bra. Some drug references are there such as drinking, smoking, and recreational marijuana with the last part being a part of Marjane’s trips to Europe. The scene where Marjane experiences a noise rock/punk band involves the lead vocalist screaming his lungs out while flipping the bird at the audience.