She and Her Cat Review 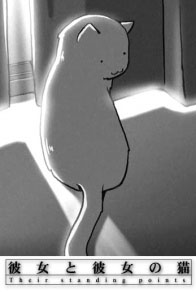 AKA: She and Her Cat: Their Standing Points, Kanojo to Kanojo no Neko, Kanojo to Kanojo no Neko: Their Standing Points
Genre: Slice-of-Life
Year Released: 1999
Distributor: Unlicensed (DVD formally available from ADV Films)
Origin: Japan
Running Time: 5 minutes
Rating/Recommended Audience: G
Related Films/Series: She and Her Cat: Everything Flows
For Fans Of: Dareka no Manazashi, The Aristocats
Notes:
-She and Her Cat was released in America as an extra for the Voices of a Distant Star DVD.

-This review reflects the original short film and not the TV series that was released in 2016.
Fun Facts:
-This is the debut work of Makoto Shinkai. It was made with Adobe After Effects and he voiced the cat himself.

-17 years later, She and Her Cat would be adapted into a one-shot manga and TV series.

-Chobi the cat makes a cameo in The Place Promised In Our Early Days albeit redesigned.

-She and Her Cat was sold on CD-R and sold 5000 copies through mail order and conventions. Yes, the same guy who would eventually make Your Name started out by selling his work at the anime convention circuit.

It’s another review involving the now-famous Makoto Shinkai. As I’ve made it clear, I’ve followed his works for a long time when he barely got any mainstream attention. This time, I’m going to take it really old-school as I review the first thing that Makoto Shinkai has ever created.

She and Her Cat is what you would expect it to be. The perspective is from a housecat named Chobi who narrates about his life as he lives with an unnamed young woman in an apartment. He enjoys being doted on by her and returns her affection. The seasons change rapidly and there are ups and downs that happen between Chobi and his owner.

The animation style was surprisingly good despite the time it was created and the fact that Shinkai animated this film himself. The whole film is done in black and white which is a sharp contrast to his later works, but it was still good. Shinkai’s penchant for great scenery started out over here with the season changes and the details of all the environments that the characters are in. Sure, it’s far from his most visually appealing work, but most of the animation surprisingly holds up.

The Chobi character was interesting. He waxes poetic about his life living in the apartment with this unnamed woman. I can see where Shinkai gets the idea for making flowery narrations that I’ve witnessed in several of his future works. Chobi has an affection for the owner that was certainly sweet for most viewers, but I also thought that he acted unintentionally human at times. The narration does involve the woman’s voice a couple of times including the final words which are spoken by both Chobi and the owner which is another thing he would repeat in Voice of a Distant Star and Your Name.

She and Her Cat was an initial piece of work, and I can tell that this would be far from his best animated feature. The subplot with Chobi getting a “girlfriend” cat named Mimi went absolutely nowhere. While people might find the Chobi character having an affection to be cute, but I thought it went a bit overboard as it sounded like he was really in love with the owner which I found to be creepy. The scenery was great, but I can see shortcuts like how you never see the woman’s face or using so much cutaways and B-roll animation for over half of the film’s duration.

The first Makoto Shinkai film was a neat look into the early parts of Makoto Shinkai’s career. It was a calm and understated story that did what it needed to do. There was a historical aspect seeing how far he’s come since then. The minimalist piano for the soundtrack by then-regular collaborator Tenmon. It was cute, but this had nowhere near as much depth as his later movies. She and Her Cat was a very short and painless watch, but it’s certainly not his best work.

Cons:
-Dropped subplots (the Mimi one is obvious)
-Too many animation shortcuts
-Chobi’s affection for his owner gets awkward with the implications

Content Warning: This is certainly one of Shinkai’s more family-friendly works not that he made anything more offensive than The Garden of Words or the naughtier moments of Your Name. There’s nothing really objectionable except that Chobi’s views of his owner could be a bit awkward.