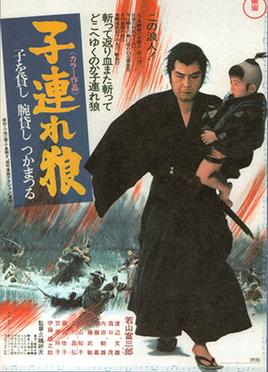 -The Criterion Collection DVD box set was used for this review.
Fun Facts:
-Lone Wolf and Cub is based on a manga series by Kazuo Koike and Goseki Kojima. You might know Kazuo Koike as the creator to Crying Freeman, Lady Snowblood, and Samurai Executioner.

-Language bonus: The main character Itto Ogami’s own name is a wordplay to the title. His surname Ogami means “pray”, but if you swap out the G with a K, it becomes “Okami” which literally means wolf in Japanese. Since he’s a widower dad, it makes perfect sense for him to be codenamed as a lone wolf while his baby son Daigoro would be the cub in this metaphor.

Here I go again reviewing something from the seventies. It’s only the second time I’ve critiqued something from that time period as the first film I tackled was the French/Czech sci-fi animated film Fantastic Planet. I’m just doing my best reviewing movies regardless of the decade it was released in and it certainly came out a long time before I was even born. I also realized that it had been awhile since I saw some live-action samurai films with the last one being the criminally overrated sequel to Yojimbo known as Sanjuro (sorry not sorry, Kurosawa fans). I thought I would give myself a challenge by reviewing the original six films from Koike’s debut series to make things a little more exciting here at Iridium Eye. Hopefully, you haven’t been bored or confused despite all of the obscure things I review on this blog.

Onward, to the review!

Lone Wolf and Cub is a series taking place centuries ago in Edo-period Japan. There’s a former executioner by the name of Itto Ogami who wanders around Japan with his toddler son Daigoro. Both of them are codenamed “Lone Wolf and Cub” as they try to get money for their services which range from random odd services to assassination with the latter being Itto’s de facto specialty given his old job with the shogunate. In his backstory, Itto’s wife was slaughtered by the Yagyu ninja clan and they also frame him for wanting to overthrow the shogunate. Itto is fired from his executioner job and his family name has been shamed. Itto vows revenge against the Yagyu clan for murdering his wife even if it means following the “demon path in hell” in this savage world.

There’s just something cathartic about revenge films for me as disturbing as it sounds. It gives some needed face heat for the hero and a good reason why they have purpose in the story even though vengeance itself isn’t always the best thing to achieve (it’s something I’m still learning about). Lone Wolf and Cub certainly delivers in that regard with Itto just pulverizing anyone who dares stand in his way in the most gory fashion ever. His choice to take the demon path as a form of twisted righteousness was surprisingly believable as he knows about the future consequences of his actions in addition to being such a cold killer himself. These fight scenes are over-the-top in blood and the style of fighting involved, but they rarely get to wuxia levels where people are flying everywhere, so there’s some restraint. Yes, I understand the irony of calling Lone Wolf and Cub somewhat restrained despite the gore-fest it is, but at least most of the fights are grounded.

Itto is a complex anti-hero. Prior to this film, I couldn’t think of any single fathers going around killing people within proximity to their kids. That must have been quite novel doing that and you can see elements of papa wolf type characters in media such as Die Hard, Taken, and even The Punisher as the main characters get revenge on anyone that hurt or killed family members. The originality of the situation is something I do appreciate about him even though there are some disturbing elements to Itto’s character. He is just too stoic in most situations which most men would appreciate since he rarely ever emotes unless it’s anger or seriousness. Despite the comparisons of other action heroes, he’s different in various ways with him constantly in his son’s life, having unorthodox parenting methods to say the least, and Itto isn’t some typical six-foot-something guy with rock hard abs since he’s a bit overweight. However, he’s definitely taken seriously as an action hero.

Lone Wolf and Cub may have some fun action scenes and a sympathetic backstory with the main characters, but I couldn’t get into the hype of the inaugural movie in this series. The blood effects are incredibly dated much like Koike’s later work Lady Snowblood. The blood looks like red acrylic paint being poured around. I also had some severe umbrage with the Itto character for different things. In the first film, he never loses a fight let alone gets a scratch on him. He’s in full-on God Mode Marty Stu mode as he’s severing heads and taking names around. Secondly, he’s a character who’s willing to kill children. Don’t believe me? There’s an off-screen shot of him committing seppuku against a daimyo heir who doesn’t look that much older than his son Daigoro. Don’t even give me that “he’s only doing his job” crap. Do you really want to put the same words as the Nuremburg Trials like that? There’s the iconic scene of Itto putting his sword and ball on the ground for his baby son to choose. He’s barely old enough to talk and he had to pick between living in this demon path by picking the sword or being forced to reunite with his murdered mom should he have picked the ball. Dude, Itto. Calm down. Thirdly, during his visit at the ronin-ran hot springs, he is forced to be unarmed to gain the criminals trust. During that time, some of those same criminals gang rape a woman who is clearly within earshot of him, yet he did nothing. That really angered me as the gravity of the situation sunk in.

Lone Wolf and Cub was below mediocre for me and some thrilling fights didn’t change that. The production is certainly seventies material, but the blood effects were obviously dated for me. The background music is fine even though it gets a bit muffled with the older audio engineering. The Itto character is complex, but I found him to be unintentionally unlikable even though I’m supposed to care about him with being framed and with his wife being murdered. I didn’t like the start to this series, and I hope that Lone Wolf and Cub gets better after this overrated first film.

Content Warning: It’s a Kazuo Koike creation, so there’s no way this would ever be for kids. The fights are extremely gory as people are beheaded, dismembered, and are bleeding buckets throughout the film. There’s nudity with an insane woman breastfeeding Daigoro and there’s a sex scene with Itto sleeping with a prostitute. I did have an issue with Itto killing a child off-screen and that fridge horror just sinks in as part of his duties as a shogunate executioner. Oh yeah, there’s some swearing and some double entendres, too.

All photos property of their respective owners and used under US “Fair Use” laws. Lone Wolf and Cub is property of Kazuo Koike, Toho, and The Criterion Collection. The film poster is from Wikipedia and is property of Toho.