The Piano Tuner of Earthquakes Review 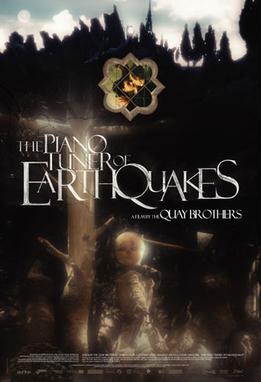 -Gottfried John, the actor of Dr. Emmanuel Droz has played a Bond villain before. He was General Arkady Ourumov in GoldenEye.

-The late composer Trevor Duncan was a self-taught musician, and this film was his last work in the conductor’s chair before dying.

-The Brothers Quay has animated several commercials and music videos. They helped animate the video for “Sledgehammer” by Peter Gabriel. Interestingly enough, animator and guitarist for Tool Adam Jones have been influenced by these brothers. Even Kurt Cobain from Nirvana implied that Adam Jones ripped them off to the point where he thought that The Brothers Quay should throw a copyright infringement lawsuit at their music videos.

Now, here’s a group of animators I finally get a chance to give the Iridium Eye treatment. Stephen and Timothy Quay, the renowned stop-motion artists hailing from London via Norristown, Pennsylvania will be the animators in question. I’ve heard of them and I’ve seen a few of their short films a long time ago. They have a very unique style and an experimental flair to their works which is something I appreciate from what I’ve seen. I thought I would check out one of their feature-length films which is a live-action/stop-motion animation hybrid film and see what I thought of it.

The Piano Tuner of Earthquakes takes place sometime in the 19th century. An opera singer named Malvina van Stille is murdered on stage while she sings. She died a day before her wedding, and her body was kidnapped by the sinister Dr. Emmanuel Droz. He does his best to reanimate her dead body to make her sing again for a performance at his residence which also happens to be an elaborate steampunk asylum. Dr. Droz hires Felisberto Fernandez AKA The Piano Tuner of Earthquakes to help him out. There are no pianos, but Felisberto is hired to tune seven musical automatons with the seventh one containing the catalyst to Malvina. The dead opera singer has no idea what is going on besides knowing that she’s going to sing, but she finds Felisberto to be quite familiar to her as he resembles her fiancee.

Strike this movie another one of those extremely weird and experimental features. In a way, I’d argue this would be weirder than Fantastic Planet since that animated film was more straightforward in its plot than this. The setting is very elaborate with its Victorian technology fused with Weimar Republic-era German expressionism art. There’s an Arcadian setting around that also contains creepy machines like some sadistic robots laughing while a river of (fake?) blood rises in one corner. The automatons are hydro-powered with scenes involving a giant water funnel tornado in the background powering up the machine in the compound. The scenes also flip between reality, fantasy, and delusions depending on the character even to the point of shared delusions like a steampunk Paprika if that makes sense. The world-building and visual presentation are highly creative while also frightening at times.

The small cast of characters can add some sanity or insanity depending on the person. Felisberto is clearly the most normal character in the film, bar none. He’s just there to do his job but is confused about what’s going on with this strange asylum. There’s the maid Assumpta who tends to seduce Felisberto at several points in the strangest ways possible. Seriously, I never thought anyone would think anything is sexy by comparing their body to a forest, but that’s one of the saner things she says. Then, there’s the villain Dr. Droz. He’s very over-the-top and crazily obsessed with Malvina in some very creepy ways considering that he’s the same person who killed the opera singer. That’s not a spoiler, it happens barely two minutes into the film. He rambles about exotic ants that are way more metaphorical than I expected while he freaks out whenever Felisberto dares to even look at Malvina.

The Piano Tuner of Earthquakes does falter in different ways. I do appreciate that Felisberto provides sanity to this bizarre film, but I felt that he had no personality. Sure, he’s good at tuning pianos and is a nice person, but there’s nothing else to him. I also thought that the dialogue and presentation gets very pretentious that rubbed me the wrong way. The talk about the “electricity of women”, erotic forests, and other weird things felt like The Brothers Quay were trying way too hard. The ending becomes way too bizarre and it makes no sense despite the creative imagery going on. I can handle experimental media and other works that are considered really artistic, but some things became incomprehensible which aren’t as artistic as certain people claim or deny claiming.

This entry in The Brothers Quay’s filmography was a creative attempt, but I wasn’t feeling it as much as I wanted to. The production is certainly top-notch with both the live-action and animated moments. The symphonic and experimental music was great with the sound design really being integral to the events. The insanity portrayed was certainly unsettling and Dr. Droz was a legitimate threat to the protagonists even with his petty goals for revenge against the opera world. The story and dialogue get too pretentious which will certainly lose casual viewers and viewers who are more versed in art-house productions. The Piano Tuners of Earthquakes was an above-average film with may more potential than was presented here.

Adjustable Point System:
Add 1-2 points if you’re a Brothers Quay fan.
Add 1 point if you like stop-motion animation.
Subtract 2-3 points if you like your movies to be more straightforward.

Content Warning: Teens and up assuming they can understand what’s going on. There’s a murder at the beginning of the movie with Malvina dying at the hands of Dr. Droz. Some sexual elements are there albeit very bizarre with Assumpta being seductive around Felisberto and even her employer Droz. There is some nudity with both female characters with some nip slipping going on. I also have to admit that the whole situation with Droz fawning over Malvina is creepier than it had any right to be because of the necrophilic undertones with him reanimating the singer he just killed while making her sing for his own opera production.