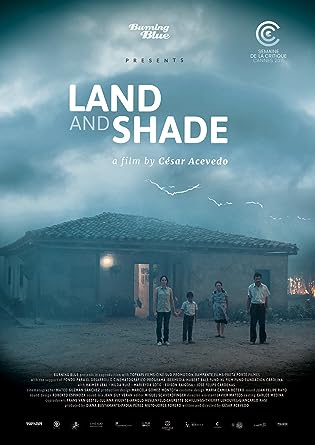 -This film is the directorial debut of Cesar Augusto Acevedo.

-Actress Marleyda Soto (who played Esperanza in Land and Shade) is the only person in the main cast to have been in other films. She’s acted in Dr. Aleman, Dog Eat Dog, and Oscuro Animal.

South America has a fascinating film scene and I need to become more aware of it. As you know, I’ve covered other films from that continent such as the Brazilian animated film Boy and the World, the Ecuadorian mystery/crime drama Cronicas, the works of Venezuelan director Lorena Alvarado such as Beatrice and Comadres, and I’ve reviewed two Argentinean films with Eva Doesn’t Sleep and The Window. However, there are some countries I hadn’t seen films from until recently. This country in particular would be Colombia (although one could argue Chile as well since they have co-production here). A nation known for it’s coffee blends, the birth place of John Leguizamo (who was in the aforementioned Cronicas, interestingly enough), and Shakira must have some some films in that country. I managed to rent this 2015 film to see what the Colombian cinema scene would be like. The fact that this film got a Camera d’Or from Cannes which is an award that one of my favorite directors Jafar Panahi won must be interesting, right? I decided to give this Colombian film a try.

Land and Shade takes place in a small rural village in Colombia. An older man named Alfonso returns to this town after being gone for seventeen years. He sees his family such as his aging ex-wife Alicia and his sickly adult son Gerardo. Alfonso sees two new people in the old house such as Gerardo’s wife Esperanza and their young son Manuel. There’s been tension during his absence, but the town has suffered from ashen rain from the burning of nearby plantations and the only industry going on is cutting sugar canes. The workers haven’t been paid for their service and Esperanza and Alicia have to work in the cane fields since Gerardo is too ill to work there. Alfonso is hit by the gravity of the situation, but he wants to do everything in his power to reconcile with his family despite the drama going on around him.

This was certainly a darker family drama that I’ve seen since August the First, but Land and Shade is a superior film compared to that one. Alfonso is a character that I thought I wouldn’t like as I believed he’d be some deadbeat patriarch, but I was proven wrong throughout the course of the film. Even though he’s made mistakes, I really like how he is making amends with everyone starting with the grandson he never thought he had with Manuel. Alfonso teaches him about the birds in the town and even buys him a birthday present. His actions really make up for the wrongs he caused by him not being at home. Alicia starts out bitter and has a quiet, yet intense resentment to her ex-husband, but even she gets development as a character. It’s implied that he’s done some bad things, but she finds out that she’s no better than him when Esperanza calls her out on her attitude. There was some great chemistry going on with those characters in particular and the situation was quite believable.

The cinematography was also a bit impressive. This wasn’t some high budget release, not did it need to be. The viewer can see these vast sugar cane stalks growing around the town, seeing unpaved country roads, and some older houses around. Even though this is clearly a locale based in Latin America, some of the aesthetics could apply to any other tiny boondock village in the world which makes the situation relatable. This isn’t something that takes place in a major Colombian city like Bogota, Medellin, or Cartagena (the last city is something you might have heard of from Romancing the Stone, for those of you scoring at home), so this is entirely different than what one would expect from that country. There’s a lot of usage of shading especially given the shades and closed off windows in the family home to prevent Gerardo from getting even more sick with the ashen air whenever the plantations burn. I thought most of the scenes were creatively shot.

Land and Shade has good things about it, but I wasn’t feeling every second of this film. While the usage of shading was on point most of the time, there were some other scenes that looked jet black as if I stared at a blank screen for a few seconds. The part where Esperanza is trying to get on a bus at night was one such example. There’s a major plot hole as to why Alfonso left the family. Where did he go for the past seventeen years? Why did he leave? What did he do away from the house during his absence? Those questions were never explained and that could’ve really added some needed gravitas to the characterization of the family. One major issue that persists throughout this film could be the level of poverty in the town. Showing poverty isn’t a bad thing in itself and it could work to highlight some social issues such as Before Your Eyes, but Land and Shade comes off as poverty porn half the time which rubbed me the wrong way. It’s one thing showing the workers striking for not getting paid (which they should put their managers on blast for), but the darker elements with the houses being a few notches above being shacks was just overkill.

Land and Shade is a solid debut from Colombian director Cesar Augusto Acevedo. The family drama portrayed was really strong and it’s awesome seeing the redemption arc with Alfonso in particular. The visuals are quite detailed and powerful like the iconic burning plantation scene which is shown on the poster and DVD cover. I also noticed how silence was used to a huge degree with the only scene with music was in the bar while a radio is playing. That was creative in it’s naturalistic filming. I did have some issues with some obvious plot holes and with the overabundance of showing poverty though. Land and Shade, despite some of it’s flaws is still a good watch.

Content Warning: Land and Shade didn’t have a lot of offensive content, but the subject matter is still adult given the gravity of the situation. There’s a bit of blood where Alfonso accidentally cuts his hand, but I’ve seen just as bad or worse in PG films. Alfonso does get extremely drunk in one scene at the bar, but it’s more of the aftereffects instead of him just drinking so much on camera. There are some dark elements such as one character dying and poor working conditions with the sugar cane cutters.