From Up on Poppy Hill Review 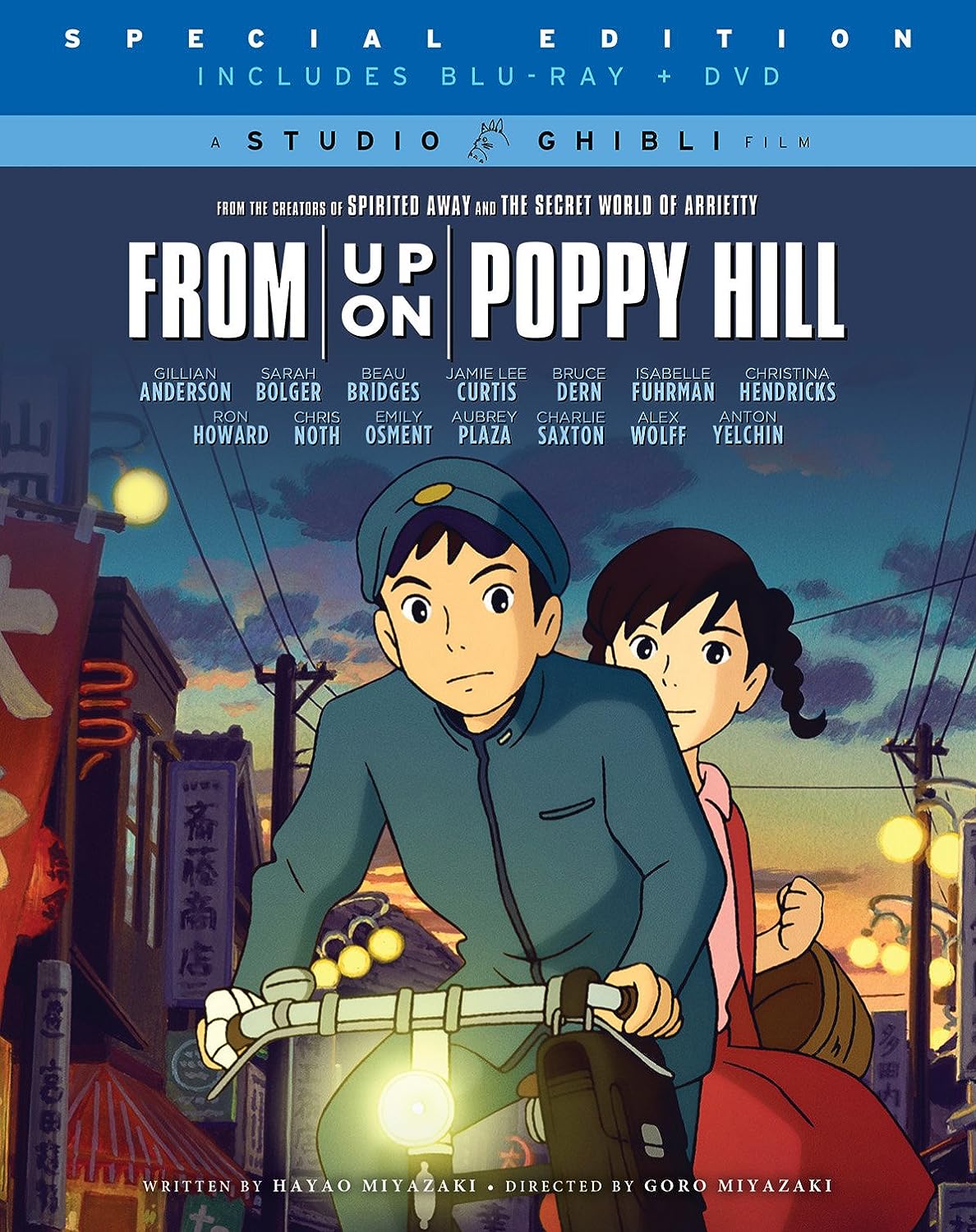 -This review contains some spoilers. You’ve been warned.
Fun Facts:
-This is the second film directed by Goro Miyazaki and his first movie in five years. Yes, as one can guess by his last name, that’s the son of Hayao. Interestingly enough, Goro’s famous father did help produce and write for this movie.

-From Up on Poppy Hill is based on a shojo manga that was serialized in 1979-1980. It was created by Tetsuro Sayama and Chizuru Takahashi.

-From Up on Poppy Hill is the first Ghibli movie since Grave of the Fireflies never to have been distributed in North America by Disney.

-Junichi Okada did the voice of Shun. This is his second time voicing in a Ghibli movie since he also played Prince Arren in Tales from Earthsea which was Goro Miyazaki’s debut film.

-Speaking of voice actors, Gen, the man who gives Shun and Umi a ride to a tugboat is voiced in the English dub by Jeff Dunham. I can’t make this up. The famous ventriloquist best known for his Achmed the Suicide Bomber puppet was in an anime.

-Language Bonus: Umi means Sea in Japanese which is all too appropriate since her father was a sailor.

-Parallel Moments: Watching Poppy Hill after Children Who Chase Lost Voices was a bit trippy. Both female main characters take care of the house all the time, cook for everyone, are high school students, their moms work in the medical profession, and they both have dead father. There’s even a male protagonist named Shun in it. Also, both movies came out the same year. To be fair, Poppy Hill is WAY more realistic and doesn’t have the same plot, but I noticed those similarities.

I have returned to reviewing another Studio Ghibli film which would make this the third time I’ve critiqued something from that famous animation studio. First was The Tale of the Princess Kaguya which I found to be a very splendid movie even though I didn’t think it was as big of a masterpiece as the critics have hailed it to be. The second film was Grave of the Fireflies which I find to be one of Ghibli’s magnum opuses despite it being one of the most depressing tragedy films, no stories ever. This would also be a bit of a different approach because unlike those previous films, I’m tackling a work from Goro Miyazaki. How well does he fare as a director compared to his dad or Isao Takahata? Let’s find out as we head back decades ago in postwar Yokohama.

From Up on Poppy Hill is a period piece dating back to 1963 Japan. There’s a second-year high school student by the name of Umi Matsuzaki who lives in a big boarding house known as Coquelicot Manor alongside her younger siblings, her grandmother, a student doctor, and an art major at a local college. She has a daily routine of cooking everybody’s meals, cleaning up the house, going to school, and the most important thing is to raise the semaphore flags each morning like clockwork (the house is overlooking the Port of Yokohama where tons of ships do business). One day at school, she finds a poem in the school paper which is supposedly about her because of it’s mentions about raising flags. There’s a boy named Shun who helps run the school paper who does stupid stunts from a dilapidated clubhouse to raise awareness as the students are protesting against the school board demolishing the aforementioned building. Despite a rocky start, Shun and Umi slowly become friends. After hanging out, both of them realize that they have an identical photograph showing three sailors. One of the sailors is Yuichiro Sawamura who is Umi’s father (Matsuzaki is Umi’s mom’s maiden name, by the way) who died during the Korean War. Shun recognizes the name and believes that’s his birth father and not the father who’s been with him this whole time. Shun tries to find out what’s true while the students renovate the clubhouse in order to sway the minds of the school brass.

The animation quality isn’t as flashy as other Ghibli films that came before and after it, but it’s still high-caliber. The movements of the characters are quite fluid and so much effort was put into the coloration, scenery, and the frames per second. I know I’ve given a pass for realistic anime projects with lesser-quality of animation, but I certainly can’t deny the effort Ghibli put into the visuals. The level of 2D animation is wonderful here. Goro has certainly taken up the animation mantle from Hayao here, so I have little complaints about the visuals. The music here was a nice change of pace from the typical Ghibli stuff. Satoshi Takebe mixed so many genres such as 60s pop, jazz, big band, surf rock at one point of the movie, and there’s even an inclusion of the original Japanese version of the song “Sukiyaki” as an insert song roughly a third of the way into the film. That was a really nice touch. I know most Americans older than me know the song because of A Taste of Honey, but I know they will definitely recognize the melody from Kyu Sakamoto’s big song.

Umi is a character was decent enough for this film. I do admire her tenacity and hard work as I would’ve never been able to pull off so many things to take care of her family and other people. One aspect of her character that I liked was the development of her slowly caring about student activism and wanting her voice to be heard. Umi’s connection with her father was certainly heartwarming. The reason why she raises the flags every day wasn’t just because of her dad’s job, but she posts the message “I pray for safe voyages” in semaphore as a way to communicate with her late father. Shun was a character that I thought would be quite stupid at first with him jumping off the clubhouse, but he becomes more likable. He’s a determined character who wants to fight for what’s right and for wanting to find out the truth. Most teenagers would be way too apathetic to have that kind of drive for wanting things to be better for the school. I know I certainly wasn’t like that.

From Up on Poppy Hill isn’t one of Ghibli’s upper echelon of movies though. While the animation is great in it’s high-quality, yet no-frills approach, I felt that the presentation wasn’t standing out compared to other films regardless if they are realistic or not. Say what you will about Grave of the Fireflies, but it had multiple iconic scenes and that was one of Ghibli’s other realistic stories. I thought the contemplative piano tracks sounded way too much like a Tenmon piece straight out of Makoto Shinkai’s older filmography (think She and Her Cat until Children Who Chase Lost Voices). I thought the subplot with the clubhouse was too cliche as it resorts to a “save our sentimental place” plot. It’s great how the chairman who wanted to tear it down was portrayed realistically instead of suffering from designated villain syndrome, but I refuse to believe that the building would still be up to code despite all the renovations the students did. The argument that the students made to keep the building was purely emotional without as much for ethics or logic. So many of the other characters besides Umi and Shun don’t get developed. My biggest concern was with Umi’s protagonist centered morality later in the film even if it got negated because of a plot convenience. WARNING! SPOILER ALERT! Umi and Shun believe that they are related by blood because of the connection of the late Yuichi Sawamura. Despite all of this, Umi confesses her love to Shun and mentions this potential sibling aspect. Seriously, Umi? Did you really want to turn this into an incestuous love tale? That says a lot of disturbing things about her and I could barely shake it off until the real revelation of Shun’s dad.

From Up on Poppy Hill had a lot of things going for it, but certain aspects really hampered my final score. The visuals weren’t breathtaking, but they certainly were of top-notch quality. Most of the music was great and fit the scenes. I thought the Japanese voice acting was well-done even though most of the actors weren’t voice actors to begin with. However, the cliched clubhouse subplot and Umi’s horrible timing of her confession of love killed this thing from getting the same score as a Princess Kaguya or Grave of the Fireflies. Goro Miyazaki has a ways to go to be like the founders of this illustrious studio.

Cons:
-Cliched subplots and plot conveniences bordering on writer cop-outs
-Underdeveloped characters besides the leads
-Umi’s questionable feelings for Shun regardless of the ending or not.

Content Warning:From Up on Poppy Hill is tame like most Ghibli movies. There are character deaths, but the bodies aren’t shown in the explosions. One scene does have breastfeeding, but it is brief and there’s no major nudity in that part. The biggest concern would be Umi’s romantic situation even after hearing that she and Shun could possibly be related.