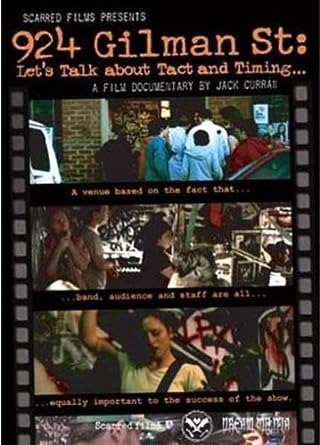 AKA: 924 Gilman St.: Let’s Talk About Tact and Timing
Genre: Music Documentary
Year Released: 2007
Distributor: Alternative Tentacles/Dream Militia/Scarred Films
Origin: USA
Running Time: 86 minutes
Rating/Recommended Audience: 15+
Related Films/Series: N/A
For Fans Of: For the Punks By the Punks, Turn It Around: The Story of East Bay Punk, Punk: Attitude, Danielson: A Family Movie, DIY or Die
Notes: N/A
Fun Facts:
-Some bands that have played at 924 Gilman St. in the past would be Green Day, AFI, Rancid, Alkaline Trio, and Chumbawamba to name a few.

-The founder of 924 Gilman St. was Tim Yohannan who also founded the Maximum Rocknroll zine. He actually died of lymphoma in 1998.

-One brief yet noticeable cameo involves none other than Jello Biafra. He’s the current lead singer of The Guantanamo School of Medicine, but he’s better known as the original singer for Dead Kennedys. Interestingly enough, this documentary was distributed by Alternative Tentacles which is owned by this punk rock veteran.

It has been a long time since I’ve covered some music-related documentaries. I do have some nostalgia being involved in independent music scenes. Going to shows, knowing bands most people haven’t heard of, and buying some merchandise from time to time. There have been some good venues and festivals that I’ve graced upon. For this example, I thought I would check out a documentary involving a legendary venue that was huge in the punk scene.

Let’s up the punx and see this little documentary.

924 Gilman St. is the documentary involved about the venue of the same name. It’s based in Berkeley, California and it’s been around since 1986 and has been going on to this day. This venue is noted for being an all-ages space, promoting shows from several independent bands from all over the world, and they have a strict policy that bars alcohol, drugs, violence, racism, sexism, and homophobia. This documents the history of the club told by current employees, volunteers, zine owners, and several musicians. A mix of interviews, concert footage, and some meetings are interwoven in this movie.

This was an interesting take on finding out about this venue. Granted, I’ve never been to the Bay Area much less the state of California, but I thought it was cool learning about the NorCal music scene in regards to DIY talent. I thought it was cool seeing the bands and the promotion of independent talent going on. The spirit of Iridium Eye would be on display albeit in musical form.  The film was loaded with so many cameos in the punk scene that it was mind-boggling. Besides the aforementioned Jello Biafra cameo in the Fun Facts section, there were also appearances from people such as Ian McKaye (Fugazi, Minor Threat, The Evens), Ted Leo, Operation Ivy, Pansy Division, Jason Webly (also of Evelyn Evelyn, a side project with Amanda Palmer), The Offspring, Rancid, and many more. It was fascinating seeing some of these bands who would end up on major labels talk about their pasts since many of them started out at this venue. I do admit that it was surreal seeing Against Me at the end since this was filmed back when lead singer/guitarist Laura Jane Grace was Tom Gabel, and I’ll leave it at that. If you like punk rock, you’ll definitely have a treat seeing all the cameos and interviews over there.

924 Gilman St. does unfortunately hit some wrong notes. While there were some great things said about the venue, it came off as propaganda more often than not. It doesn’t mention the time it was briefly closed down in the late 80s or any incidents that happened there. Outside research of this documentary allowed me to see that not everything was perfect like what happened to some of the musicians or less-than-savory things that management has done. Also, I wished there was more genre representation besides just punk rock. Besides the solo artist Jason Webly or Atom and His Package (okay, that solo artist is electro-punk, but still…) I couldn’t think of many others outside of that genre. It would be cool to see other kids of music there. For a venue who doesn’t tolerate racism, I didn’t see that many minorities in the video. Sure, there was the Japanese band DSB and the Brazilian band Dominatrix, but others were very few and far in between. The video production was unimpressive. I can handle a ton of cinema verite and neorealism, but the production could’ve been better especially since there were multiple camera men in the credits. I could’ve made something like this as a one-man operation if I had the time. Also, the live audio production was just mediocre and not mixed well.

This punk rock documentary was alright, but I would’ve liked to have seen more effort put into it. 924 Gilman St. had some good insight into the local scene and it was great how it was able to get some attention. The punk genre is very well-represented and it was amazing seeing appearances from all these bands throughout the film. However, I thought the narrative was slanted as something too positive to the point of sycophancy. The production could’ve been so much better even if it didn’t need a big budget. 924 Gilman St. does have some historical value, but I’ve seen better documentaries with similar subjects.

Pros:
-A great plethora of punk rock cameos
-Fun historical facts about Gilman
-Inspiring for the DIY community in music

Content Warning: 924 Gilman St. would be better suited for older teens and up. The language gets quite strong throughout the film. Some people casually talk about people using illegal drugs or doing stupid things. Those who are more conservative might take issue with the appearance of Pansy Division who are known as a forerunner of the “Queercore” punk movement (the band has members who are openly gay) and their drummer in that scene is clearly in drag.