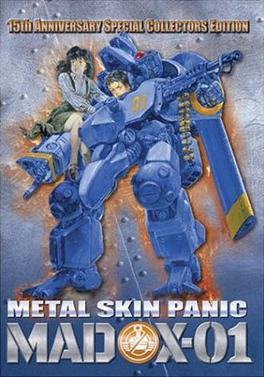 -Hilarious in Hindsight: This OVA was produced by Hideaki Anno. Yes, THAT Hideaki Anno. Isn’t it kind of funny that he worked on an anime with a guy named Shinji? You know, like the main character of Evangelion? I’m just saying. Also, MADOX Unit 00 is a blue robot. Kind of like EVA Unit-00, right?

-Kouji is played by Yasunori Matsumoto. You might know him for being the voice of Gourry from the Slayers series, Jean Havoc from Fullmetal Alchemist, and Anubis from the Jojo’s Bizarre Adventure remake.

I needed a shot of some old-school anime. I think focusing on only the new stuff is counterproductive as an anime reviewer. One has to be exposed to both the new and the old for any critic to be worth their salt. I went back to the 80s for this one as I decided to critique a short one-shot OVA from legendary distributor AnimEigo who is one of the oldest US anime companies that’s still active to this day. Here, I take on a bit of a quirky mecha anime.

Metal Skin Panic MADOX-01 deals with an experimental mecha suit. It’s armed to the teeth with guns and scanners around that are used by the US Army and the Japan Self-Defense Force. After being tested, it accidentally falls out of their hands before it goes into a service shop. There’s a mechanic named Kouji Sugimoto who finds the MADOX suit in a box. He reads a bit of the manual, but he ends up not only inside the mecha apparatus, but he is also literally stuck inside this mobile weapon. The suit is activated and gives Kouji a joyride through Tokyo. However, he comes under the cross hairs of First Lieutenant Kilgore who wants to destroy the MADOX unit out of spite after losing a virtual reality mock combat exercise against the machine. What’s Kouji to do? All he wanted was to see what MADOX was like, yet he also wants to see his girlfriend Shiori before she leaves to study in England.

This was a fun action romp and I do admit to laughing a few times. There weren’t that many mecha media back then that used humor as the main point. It doesn’t go full-on parody, but there’s a decent amount of levity there. It was funny with Kouji getting taken for a ride with the machine, not fitting in some spaces, and even trying to eat ramen or bento dishes while still inside the robot which was funny. The fact that he didn’t read all of the manuals did add to some of the comedy even when the situation.

Kouji was a decent enough character. We get to know his job and him trying to get the money to go to a good school while also being forced to be brave. Another good character is Ellie Kusumoto. She was a bit of a progressive character given the times since she’s the main robot pilot who’s very competent at being a soldier when there weren’t that many female mecha pilots around in a leadership position in her platoon. The villain Kilgore was a threatening bad guy who’s all too eager to slaughter anyone while seeing anywhere as a war zone as he drives around a tank (even including going up the stairs with one) to shoot anyone in his path.

MADOX-01 was a fun action romp, but don’t expect it to be full of depth. For starters, this was made in the 80s and it shows. The hairstyles, animation style, music, and some dated artifacts such as payphones are fully on display. Even a brief conversation in the army about thinking there was an attack from the Eastern Bloc dates itself as it’s an obvious reference to the former Soviet Union. There wasn’t a lot of background outside of Kouji, Ellie, or Kilgore as the other characters as they are more or less one-shot characters. Kilgore is definitely a walking US military stereotype that could only be made from a creator outside of America. He’s definitely an example of “obvious villain is obvious” where he likes slaughtering things almost to the point of orgasmic bliss. Come on, his name isn’t even a subtle pun since it sounds like “kill” and “gore” even if it is a real surname. There was also rampant broken English on some of the menu screens and instruction manuals which I found laughable because the MADOX units were American property. You would think they would proofread that stuff, but that’s not the case.

Metal Skin Panic MADOX-01 isn’t a compelling OVA, but at least it’s mildly entertaining. The concept of someone getting stuck in a mecha suit was funny. I liked how it subverted the notion of a pilot being born in a cockpit as Kouji was forced to learn on the spot while trying to control the MADOX unit. AnimEigo’s subtitling work with multi-colored fonts, accurate translations, and cultural notes was all phenomenal. It’s no wonder that the company has been praised for its translation efforts for decades. However, the premise is a bit shallow when all is said and done like the same action blockbusters that came out the same decade as this OVA. MADOX-01 is good for some laughs and action, but nothing further than that.

Pros:
-Incredible subtitling and translations from AnimEigo
-Funny situations with Kouji and the MADOX unit
-Doesn’t overstay its welcome

Cons:
-Dated animation and music
-Lack of character development besides Kouji and Ellie Kusumoto
-Plot holes with the army subplot

Content Warning: MADOX-01 is alright for teens and up. The action involves a ton of explosions, but nothing that’s gory. There is one death scene that’s tastefully handled in its genre-savviness. The language gets surprisingly strong later on and there are two cases of characters flipping the bird. Interestingly enough, one of those times involves Kouji using the mecha to do that gesture which was a bit funny. Ellie does have some brief fan service, but it wasn’t that big a deal.