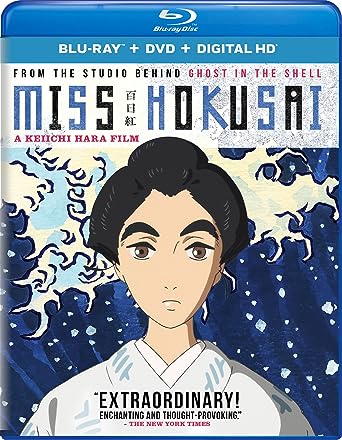 -Miss Hokusai is based on a manga which was a fictionalized account of these painters by Hinako Sugiura and was serialized from 1983-1987. Interestingly enough, she also wrote a manga called Higashi no Eden (Eden of the East) which is unrelated to a very certain anime series that Production I. G. would create decades later.

-Hilarious in Hindsight: Very early on in the film, Hokusai shows off his painting abilities no matter how big or how small his canvas is. One brief scene involves him painting two birds on a single grain of rice. If he lived in modern-day Portland, he would make a killing doing that. Why? I have five words for you: PUT! A! BIRD! ON! IT! The people in Portlandia would be ever so proud of him.

-O-Ei is played by Anne Watanabe. She was also in the live-action TV remake of xxxHolic where she played Yuko. Also, she’s the daughter of Ken Watanabe whom Western audiences might know as Saito from Inception, Drift from the live-action Transformers movies, and he voiced the head surgeon in Wes Anderson’s animated film Isle of Dogs.

-Director Keiichi Hara is known for his work on several Doraemon media, Colorful [2010], and even Crayon Shin-chan of all things.

Art is a subject that could work in film. Sure, I can’t paint or draw worth a crap, but I certainly appreciate those who can. People will certainly make references to Art School Confidential or that one scene in Titanic, but I like things that expand upon that subject. After researching elements of the film I’m about to review, I certainly felt stupid for not knowing about this Japanese painter or his family. You see, Impressionism is one of my favorite art movements when it comes to paintings. I own multiple art books of people in that field.

Of course, one anime movie just had to educate me a little bit. Thanks, Production I. G.

Miss Hokusai takes place in 1814 right in the heart of Edo (one of the cities that would eventually become modern-day Tokyo). There’s a woman named O-Ei who is following her father Tetsuzo’s AKA Hokusai’s footsteps in being a painter. The thing is Hokusai literally paints all day in some random domicile studio while O-Ei either “finishes” his incomplete paintings or tries to paint by herself, but she never puts her name on her works despite inheriting her father’s technical prowess. She also has a little sister named O-Mao who was born blind and hasn’t been around her own father in a long time which causes her to wonder if he hates her. Some other local painters by the names of Ikeda Zenjiro and Utagawa Kuninao join up to pick Hokusai’s brain and the latter has a crush on his daughter. O-Ei wants to be seen as a great painter as well, but she has her own problems with her family life and her technique going unnoticed.

This was an unlikely plot element for a drama. I had heard of this movie in passing, but I didn’t know that much about it. O-Ei had redeemable characteristics like her sisterly bond with O-Nao, wanting to improve as a painter, and also not willing to take crap from anyone. However, I also liked her flaws in how she has a hard time making her own original paintings that don’t involve finishing her dad’s works, has no “emotional aspect” in her paintings, and is too distant around others. Hokusai is a phenomenal painter, but the problem is his own fears involving his lack of involvement with his younger daughter O-Nao’s life. It was quite tragic as O-Nao wonders about her father’s absence even to the point where she thinks she’s going to hell. It’s revealed that Hokusai doesn’t want to deal with sick or dying people out of pure fear. I’m glad there was some development between the family members involved.

Miss Hokusai does have some faults in the anime. While the animation is done competently by Production I. G., I was underwhelmed by the production. The 2D animation was just fine, but the CGI didn’t mesh with the rest of the animation such as a bridge and some of the houses there. I also thought the aesthetics borrowed way too heavily from Ghibli than from Production I. G. While not as blatant as Children Who Chase Lost Voices, I couldn’t help but feel like I was watching one of Ghibli’s more recent films. The music score got way too anachronistic at times like having some 70s rock music playing in some scenes or one dramatic scene having distracting synths underlying some violins. The pacing felt jumbled like a bunch of scenes being thrown together with characters popping up. The supernatural elements were quite awkward. I could understand the scene with the woman suffering from delirium associated with a painting of hell, but the other stuff felt out of place like the dragon or that spirit exiting the geisha’s face. The film did get boring for me later on which is a shame because I didn’t want to be bored watching a movie like this.  This period piece wasn’t as much of a masterpiece as others have hailed it to be.

Miss Hokusai did have an intriguing concept, but the execution wasn’t always on the mark. O-Ei was an interesting main character who is well-rounded with strengths and weaknesses, but not everyone was as dynamic of a character as she was. Production I. G. dropped the ball over here on this one with some lackluster CGI besides above-average animation. The pacing issues did affect the story by making it feel like a patchwork of random scenes instead of something more cohesive. Miss Hokusai could only be slightly above average for me.