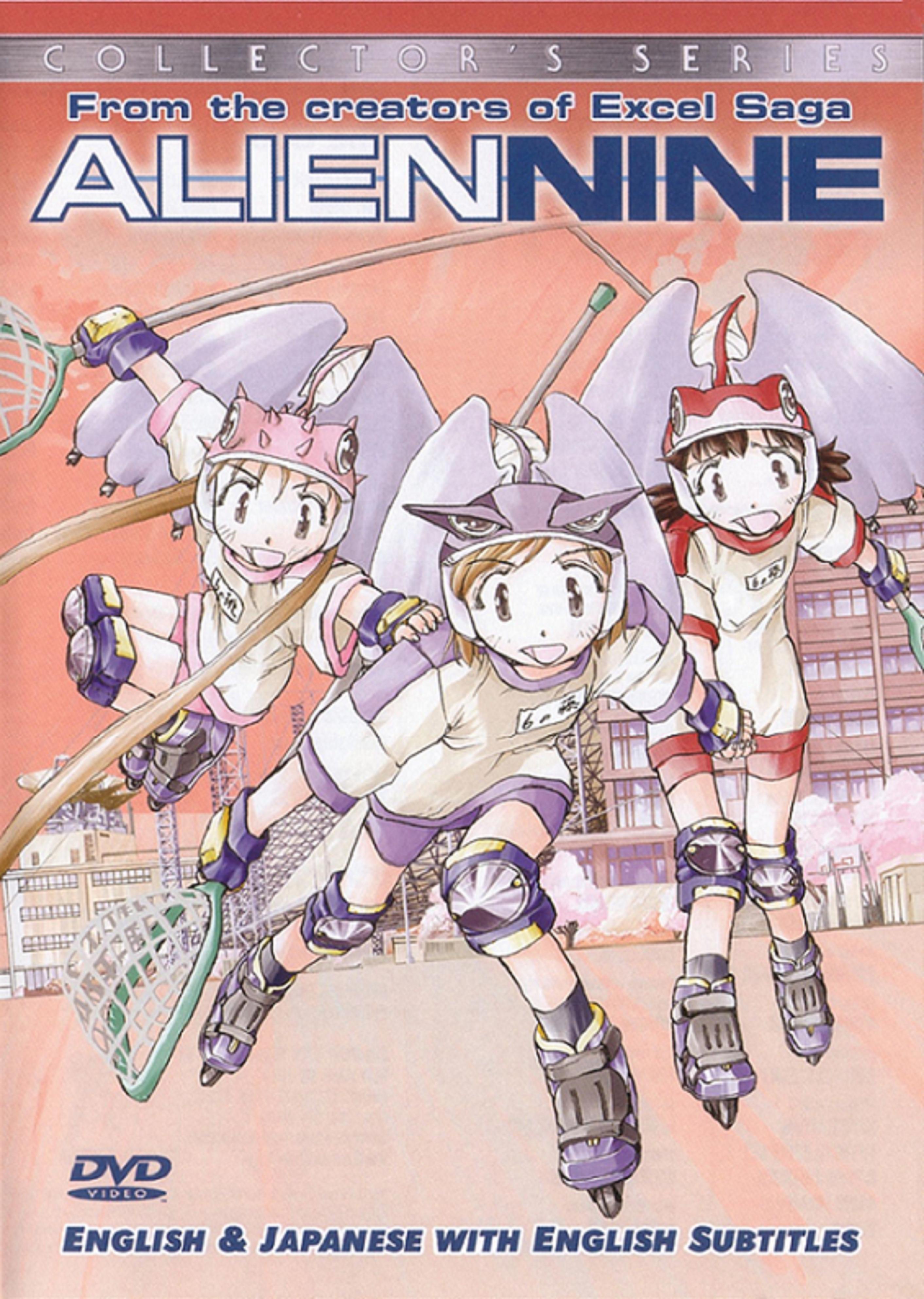 AKA: N/A
Genre: Sci-Fi/Dark Comedy/Slice-of-Life
Year Released: 2001-2002
Distributor: Unlicensed (DVD formally available by Central Park Media)
Origin: Japan
Running Time: OVA, 4 Episodes, 30 minutes each
Rating/Recommended Audience: 16+
Related Films/Series: N/A
For Fans Of: Shadow Star Narutaru, Last Girl’s Tour, Puella Magi Madoka Magica, Yuki Yuna is a Hero, Bokurano
Notes:
-The Japanese language track was used for this review.
Fun Facts:
-Hilarious in Hindsight: Those Borgs in the Japanese version of Alien Nine have been voiced by someone who’s played an alien before. Wouldn’t it be crazy if said voice actor played an alien character who also is one of the biggest anime villains ever? Oh, wait. It’s none other than Ryuusei Nakao, the voice actor of Frieza from DBZ himself!

-Nerd Bonus: In episode 3, Yuri wears a swimsuit that says DS9 on it. Could this be a reference to Star Trek: Deep Space 9? Also, the Borgs certainly have the same name as those species that proclaim resistance is futile.

-Alien Nine is the directorial debut of Yasuhiro Irie. Even though he wouldn’t direct this OVA until the 2nd episode, he did direct the rest of this series. Irie has also been in charge of Kurau: Phantom Memory, Scorching Ping Pong Girls, and this one anime series you’ve probably never heard of called Fullmetal Alchemist: Brotherhood. Funny how life works for anime directors, eh?

-The creator Hitoshi Tomizawa has also adapted Battle Royale II into a manga.

It’s been a really long time since I reviewed anything because of my long hiatus. Life has certainly happened to me as it’s been a whirlwind of working, teaching, writing books, publishing said books, and even getting educated myself to help further my career. This has gone on for too long, and I do apologize to the few of you that care about my little blog where I review mostly obscure movies, anime, and documentaries. For this entry into Iridium Eye, I decided to watch a little-known OVA that I remember seeing years ago.

Insert cliche of something being out of this world for this anime.

Alien Nine takes place in an alternate 2010s timeline where aliens have been discovered and have been invading earth. There are schools that feature alien clubs that are responsible for quelling these invasions by having student capture these extraterrestrial beings to keep the community safe. In this particular case, these alien clubs involve sixth graders trying to save their schools. One cowardly girl named Yuri Otani gets voted into her local school’s alien club because no one else in her classroom wanted to take the mantle. Sure, alien club members get to skip class and homework during invasions and infestations, but they have to subdue these creatures with guns, lacrosse sticks, roller blades, and symbiotic aliens called Borgs that can sprout wings, fire tendrils, and can act as shields for their users. The other two students in the school’s club are Kumi Kawamura, who’s a no-nonsense girl who’s extremely independent and there’s Kasumi Tomine who’s a perky rich girl who happens to excel at every activity she does (saying nothing about her volunteering for the club without a vote). They’re lead by teacher Megumi Hisakawa who oversees their progress, but she has her own ulterior motives for leading this particular club.

This was certainly a unique albeit a dark concept from what I remember. The art style will certainly throw people off with the contrast of what’s going on. These character designs are very simplistic, but this anime is full of adult subjects and not to mention that it’s really gory (okay, it’s mainly green alien blood, but still…). However, I do see some merit in showing how these girls are forced to grow up as they’re in dangerous situations in protecting each other and the school from all these alien attacks. The art did get a bit moe-blobbish at times, but I would bet you money that if this came out a year or two ago, Alien Nine would get more attention. Besides, Last Girl’s Tour’s art direction TOTALLY looks like Alien Nine’s, so I wonder if those creators were inspired by this anime. While there’s a bunch of violent situations, it’s not on the level of let’s say a Takashi Miine work or Battle Royale. They even calm things down with a beach episode which surprisingly wasn’t filler since it lead to legitimate character development and transitioned into the final conflict in this series.

The characters certainly have enough personality to get the viewer’s attention. Yuri utterly despises her job in the alien club, but I don’t think anyone could blame her as she was forced in this position. She becomes incredibly afraid of her position and needs her teammates to bail her out early on, but I do appreciate how she was called out on her cowardly nature by Kumi. Speaking of which, Kumi certainly has a tragic backstory with her father already dead before the start of the series. She doesn’t want to be nice and is good at capturing aliens, but even she has her own insecurities that get revealed later on as she eventually becomes a friend to Yuri. Kasumi was a character who I thought was going to be a Mary Sue like some younger and perkier version of Olga Pataki from Hey Arnold!, but I was a bit surprised. She is considered to be the top alien club member and has set records in capturing aliens, but her fatal flaw becomes apparent in the final episode which destroys her Mary Sue status in a very disturbing way that breaks her genki girl psyche. The Borgs certainly had their own personality with Yuri’s being quite snarky, but is sworn to protect her even if it means killing any alien in self-defense.

Alien Nine has unique things going for it, but I don’t consider everything to reach the levels of being a successful mission. For starters, the animation cuts corners and the CGI tendrils are quite dated. It’s a shame because I know J.C. Staff has done so much better than this in other productions. I wasn’t a fan of the opening theme with it’s way too perky J-Pop aesthetics. There’s also many plot holes and the anime doesn’t finish the whole story, but just one major arc from the manga (which I have heard was released in English, too), so the ending leads to so much more even while looking at the bonus images during the credits. The biggest thing that really made my skin crawl was a disgusting aspect of the Borgs. The Borgs need to feed on their hosts to survive and one way they do it is by licking sweat from their owners. It’s nasty even though it’s only shown in the first episode, but it really disgusted me much like how the alien club members were as they dealt with that issue.

Watching this OVA again after not seeing this anime in years did help me remember some things, but I certainly wouldn’t say it was some end all be all anime. The dark sci-fi concepts intentionally clashing with the simplistic and colorful character designs did work for this OVA. There was some good character development with some of the main characters and there were decent surprises for most viewers. The music (besides the opening theme) was good in it’s bizarre scoring. However, I wasn’t a fan of the incomplete story and the creepy implications with the Borgs despite that brief scene. Alien Nine certainly had uniqueness and potential, but not all of it was realized. There was more good than bad in this anime though, but not a masterpiece.

Content Warning: Alien Nine may look like some kiddy anime like Pokemon, but don’t be fooled. Central Park Media was wise enough to give this a 16 and up rating when they had the license to it. Alien Nine gets very bloody as various aliens get shot, ripped to shreds, have their entrails out, and face all types of mortal injuries. There’s disturbing imagery like how one character gets eaten by a giant alien and protrudes from inside it’s stomach or how the Borgs lick the sweat from the alien club. There is some nudity, but it’s nondescript and nonsexual though. One aspect that will be lost on younger viewers is how traumatized the girls become during the alien hunts or how the alien club members are child soldiers fighting for the school board even though the girl’s don’t know about it or why.