Mary and the Witch’s Flower Review 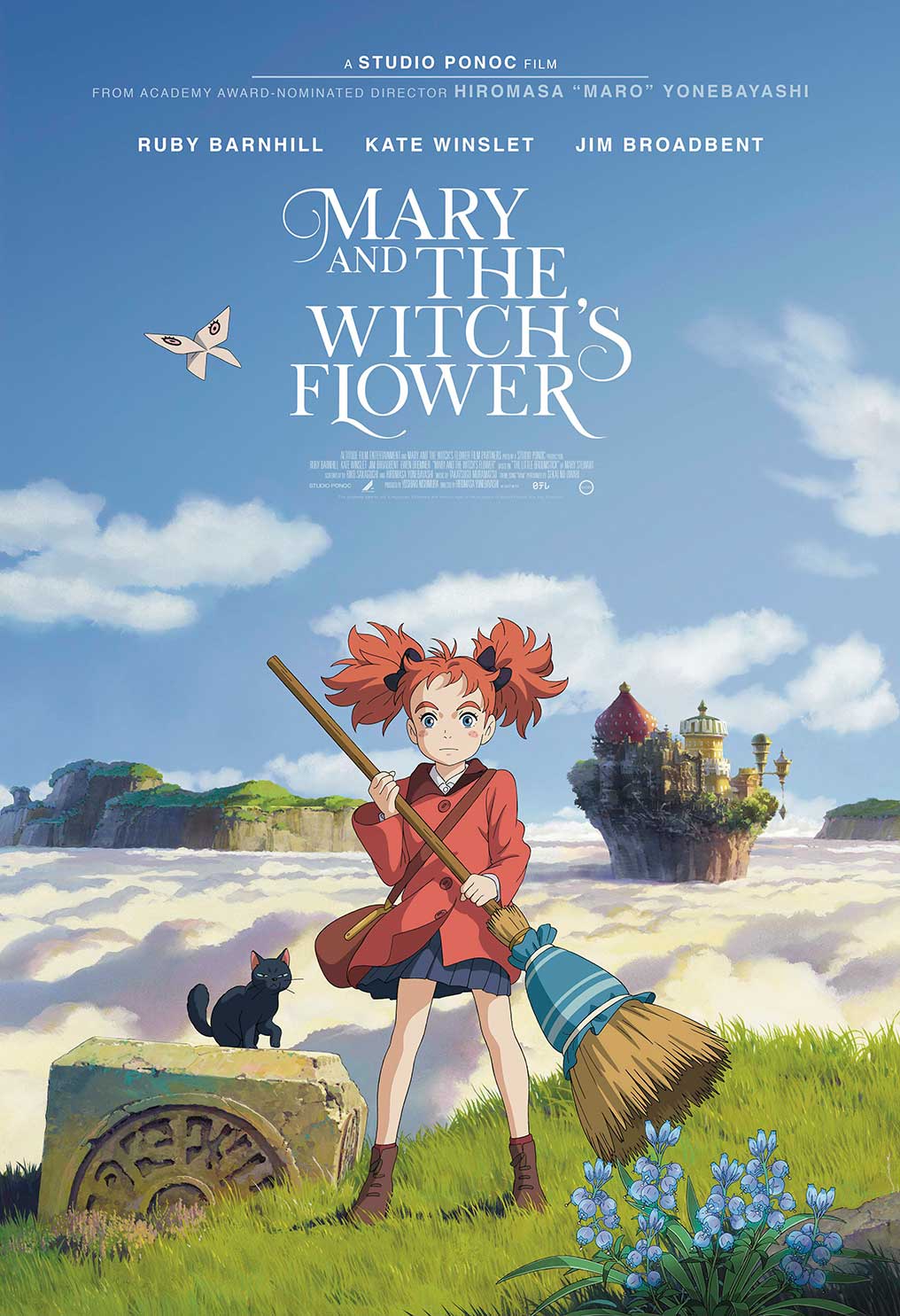 -Speaking of Hiromasa Yonebayashi, he was the youngest person to direct a Ghibli film at the age of 37 with The Secret World of Arrietty during his tenure at that studio.

-Mary and the Witch’s Flower is based on a book called The Little Broomstick which was written by British author Mary Stewart (notice her first name in regards to this film).

I’m often lost when it comes to newer animation studios. It seems as though many of them have popped up this decade or some of them I just haven’t paid that much attention to such as White Fox, Wit Studio, A-1, or Trigger (Leave me alone, otaku!). One studio that did get my attention was Ponoc (pronounced Poh-noche). At the time of this review, they’ve only made two films, but they certainly got notice since it was made by ex-Ghibli employees. Since Ghibli are such the critical darlings with both anime fans and film buffs, they would certainly get noticed once they would release their debut film.

How well does this debut work for Ponoc?

Mary and the Witch’s Flower takes place in the British countryside and the main character in question is Mary Smith. She recently stays in her Great Aunt Charlotte’s house, but she has trouble adjusting to this area. Mary has no friends, is too clumsy for her own good, and feels that she’s useless despite wanting to show that she’s adept. One day, she discovers a mysterious flower called the fly-by-night from a local gardener and eventually finds a broomstick that can actually fly as she follows Peter’s cat (one of the boys who teases her). Mary finds herself far away to a place called Endor College which is an elite school for magicians. She meets the headmistress Madame Mumblechook who gives her a campus tour where she’s exposed to magic-infused technology rivaling that of sci-fi movies. Mary tries out some spells which cause Mumblechook and her associate Dr. Dee to believe she’s the ultimate magical prodigy. Things start out interesting until Mary discovers a hidden magic book that belongs to the headmistress. Mumblechook finds out about Mary knowing about this book and her feelings toward the girl change. Back home, Peter is kidnapped and the only way to get him back is to go back to Endor.

This film certainly has some interesting things that caught my attention. I know Mary can start out as a typical clumsy heroine for several viewers, but she was likable enough to root for as a protagonist. I do share her feelings of wanting to prove my worth to everyone else even when things go wrong. She does develop into a better heroine later on which I certainly appreciated. I also enjoyed the soundtrack of this film. Sure, I didn’t expect to hear so much hammered dulcimer, but I really liked the score and that instrument was certainly unique while being featured. The animation was certainly fluid which is to be expected from ex-Ghibli animators and they were certainly competent with the technical aspects of the visual to make sure everything flows in this movie. The magitech aspects certainly looked great and surreal like some PG version of Paprika.

While Studio Ponoc put the effort into making sure things look good and sound good, I wish I could say the same for the rest of this film. There were plot holes with the world-building and there was no development for anyone in Endor besides Mumblechook and Dr. Dee. I also found a whole heaping of unoriginality going on. Mary and the Witch’s Flower was like an anime attempt at making Harry Potter and other things. The fact that there is a Philosopher’s Stone didn’t help matters (one can also insert a Fullmetal Alchemist joke for that situation). Even Endor College was like a mix between Hogwarts, Redwall, Narnia, Agartha from Children Who Chase Lost Voices, and even Angel Island from the Sonic games. Some plot points were so predictable like Mumblechook having devious plans for Mary. Another predictable aspect that I called long before it happened was the revelation of who the original red-haired witch was. As soon as one character picked up the flower and knew what it was, I instantly called it. They even resort to resurrecting tears like that cheesy scene from Pokemon: The First Movie in the third act which was facepalm-worthy.

The biggest aspect that hurts Ponoc as a studio is that it’s trying WAY too hard to be like the founders’ former company. The movie even starts out with a static title shot of their company which might as well be Mary replacing Totoro as she faces to the left. The character designs and animation style while still high-quality still looks like Ghibli. I really would’ve liked to have seen more effort to really differentiate themselves from Miyazaki’s shadow and try to carve their own identity. Say what you will about studios such as Pierrot, Sunrise, or Madhouse. Those companies got started by ex-animators from different studios and made themselves look and feel different from their original employers.

I just found Mary and the Witch’s Flower to be an average debut for a new studio. There are things to like such as the animation quality, music, and Mary as a character. I’ve certainly seen much worse in terms of fantasy, but I didn’t see this movie moving the needle in that genre. I felt that the film was hindered by unoriginality and by playing it safe by mimicking Ghibli more than trying to be more unique. Ponoc is still new and I want them to do good things, but Mary and the Witch’s Flower didn’t feel so magical to me when I watched it.

Content Warning: Mary and the Witch’s Flower is a safe watch for families like a good portion of Ghibli movies. There is magic used, but it’s closer to Narnia than anything really occult-like in my opinion. There are some disturbing implications as there’s human and animal experimentation done by Mumblechook and Dr. Dee. One flashback even reveals that a child even died during one of the original experiments which is the darkest moment of this film.