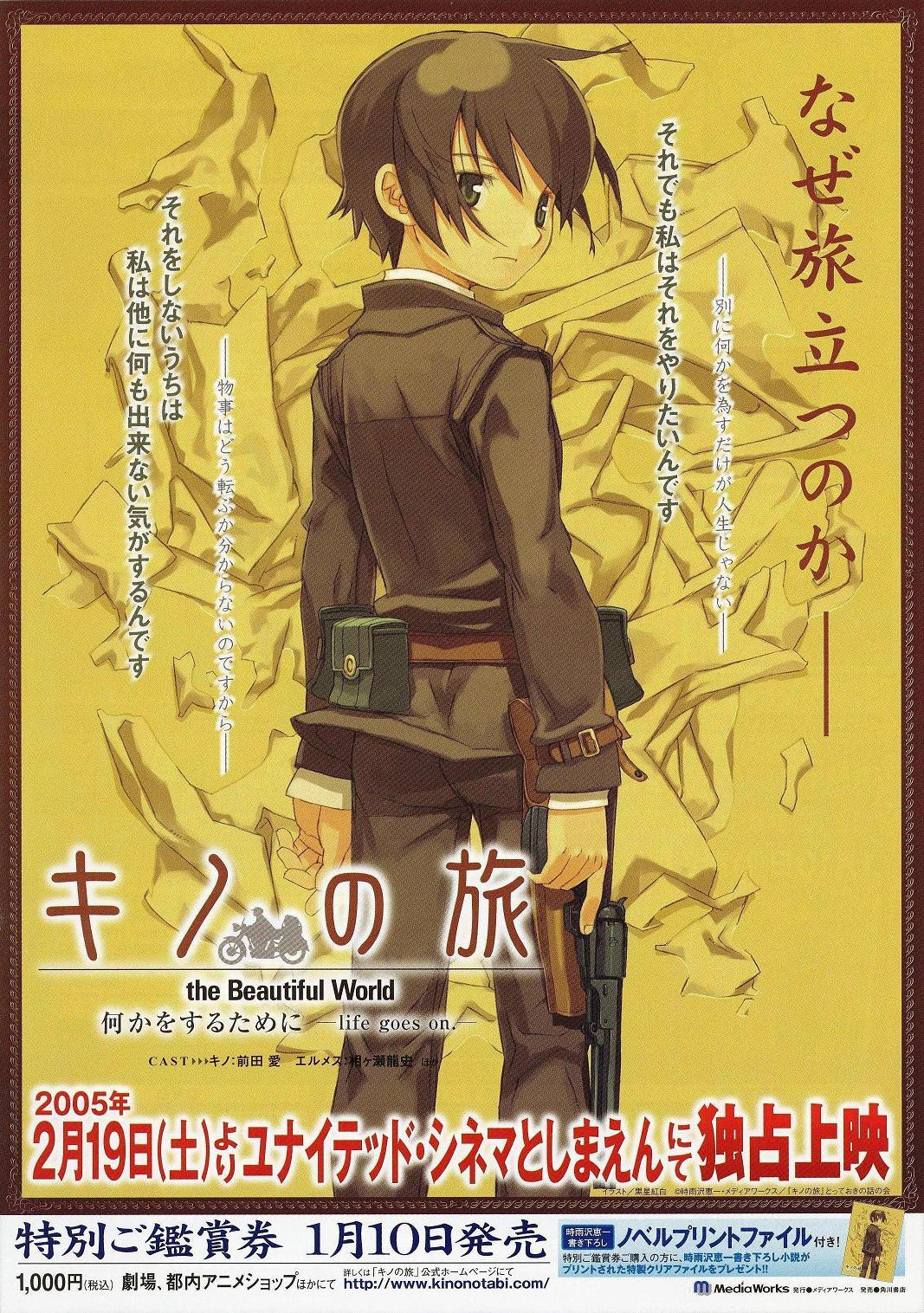 -Watching at least the first four episodes of Kino’s Journey is strongly recommended before watching this film. This movie contains a major spoiler involving Kino’s backstory in the TV series which becomes a huge plot point in this film. You’ve been warned. [2022 update: The spoiler involves the revelation of her being AFAB and I will use both she/they pronouns when talking about Kino.]
Fun Facts:
-Life Goes On was directed by Takashi Watanabe. You might know him for his directorial work in the Slayers series, Shakugan no Shana, and Rave Master to name a few.

-Hilarious in Hindsight: Any of you who have seen the original Kino’s Journey series knows that the title character got her name from the original Kino who was briefly a mentor to her and was the main reason they started traveling. It seems as if Kazuhiko Inoue has a habit of playing characters who are mentors, teachers, or older role model figures for other protagonists since the 00s since he has also voiced Kakashi from Naruto, Kisuke from Bleach, Ryuji from Children Who Chase Lost Voices, and Nicholas Santos/Ninzaburo Shiratori from the Detective Conan/Case Closed series.

-Fandom Bonus: Could that little comment about seeing a trailer delivering goods be foreshadowing the events in episode 2? Be afraid, Kino. Be VERY afraid.

Looks like I’m returning back to an anime series I’ve known for a long time. Kino’s Journey was certainly a great watch and I’m thankful to have been able to buy the re-released DVD box set last year to immerse myself into that world. These stories have been great to rediscover and the philosophical element really intrigued me even with the episodes I thought were just okay. I eventually remembered how there were more entries into Kino’s world after the original TV series, but before it ever became remade back in 2017. Side note: I will not be checking out said remake and I made it clear in my review of the original Kino’s Journey TV series. Now that I’ve gotten that out of the way, I think it’s as good a time as any to see another journey from our gunslinging, knife-wielding, philosophizing, motorrad-riding traveller.

What journey befalls us in this beautiful world?

Kino’s Journey: Life Goes On takes place sometime earlier in the title character’s life. She’s getting acclimated to being under Master’s tutelage and has constantly trained to be a sharp marks-person and traveler. There are even flashbacks of Kino starting out training after she adopted the name from her late original mentor and even still wore her original dress from back in her hometown. There gets to be an issue later on where Master is refusing the offers to deal with a certain individual, but Kino eventually offers to see what is going on with this person. They meet this woman who lives alone in a small house who seems pleasant and waits for her son to come back home from traveling. However, Kino puts the two and two together as to who her son could be and realizes that the woman isn’t what she seems.

This was certainly a film that expanded more on Kino’s backstory and character. It was fascinating seeing how there were time flips between the traveler that the fans know of, but also seeing them back when she was a scared and girly individual who has trouble learning how to survive. Seeing this film and knowing how Kino would end up was certainly an eye-opener. I really liked the subtle changes in her dialogue as a way to carve out her own identity with the biggest indicator of how she says “I”. Granted, this is a Japanese film, so for those of you not familiar with the language, there are multiple ways of saying “I [am]”. Kino herself starts out by saying “Atashi [wa]” which is the feminine form of saying “I [am]”, but throughout the TV series and later on in the film, they switch to “Boku [wa]” which is the masculine way of saying the same phrase in that language which certainly reflects their tomboyish and androgynous appearance. I also thought the animation was good over here. Granted, it’s nothing better than the TV series, but even that was above average in the animation department. The music is still on the level and they do repeat the original theme song “All the Way”, but that’s certainly not a bad thing since I do like that song. The plot twist in the episode involving that mysterious woman was certainly well-done even if one aspect was a bit predictable though. I will not spoil it, but things do get a bit insane near the ending almost like a Satoshi Kon film. Those were some good strong points of Life Goes On.

While Life Goes On was a good addition to the original Kino’s Journey canon, I can say that there were some road bumps on said journey. Starting with the animation, it’s a double-edged sword. It’s not bad, but because it’s a theatrical release, I really wished they could’ve stepped their visual game up to look more like a film instead of a lost TV episode. The time flips between the past and present could throw some people not familiar with the TV series off and watching the whole thing would be required to get some of the plot elements, so this isn’t for newbies. While the music was good, I wish they could’ve diversified the score a bit more and the new ending theme by Ai Maeda (Kino’s VA) was just mediocre and didn’t hold a candle to the previous ending theme “The Beautiful World” which she also sang. The philosophical elements are a bit toned down which can be a bit of a turn-off given how reliant Kino’s Journey typically is with that element being a huge motif.

Kino’s Journey: Life Goes On was a solid, if not spectacular short film. I liked how relevant it was to the original series instead of something that was just filler (see: several movies associated with Shonen Jump anime series). Seeing Kino’s backstory fleshed out a bit more was a nice touch and I liked the subtle elements in how she tried to find her identity. The animation was alright but could’ve improved given the theatrical release of this short film, and I did think they were on cruise control when it came to the scoring. Kino’s Journey: Life Goes On may not have packed as much of a punch compared to some of the better episodes in the TV show, but it’s certainly worthy enough to watch if you’re a fan of this media property.

Adjustable Point System:
Add 1 point if you’re a fan of Kino’s Journey (2003).
Subtract 1-2 points if you aren’t a fan of philosophy in anime.

Cons:
-Feels like a TV episode and not a movie
-Mediocre ending theme
-Not as philosophical as most Kino episodes

Content Warning: Much like ADV’s original rating of Kino’s Journey, I would recommend this to people 15 and up. Things do get violent and bloody like the brief recap of the original Kino getting murdered in the title character’s home country and also in the fight scene in the final act. There are disturbing implications where one adversary has psychosis and happens to be a mass murderer which is mentioned by some of the other locals.

All photos used under US “Fair Use” laws. Kino’s Journey: Life Goes On is property of Keiichi Sigsawa, Kouhaku Kuroboshi, Takashi Watanabe, and ACGT. The movie poster is from IMDb and is property of ACGT.