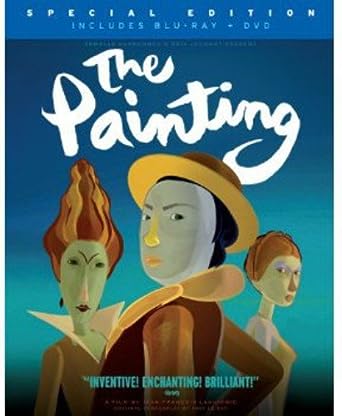 -The character species will be addressed under their English names shown in the subtitles and the dub.

-There are spoilers in this review. Reader be warned.
Fun Facts:
-The Painting was directed by Jean-Francois Laguionie which is his first hybrid animated/live-action film. His animation career dates back all the way to 1965 when he created the short film The Maid and the Cellist.

-Anime fans, does anyone recognize Magenta’s dub voice? He’s played by Spike Spencer. Yes, Shinji Ikari from Evangelion is somehow in a French film playing a soldier painting. Really. He’s not in a position to say that he can run away.

-The animated portions of the film were done in digital 3D.

-Hilarious in Hindsight: It is hard for me to see the part where the purple paintings are attacking the protagonists and not think about the song “Start Wearing Purple” by Gogol Bordello. I’m just saying.

Oh, GKIDS. You seem to have racked up some 10/10s from me over the past year even if some of them were based on technicalities. There was Perfect Blue which is easily one of Satoshi Kon’s best films and easily one of the best directorial debuts I’ve reviewed so far. Next was the Spanish film Wrinkles which is the only Western animated project that’s received the highest score from me. Then, there was Grave of the Fireflies which I currently have to credit GKIDS for since they got the license from Sentai Filmworks, so they now own every Ghibli film not named The Wind Rises. That company has been seen as a major taste-maker in bringing animated films outside of the creations of Disney, Warner Brothers, Dreamworks, etc. while bringing them to the masses. They’ve certainly distributed movies I definitely enjoy, so I wondered how one of their French imports would fare when I caught a glimpse of that film.

Is it a masterpiece? Let’s find out.

The Painting takes place across what the title would address. There’s a world literally inside a painting that was abandoned by an individual known as The Painter who appears to be a god-like figure. While The Painter is missing, there’s turmoil among three different groups. There’s the Alldunns (yes, a single one is pronounced “All Done”) who are the elite class of society living it up in the fanciest chateaus and mansions. There are the Halfies who are only partially colored painted people who are second-class citizens in this world. Finally, there are the Sketchies who as their name would imply are sentient rough sketches and they are the untouchables in this caste system. An Alldunn named Ramo manages to fall in love with a Halfie named Claire who happens to be mostly colored in beside her lips and eyes. Their romance is forbidden of course, and the Alldunns shun the Halfies and Sketchies while resorting to killing one of the latter. Ramo, Claire, and their Sketchie friend Gum have to venture out into multiple paintings to find the Painter himself to finish the work.

There were certainly some really unique things about this film. While I’m not a huge fan of CGI-based animation, I will say that the production was good and certainly creative. There were so many quirky designs with all of these characters while also playing around with various art styles depending on the world such as classic art, impressionism, baroque, and other forms. The detail in the animation and backgrounds certainly had so much effort going for it. Blue Spirit Studios certainly deserves credit for the visual aspects of this particular film. Even the music that was used was never too bombastic and also fit in several of the scenes in this particular film. One character that I found to be the most interesting despite being mostly comic relief was Gum. He’s one of the Sketchies who joins with the couple. I found him very sympathetic as he wants to revive his fellow Sketchie friend who was killed in front of his eyes by the Alldunns while also trying to survive. He has a legit fear of being killed since the Alldunns could kill him and his kind with impunity which I found to be extremely relevant given the sociopolitical aspects here in America. He was a standout character in The Painting.

With all of that being said, just because something has great production values doesn’t mean it’s a high-quality film. I found The Painting to be severely flawed and even insulting as a movie. Most of the other characters were archetypes and stereotypes who barely felt like real characters. There were scenes despite being well-animated, can be lackluster. During the festival scene, I was instantly thinking of the festival of fools scenes straight out of The Hunchback of Notre Dame which I found to be un-creative. The classist/racist themes were very oversimplified and the ending really contradicts the message since it implies that the only way the other characters can be accepted is to be just like the Alldunns AKA the dominant society in the painting. Yes, the Grand Chandelier (the leader of the Alldunns) gets embarrassed at the end, but the implications of everything else ruined it. Speaking of that aspect, there’s a very unfortunate implication with one of the names: Halfie. I get that it’s a reference to those characters being roughly half-finished, but that can also be a slang term for those who are biracial I wouldn’t blame anyone of mixed-race descent if they were offended especially since those characters become victimized by the Alldunns’ bigotry which really doesn’t help. This is just on the levels of bad as that grossly overrated film The Rabbi’s Cat which had its own overt racist issues, but the nuances of the class system are fallacious and intellectually insulting.

The Painting is seriously one of the worst films GKIDS has ever released. I don’t care how many of their films won awards and have been nominated for Oscars; not every distributor has star-spangled awesome movies. The animation is certainly the zenith when it comes to the production of the film. The music was certainly decent, too. However, the storytelling is riddled with a strawman of a moral that’s hypocritical. For something that’s supposed to have an anti-racist message, is ironically very bigoted with how everything is solved with the characters in the lower castes being painted up to look like the Alldunns. The Painting is something you should skip, so avoid this overrated dreck.

Adjustable Point System:
Add 2-4 points if animation means everything to you.
Add 1 point if you really like art.

Content Warning: The Painting might have a childlike presence in its storytelling, but I would recommend it for teens and up. There’s the Florence character who is a living nude painting which would make Jessica Rabbit look like a nun by comparison. There’s some language and one of the sketchies gets offed by a gang of Alldunns which comes off as a lynch mob in that case. There’s also some fridge horror of Gum carrying his friend’s body around everywhere in order to be revived.