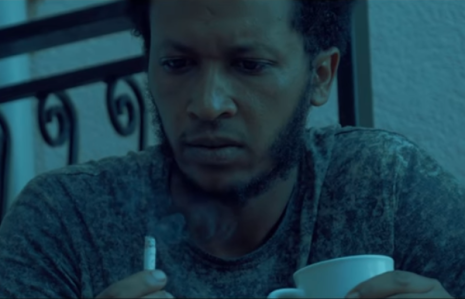 Much like my previous reviews with Kankuran or to a lesser extent The Trader (Sovdagari), I’m once again covering a movie from a country most people probably haven’t heard of. In this review, I’m critiquing a short film straight outta Eritrea. I started to check out some of that country’s cinema after hearing about the amazing news earlier this year where that nation and Ethiopia had a watershed moment where they had an epic peace deal all done by both countries’ respective leaders by themselves. They opened up the borders, allowed flights, started doing business with each other, and some relatives were able to be reunited after being separated for over twenty years.

Now that I got the brief news out of the way, let’s get on our way and check out this little film from the director Mebrahtu Ghirmay.

The Unfinished Cigarette is about a screenwriter named Danny. He is trying to come up with a plot for a movie, but is unsatisfied with his work. After moping around while having writer’s block, he finds a cigarette that dropped from a level above his apartment. Danny finds out that the cigarette came from a woman who lives above him whom he wants to work with. He meets up with her the next day while reading some Ugandan poetry and they chat it up. The thing is this unnamed woman is interested in acting in his movie, but things get strange as he finds out she’s married. The plot of the script involves a housewife killing her husband before leaving for another man. The lines of reality and fiction become blurred with these stories.

This was certainly an intriguing short film. I full expected this to be a straightforward romance or drama piece, but I did not see this developing into a much darker plot. It certainly kept me on my toes as to what was really going on. I’m not sure if Mebrahtu Ghirmay watches anime, but I have noticed a Satoshi Kon influence in this short film especially with the psychological aspects and the convergence of reality and fantasy much like Perfect Blue, Paprika, or Millennium Actress. He’s not ripping off that late animator like how Christopher Nolan did with Inception (I said so in my Paprika review!), and Ghirmay certainly has his own unique flair. The camera work was great, too. Anyone who thinks all African movies are all low-budget pieces need to slap themselves. The usage of cool colors, lighting, and ambience really add to the film. The Unfinished Cigarette looks good and it’s certainly a movie where you can’t turn your brain off.

Although this short film was a fine work, there are some issues that must be addressed. The subtitle work suffered from multiple typos and other errors. I still knew what was being said, but it got really distracting. One thing I could never figure out with Danny is his tendency to flip-flop with different languages when he talks. He’s speaking Tigrinya one moment and then says whole sentences of English the next, and I couldn’t understand the rhyme or reason why. There is also one element of production that did hamper this short film for me. Without going into spoilers, there’s a gruesome scene where someone is holding a bloody knife, but the fake blood looked way too thick for a scene like that and it almost looked like ketchup. The cinematography was great, but that part of the third act looked superficial.

The Unfinished Cigarette is certainly a creepy thriller that one should check out nonetheless. The usage of lighting, coloration, and camera work certainly stand above so many other indie productions. The plot has enough twists and turns to keep the viewer interested. I’d dare say that it would take multiple views to really know what’s really going on with how much was real and how much was based on Danny’s script. I do wish the subtitling and some of the props had as much quality of the film though. Definitely check out this Eritrean psychological thriller whenever you get the chance.

Adjustable Point System:
Add 1 point if you like psychological thrillers or dramas.
Subtract 1-2 points if you like your movies to be more straightforward.

Content Warning: The Unfinished Cigarette is best for teens and up. As one can guess from the title, a cigarette is a plot point and there’s smoking and drinking going on. The plot of the film and Danny’s script involves murder which does get bloody, but not overdone. The psychological elements get disturbing as one wonders if everything is a delusion or not.