The Piano in a Factory Review 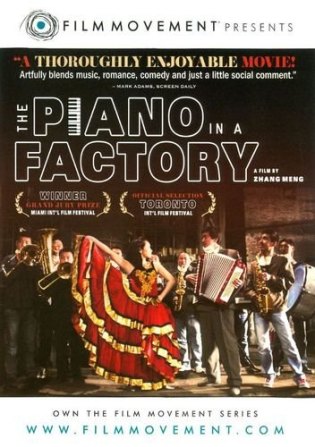 -Chen’s ex-wife Xiao Ju is played by a Korean actress named Shin-young Jang. She has appeared in Bride of the Sun, Radiant Office, and the Korean remake of Suits. Yes, South Korea adapted that show in their country.

-This is the second film from director Zhang Meng, but The Piano in a Factory is his first non-documentary film.

-Hilarious in Hindsight/Music Fan Bonus: In the earlier part of the film, Chen is told to “Listen to your [his] heart”. Try not to think of that Roxette song. Try REALLY hard not to think of that song. Also, one of Chen’s daydreams involves him literally playing piano in the dark. You know, like that other 80s song by Brenda Russell? That’s the same song that “I Cry” by Flo Rida sampled for those not familiar with older pop and R&B tunes.

It has been a long time since I’ve covered Chinese cinema. I almost forgot about the huge movie scene even in the indie circuit. That country is second only to America when it comes to raking in profits due to their autonomous nature of making their own mainstream movie system, too (yeah, they get imported here from time to time, but still…). It was as good a time as any to revisit China via their movies, so I scoured Film Movement’s catalog involving that country.

Practicing reviewing these movies is almost like practicing some scales and arpeggios. Yes, I just referenced a certain animated movie in that last line, but it works here.

The Piano in a Factory involves an unlucky factory worker named Chen Guilin. His now ex-wife leaves him for a wealthy businessman. They discuss the regal ramifications of this divorce. There is one crazy addendum that involves their daughter Xiao Yuan. In order for him to regain custody of her, she has to get a piano. This causes conundrums since he can’t take her to play piano in his ramshackle apartment complex, can’t borrow enough money to buy one, tries stealing that instrument at one point, and tries making a cardboard piano that obviously can’t make a tune. Chastened, Chen tries to get his co-workers, friends, and bandmates to try and make a piano at his place of employment in order to get custody of Xiao Yuan again.

This certainly was a quirky, yet understated film to check out. Chen’s situation is certainly unlucky, but he really wants to do what he can to be a father to his young daughter and to make sure she completes her dream of being a talented pianist. His head also gets into the clouds as he imagines dull or weird elements of his life having cinematic qualities such as dancers, seeing a karaoke party as a big music video, or when he and his friends try to steal a piano, the scenery and aesthetics parody something out of the Ocean’s Eleven series. I could tell there was a huge influence of 8 1/2 in this film as the scenery flips between the realistic filming style and the higher-budget and more extravagant dreams he has. His demented form of optimism was a bit catchy even with a simple line such as “If you’re worried about being laughed at, then you won’t get a penny”. The sound design works pretty well here with the background music. One funny, yet effective example involves Xiao Yuan playing Mario Brothers on the Nintendo and once he makes a big mistake, she messes up, and the downer ditty whenever Mario gets hit plays in slow-motion and it repeats when he sees the divorce papers. It was a nice touch and the other examples work very well here.

The Piano in a Factory does make some dodgy notes though. For starters, the final act does drag a bit which is sad because it was consistently well-paced until near the end. The finale is a good one, but it got to be a chore once it got closer to the ending. While the sound design is good, it does falter when the piano playing gets tinny and sounds too inorganic for that particular scene in said finale. I also have to be a bit careful talking about this part, but it’s hard to ignore. This is a Chinese movie where the plot is reliant on a piano, so that could add some unneeded stereotypes given musical correlations to different races, so that needs to be addressed. Also, some events happen because of plot conveniences or forced conflict which felt a bit artificial to me.

This film from Zhang Meng was certainly worthy though. There was a healthy balance between the dramatic and comedic elements at play, so one could say there was good harmony between those aspects. The cinematography worked with how it flips from gritty to bombastic whenever Chen has a daydream or vision of his plans. I do wish the sound design was more consistently good and didn’t falter in parts of the plot. The Piano in a Factory is a fell-good tune despite its shortcomings.

Content Warning: The Piano in a Factory should be fine for teens and up. There is some drunkenness and gambling going on with Chen and the crew. One character threatens to kill himself to avoid getting beat up by Chen for stealing. There is language that does get strong at points, too.