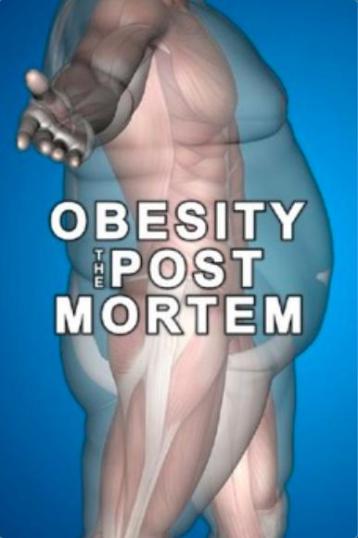 -Obesity: The Post Mortem was directed by Melanie Archer who worked on Timewatch, The Minoans, and The Spartans.

One topic that has been making the rounds for years is the concept of obesity. In America, that’s now considered a disease and other nations have been dealing with an increase of overweight people. However, there is one aspect hasn’t been covered in these medical studies until quite recently. What does obesity do to someone when they die? Does it make a difference in speeding up death in a person?   It’s up to a couple of morticians Dr. Mike Osborn and Carla Valentine as they inspect a portly cadaver sent to them from a crematory from California all the way to England.

Obesity: The Post Mortem is the first major documentary that examines what the human body is like after death when there’s a lot of fat in it. Dr. Osborn and Dr. Valentine get the cadaver as they go through different sections of the body to find out the effects of this woman. In addition to examining several organs, there are various interviews interspersed from overweight and obese people talking about their experiences living with their physiques. Some have been naturally on the pudgy side while others had situations out of their control which caused them to gain weight. This documentary deals with these medical findings and with the lives of those interviewed in between.

This was certainly an unexpected, yet informative documentary. Things did catch me off-guard like some of the findings and also with Dr. Valentine looking like a punk rock Ariel who could fit in one of the NCIS or CSI shows as that perky mortician archetype, but she was very adept at her particular job. The detail about the cadaver was certainly interesting even though they don’t pull punches on what the effects were (more on that later). The interviews with the obese subjects were actually convicting. A documentary like this could’ve easily been fat-shaming fodder which would be very uncool, but I liked how these people talk about their experiences being bullied like how one man got the nick name of Fat Bastard (yes, just like the Austin Powers character), how one woman had thyroid issues which causes her to uncontrollably gain weight, or how a different woman suffered from binge eating disorder which she was still recovering from. That was a very respectful touch as the people try to live their lives while also want to shatter stereotypes involved with their weight.

While Obesity: The Post Mortem was a good watch, there were some shortcomings that were too big for me to ignore (no pun intended). Remember how I said that the details were very gritty? Yeah, they go all in with the blood, guts, and flesh. I thought they went overboard with how the doctors said the fat was like butter or fatty capsules were like edamame beans which was disgusting. Trust me, don’t eat anything while you’re watching this movie much like how you’ll need a tissue box while watching Grave of the Fireflies. You’ll thank me later. There was an obvious hypocritical element with Dr. Osborn. He’s certainly efficient at being a mortician, but let’s be honest…he’s a very big guy. Dr. Osborn shouldn’t be talking about adverse health effects of obesity when some of the interviewees were thinner than him. While the interviews with the overweight people were a nice touch, they end up getting preachy near the end like how the subjects talk about their lives or goals.

Obesity: The Post Mortem was certainly a nice surprise even if got too gory at times. The details in the research were certainly unexpected in different ways. I also give them props for having overweight people talk about their experiences since it really gives a different edge to the film and removes a ton of fat-shaming bias. I do have to drop the points a bit for the hypocrisy of Dr. Mike Osborn and with some preachy elements in the final part of the film. Definitely give this a watch, but just don’t watch this while you’re hungry. Just saying.

Cons:
-The autopsy gets too gory and disgusting
-Dr. Osborn talking about obesity despite being fat himself
-Preachy messages near the end

Content Warning: This documentary isn’t for the youngest viewers and that TV-MA rating makes sense. Most the reason for that rating is that the autopsy is uncensored with tons of blood, guts, tissue, and medical nudity on display (the cadaver is also female, so there are shots of naked breasts and genitalia). Besides that, there’s language and some dark subject matter like eating disorders.