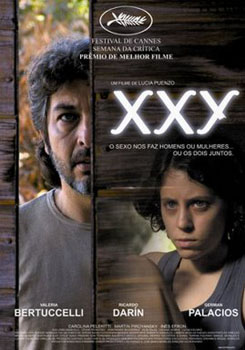 -This is the directorial debut of Lucia Puenzo who also directed The Fish Child and the Cromo TV series.

-Alex Kraken is played by Mexican-born, Argentinian-based actress Ines Efron. She was also in Glue and Puenzo’s The Fish Child film. No, she’s not related to Zac in case you were wondering.

-XXY won the Silver Condor Award for best film in 2007. It’s the Argentinean equivalent of the Oscars and Zama got that award, too.

Much like another Argentinean film Zama, there was a tiny reason why I wanted to review a title such as this one. I needed representation in the alphabetized list on my blog. I seriously had a hard time finding out about non-mainstream movies that start with X (don’t even think about suggesting anything involving X-Men to me), so it really took some time and effort to find something that I could review. The title caught my eye, but the film itself would certainly be added to my controversial movie portfolio as I’m wont to cover movies that would make most people uncomfortable including myself. Argentina, it looks like you helped me kill two birds with one stone with my reasoning for reviewing this little film that indie specialists Film Movement brought over stateside.

How does the debut work of Buenos Aires-based director Lucia Puenzo stack up as it gets the Iridium Eye treatment?

XXY takes place in a coastal town in Uruguay and it involves an Argentinean family who moved there called the Krakens. The father Nestor is a marine biologist while his wife Suli is a stay-at-home mom. Their daughter is Alex who was born with both female and male parts although she tries to come off as female in her personality most of the time. She has to take medication and treatments to keep her symptoms under control. The Krakens escaped from their former country with the bullying their family suffered once word got out about their intersex daughter. However, Suli invites her friends from Argentina where the head of the house is a surgeon and he has a son close to Alex’s age named Alvaro who tries to develop a bond with her despite her gender-neutral looks, piercing sarcasm, and physical condition. Things get worse when Alex neglects to take her medication which diminishes her femininity while some masculine traits (psychological and physical) slowly take over. How does Alex deal with her condition and find an identity where one can live a so-called normal life despite having three gender chromosomes. ?

This was certainly a unique film about a subject that never crossed my mind. I will say one of the strongest aspects of XXY was definitely the acting. Ines Efron did a great job playing a character with that condition as she’s brash and socially awkward, but she also portrays both feminine and masculine sides to Alex’s personality without being preachy or too obvious about it. Alvaro, played by Martin Piroyansky was able to sell the conflicting emotions of his attempted friendship/love of Alex with his facial expressions and nonverbal gestures. I have to give points to Ricardo Darin as Nestor who is able to be there for Alex when she needs fatherly support. It was also fascinating seeing that character believing that she is perfect despite her gender condition and seeing her as a human worth caring about instead of a freak or monster like others who find out in the Uruguayan village or back in their home country. The visuals worked. Even though it wasn’t big budget quality, I liked the more subdued camera shots and the usage of cool colors (mainly) blue which evokes the right kind of emotions and plays on the water theme. Besides Nestor being a marine biologist or the fact that they live in a coastal area, there’s the duality of water used as life and chaos as a subtle motif. If you pay attention to the family’s last name Kraken, it only adds to the maritime themes if one really thinks about it. The score and background music was nice and subtle. The usage of acoustic guitars, light ambient noises, and some tastefully added vocal melodies was a good touch.

XXY did have issues though. This film went overboard with some of the sexual themes. I understand that Alex’s intersex condition plays a huge role in the film, but I thought it got too much with the nudity and the sex scenes even when the latter became legitimate plot points for her character. I thought Suli Kraken was very underdeveloped as a character. Besides her being Alex’s mom and inviting her friends from Argentina over, she didn’t have all that much of a personality or any development. There was also the sexual assault scene that happens later on which frustrated me in its aftermath. Sure, Alex does get traumatized, and rightfully so, but I was infuriated that the boys responsible for that atrocity get to walk scot-free. No, Vardo and Nestor tongue-lashing them doesn’t count. I get the logic as to why it wouldn’t be reported lest Alex’s condition becomes known all over the village (and possibly then some), but I’m sorry. If I was a dad and I found out my daughter was violated, then I would be in jail and that’s all I’m going to say about that matter. Maybe the lack of severe consequences is like some sick dream of all these bigwigs trying to escape the #MeToo treatment. Did I forget to mention that XXY was directed by a woman? Yeah, think about the implications of that for a minute.

This Argentinean drama did have unique things going for it, but I couldn’t shake off some of the dubious things about this movie. I did like how Alex was treated as a character who happens to be intersex as opposed to portraying her as an intersex character where her condition is her only defining thing (there’s a difference). The acting is superb and the visuals are quite poetic in presentation. I did have umbrage with certain elements of the plot and I really wanted the sexual content to be toned down for this film. XXY did succeed in some areas, but it failed in others which made it an average film in hindsight.

Pros:
-Splendid acting from most of the characters
-Great cinematography and editing
-Original storytelling

Cons:
-Rampant sexual aspects
-Unfortunate implication with the aftermath of Alex and the three boys
-Suli was very underdeveloped as a character

Content Warning: XXY is only for older audiences. The intersex aspect of Alex’s condition is certainly a big one and how she handles her condition can be disturbing like how she makes love to Alvaro in one scene. There’s strong language and one scene where Alvaro’s dad actually wonders if his own son is gay by saying a certain homophobic slur. There are multiple nude scenes and Alex gets gang raped later in the film. One supporting character in the second half of the film is also revealed to be transgender (born female, but is a man currently).