Above Then Beyond Review

-Spoilers will be mentioned in this review. Part of this involves a controversy associated with this short film.
Fun Facts:
-Above Then Beyond was a student film that was for ESRA (Ecole Superieure de Realisation Audiovisuelle) which is a top film school in Paris, France. This is the same school that has alumni such as Pierre Morel (director of Taken), Vivianne Chaix (sound engineer for Slumdog Millionaire), and Julien Maury (director of Inside) just to name a few.

-Director Yannick Bancheareau is currently an employee at Massive which is owned by UbiSoft.

-Controversy Alert: Hold up, so it’s not just Disney proper who ripped off other forms of animation? There have been multiple accusations against Pixar for plagiarizing Above Then Beyond to make Up which it predates. Here’s an article about this matter from dbmoviesblog’s page.

I get to immerse myself in French animation again. I’m sure that country is second only to Japan when it comes to representation on Iridium Eye. France certainly has a huge animation scene which I don’t deny and I’ve reviewed multiple movies there. I don’t believe I checked out a lot of the short films from that country, so I thought I would give it ago after discovering this film.

Okay, there are obvious ulterior motives given the reputation I’ve gotten on WordPress for covering certain types of film issues, but don’t worry. We’ll get to that later.

Above Then Beyond is about an elderly widow who lives in a two-story Victorian house. Her hometown has increased with an urban sprawl and she’s forced to be evicted (most likely for more buildings or a highway). She doesn’t want to be kicked out of her own house and hatches a plan to keep her own home using some unconventional means.

This was a pleasant and heartfelt watch. In its short time, the viewer can understand where the woman is coming from in trying to protect her home against the rapid urbanization of the city. You could see the vast time-lapse with the sepiatone at first before buildings pop up left and right before it switches to a more colorful (albeit with a dark palette) hue as it goes to the present day. The atmosphere worked with this tiny house that is dwarfed by an urban jungle that has numerous skyscrapers and high-rises around. There’s definitely sympathy there and one could make a case of the story being an anti-gentrification piece of sorts which is ahead of its time. I mean, how many animated projects would even cover a topic such as that even now? I will say the music was on the simpler side, but still effective with the piano and guitar music. Her solution to avoid the eviction involves using various cloths in the house stitched and sewn together before draping it over the roof. Why is that? The answer is quite simple. She’s going to turn her domicile into a giant dirigible.

Think about it, an older person who has a dead spouse turns their house into a flying vehicle and tries to escape eviction. SOUND FAMILIAR, PIXAR FANS?

Hi, there! I’m Curtis and this review is another installment of “Hollywood is filled with cinematic thieves”. This is something Disney-related that I get to call out and the subject that’s being ripped off isn’t from Japan or South Africa like certain other examples I’ve covered before (looks like I can’t be called a reverse racist in this case to those who think that’s a legitimate term. You’re welcome!). Despite not being a Disney fan, I did appreciate Pixar for at least trying with original screenplays more than the company that owns them. Well, it looks like whatever goodwill I had towards the famous desk lamp studio just got diminished. Up totally got things from Above Then Beyond. Let’s see, we have a widowed senior citizen, facing eviction, and escapes by turning their house into a hot air balloon of sorts. Yes, I know their methods of making their respective houses fly are different, but the end result is the same. Sure, the Latin America aspect is unique to Up instead of Above Then Beyond, but check out the scenes and tell me no one at Pixar saw this. 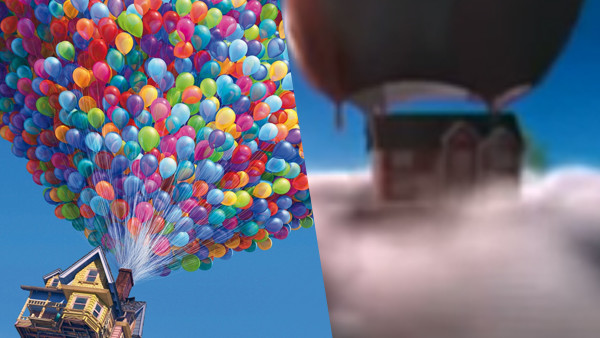 Not only that, but the film school has a partnership with Pixar, so it would be impossible for anyone from that Disney subsidiary to have not seen this. This scene comparison with the flying houses as long-distant shots should be up there with other examples of film plagiarism with other stolen scenes like the “floating in a hotel lobby” scene in the Paprika/Inception case or the “dead father lion spirit talks to son in the night sky” scene in the Kimba the White Lion/The Lion King plagiarism controversy to name a few. Speaking of the latter, if I were to rank Up on the shameless ripoff scale from 1 to The Lion King, I would give this a 7. I know there are some divergences, but there is no way that no one at Pixar didn’t see this French short film when they made Up.

Hilarious in Hindsight moment: Since I reviewed My Dog Tulip which features Christopher Plummer, does that make him the third example of an actor who was been in a work of plagiarism before much like how I reviewed something with Jeremy Irons (Trashed) and two works involving Ellen Page (Wilby Wonderful and the English dub of My Life as a Zucchini)? Think about it for a second.

Above Then Beyond doesn’t go to infinity or past that (Oops! Wrong Pixar movie pun!). The biggest thing for me is the aged CGI. It was definitely made in the mid-00s and it was on the blocky side. Much like Voices of a Distant Star, the fact that this wasn’t made with a studio behind it can really age it faster in most cases. I was not a fan of the characters having no names which were frustrating. To be fair, there aren’t many characters, but that was a choice I wouldn’t have made if I was in the director’s chair. It does fly by (no pun intended) really quickly, so they could’ve changed the pacing a little bit or extended the story for even just a few more minutes.

This student project was a good watch even if it wasn’t groundbreaking. The story is certainly universal and could people could certainly get involved with it. The music was decent and it did tell a complete story in a very short period of time. I know people will bash Above Then Beyond until they realize that Up came afterward, unfortunately. The aged CGI and unnamed characters did hurt this, but I’m willing to give it an extra point because of the plagiarism controversy as I’m wont to do much like La Maison Noir: The Gift and The Curse last December. Give this a shot to see this short film.

Content Warning: Above Then Beyond is a safe watch. It’s implied the woman’s husband died and the concept of gentrification and urbanization might go over the heads of the youngest audiences, but that’s really the worst thing. It’s good for all ages though.